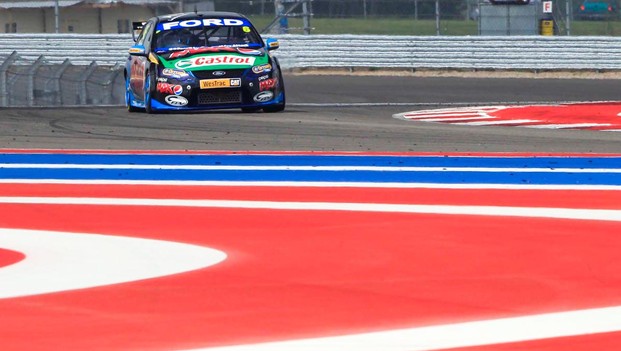 Stung by a disastrous Austin 400, Will Davison says he andFord Performance Racing must redouble their efforts if they are to matchall-conquering Red Bull Racing in the V8 Supercars championship.

And to rub salt into the would he slipped back from secondto third in the championship, passed by RBRA’s Craig Lowndes - the driverDavison was trying to pass in the final race when he locked up the rear brakesof his Pepsi Max Falcon and slammed into the GRM Fujitsu Holden Commodore!

“It was a very tough weekend for the team as a whole,”Davison told v8supercars.com.au. “We can only try and react positively andproductively from it and work harder.

“The cars weren’t good enough, this type of circuit doesn’tseem to be good to us, so we have to fix that. We were up and down and all overthe place.

“You put yourself back in the pack then you get involved inincidents and you can’t win championships. You don’t even look at the point scorewhen you are not fast enough like that and teams are dominating like that. They(RBRA) deserve to be where they are.”

He had been second fastest in Friday practice but admittedit took him and engineer Grant McPherson until the final race to tune the carto the track.

“We made another change to the rear-and we went in the rightdirection. I only did three laps but I could tell it was by far the best it hadbeen in any race… I was all over Lowndes, I tried to pass him three times, Imade a move on him which didn’t quite stick and took out an innocent party.”

Davison said the big, fast corners at CotA did not suit theFPR Falcon FG. Disconcertingly, it is a problem that has translated from lastyear into FPR’s new Car of the Future racer.

“We are looking into that, we are trying to analyse why weare weak in certain areas at the moment,” he said. “We have strengths andweaknesses and we have to dig deep and analyse why.”

While the racing wasn’t kind to him, Davison did back V8Supercars’ venture to the USA: “I think it is really cool, I think the receptionfrom all the locals has been great. They really enjoyed this form of racing.

“I think we can improve the racing with somechanges to the formats too… I think if the races had gone on longer then theracing would have got better and better as people’s tyres degraded.”

Will Davison  ›
15' Pepsi Max Crew ›
2013 Austin 400  ›
Stay In The Know
Sign up to the Virgin Australia Supercars Championship Newsletter
We use cookies to ensure that we give you the best experience on our website. If you continue to use this site we will assume that you are happy with it.Ok