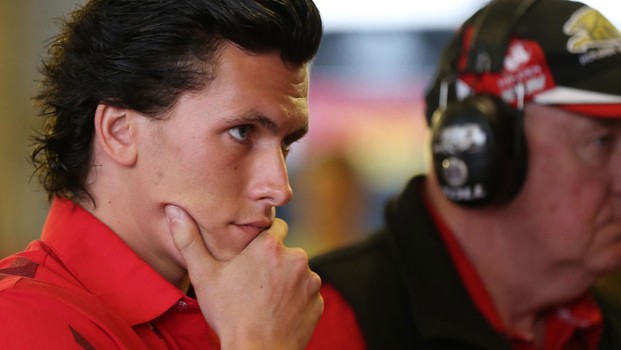 Holden Racing Team boss Ryan Walkinshaw has emphaticallyshut down the latest rumours the factory operation is up for sale.

And at the same he has declared his belief HRT will be fullycompetitive by the season of endurance and remains fully committed to knockingoff fellow Holden factory team, Red Bull Racing Australia.

HRT hasn’t won a race since the 2011 Supercheap Auto Bathurst1000 and is currently undergoing a very public ands painful development processas it tries to extract competitive pace from its Car of the Future chassis.

The rumour HRT is for sale was a common discussion point inthe Circuit of the Americas pitlane during the Austin 400. It isn’t the firsttime such chat has surfaced since the death of team founder Tom Walkinshaw in 2010and Ryan’s take over of management on behalf of his mother Martine and youngerbrother Sean.

“This is my father’s team,he started it, we are going to keep going forward with it and we are fullycommitted to getting it back to the top. We have got to get down and startbeating the Red Bull team - that’s our main objective.

“Red Bull are clearly thetop of the game at the moment and they have been for the last couple of yearsand our goal is to take over that.”

The Walkinshaw family notonly owns the racing team, but also the Holden Special Vehicleshigh-performance road car business which Tom Walkinshaw established in 1987 atHolden’s behest when its deal with Peter Brock collapsed over the polariser.

Importantly, Holden ownsboth the HRT and HSV names which makes the relationship between the two partiesmore complex and intimate than the usual sponsor-team deal.

“Holden wants to see betterresult just like we do,” said Walkinshaw. “They have been incrediblysupportive, they understand what we are trying to do and obviously we have tocontinue to step up our game because Holden is our major sponsor and we have tolive up to their expectations.”

Austin was the first chancefor Walkinshaw to watch Garth Tander and James Courtney race and the SteveHallam-led team in action since the Australian Grand Prix meeting. It was alsohis first race with the team since a new font-end went into the car at theChill Perth 360. Further suspension upgrades were installed for Texas andWalkinshaw confirmed more new components were coming.

“We have been testing for the last two racesand it has affected us because we have not been able to just go out and practiceand try and get good times,” Walkinshaw explained. “We have been trying to getsome data to try and understand the car and understand which direction to takeit.

“But we have a test daycoming up soon so by Darwin we will have learned a little bit more and weshould be looking very good for the enduros.”

Walkinshaw was lessforthcoming when it came to negotiations with Courtney, whose lucrative dealwith the team expires at the end of 2013.

Courtney’s shrewd managerAlan Gow is said to be touting his service both here and overseas as thereseems zero prospect of HRT offering him big bucks to stay in the current tightfinancial climate.

“We are fullysupportive of James within this team and will continue to be so,” Walkinshawsaid. “It’s going to be up to James to choose either way but when it comes tocontract negotiations with our drivers in any of our three cars that’s notsomething I am going to start to go into any detail about.”

23/05/2013
Related Content
HRT still has plenty of work to do: Hallam  ›
16/04/2013
Courtney Encouraged by HRT's Podiums  ›
08/04/2013
15' Holden Racing Team ›
Stay In The Know
Sign up to the Virgin Australia Supercars Championship Newsletter
We use cookies to ensure that we give you the best experience on our website. If you continue to use this site we will assume that you are happy with it.Ok