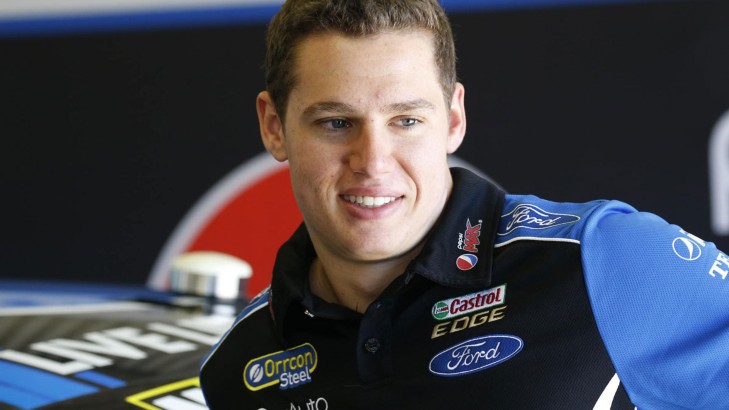 Cameron Waters believes he and veteran racer Russell Ingall will be a dark horse at this weekend's Castrol Gold Coast 600, though his first focus for the race meeting is to finish.

The 21-year old takes the reigns of the Pepsi Max Ford Falcon FG X from injured Chaz Mostert for this round, as well as the upcoming Auckland and Phillip Island events.

The pair is an interesting combination - Waters is hot property as he looks to break into the main game and Ingall can't seem to get out!

The 51-year old proved a valuable asset returning from retirement to stand in for James Courtney at the Holden Racing Team and now switches to blue to suit up with Waters and challenge his old foes at a track where he has a stellar record.

"I just want to go out there, make sure I finish, and get points for the team," Waters told v8supercars.com.au.

"I think if we play all our cards right we can have a really good showing, get in the top five, maybe a podium.

"I really don't know what to expect at the moment - but I think we're a dark horse, that's for sure."

Ingall, tagged 'The Enforcer', is known for his aggressive driving and unapologetic attitude. Waters thinks this year, as leader of the Dunlop Series, he's shown that side of himself on track too.

"It's really awesome to have Russell," Waters said.

"Hopefully I can try and learn a few things off him this weekend and have a good run for him as well ... I think it's just going to be a whole lot more competitive in the main series.

"They race a lot harder, so I think that'll be good, I'm pretty excited about that.

"I'm probably one of the more aggressive guys in the Dunlop Series so I'll probably fit right in in the main series!

"It's just all new for me so I'm not really sure what to expect until I go out there and see for myself."

Waters raced at the Gold Coast event in a V8 Supercar last year with Jack Perkins - who Ingall drove with at HRT! - and has also been around the street circuit in Formula Ford.

But following this weekend he will have another new opportunity, filling in for Mostert at the two remaining sprint rounds at Auckland at Phillip Island.

While a drive in the main series seems like the perfect chance for an up-and-comer to show his worth, Waters will be focused on doing a good job for the team - which is after points for the teams championship - and keeping it clean.

"I think I've probably showcased what I can do in the Dunlop Series enough, I think for me it's more about going out there, getting some miles under my belt and just seeing what it's all about in the main series," Waters said.

"So I'm not going to try and go out there, drive the wheels off it and run into people, I just want to go out there and get some experience...

"I'm really excited about it - I'm glad the team picked me, they've obviously got faith in me to do the job and Chazzie would probably want me in the car as well.

Waters says his plans for next year are not yet locked in but pit lane rumour continues to link him with a main game drive in one of the Prodrive cars.

A driver for the Coates Hire Sydney 500 is still to be determined. Waters leads the Dunlop Series standings by 149 points, with that final round make or break for 2015.

The team wants Waters fully focused as he aims for the trophy, and the young driver wants to ensure he delivers this year after missing out in 2014.

"I'm not really sure what the team wants to do for Sydney yet - we're probably just going to get through the next few events, see how I'm going in the car," he said.

"If I'm driving it really well and getting a few good results they might leave me in it for Sydney - but priority for me is to make sure I finish off this Dunlop Series campaign well and if I don't have a distraction in the main series it'll probably help me.

"We'll just make that decision over the next few events, I guess ... if I miss out on doing the main game gig for Sydney I probably won't be that disappointed as long as I win the Dunlop Series!"

Prodrive Racing Australia today completed a full reveal of the Back to the Future promotion based around car #6 unveiling a "DeLorean with a difference" to mark the date Marty McFly and the Doc travel to in the future - October 21, 2015.