Cameron Waters has claimed his second win of 2021 in a dramatic WD-40 Townsville SuperSprint opener.

Waters was assured to his first win since May's OTR SuperSprint, and Tickford Racing's first in Townsville since 2015.

It came in a 39-lap epic which featured separate time penalties for Shane van Gisbergen and Jamie Whincup.

Whincup was second on the road but was demoted to fourth, with Anton De Pasquale and Chaz Mostert rounding out the podium.

It was an even start between De Pasquale and Waters, with Whincup shadowing the lead duo on the run to Turn 2.

As the leaders safely made it through Turn 3, Macauley Jones was turned in front of the pack and returned to the lane and into retirement.

Andre Heimgartner and Mark Winterbottom were also forced into pit lane after picking up punctures. 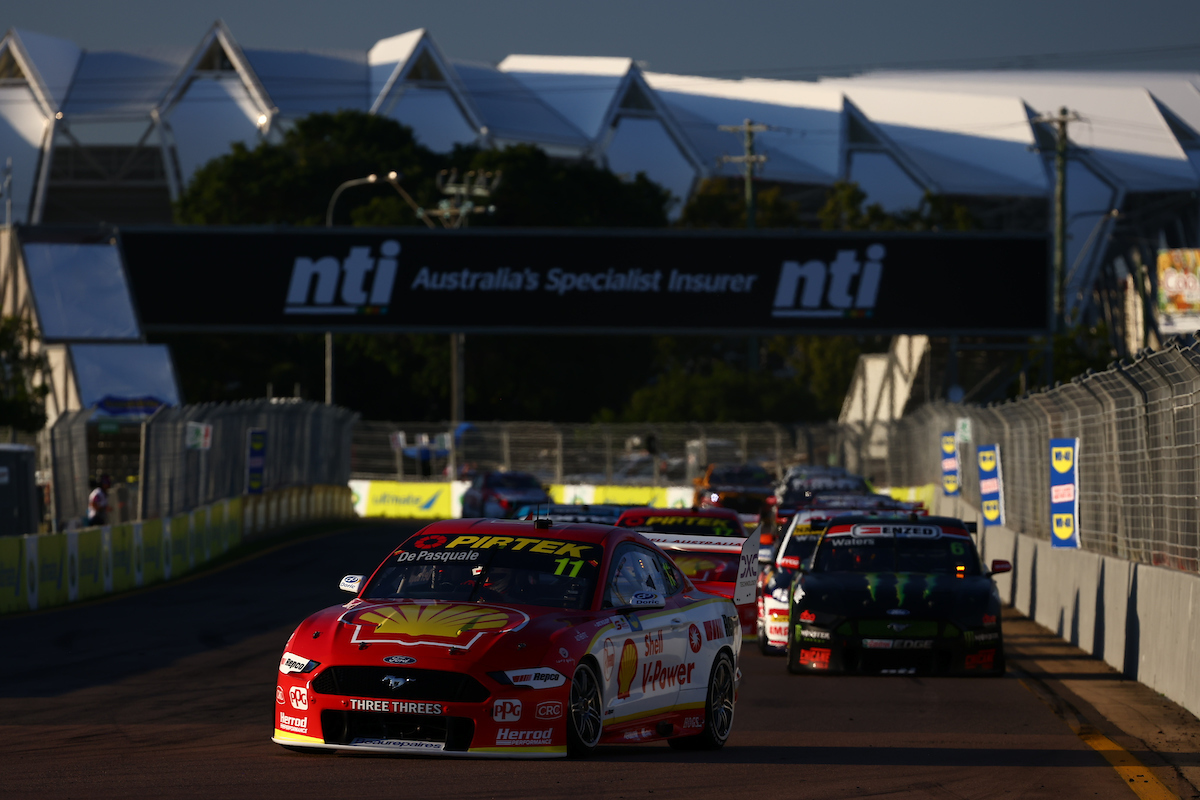 Waters inched to the rear of De Pasquale’s car into Turn 1, but was unable to make the move stick.

All the while, van Gisbergen had plummeted to eighth behind Todd Hazelwood and Brodie Kostecki, who pushed the #14 tools.com Commodore wide at Turn 13.

Whincup attempted to make a move of his own on Waters at Turn 5, helping De Pasquale build a margin in the lead.

Stung by a bold manoeuvre by Kostecki at Turn 2, van Gisbergen muscled past the #99 Boost Mobile Erebus Commodore at Turn 13.

Kostecki, who was handed a 15-second penalty for the Hazelwood incident, was pushed wide and onto the grass by van Gisbergen, who set off after the top five runners.

Van Gisbergen chased down and repeated the move on Davison, who was demoted to sixth after starting third.

The series leader’s charge, however, was curtailed after he was handed a 15-second penalty of his own over the Kostecki incident.

It did little to quell van Gisbergen’s motivation, with the New Zealander disposing of Chaz Mostert at Turn 11 on lap 12 for effective fourth.

On lap 16, Waters and Whincup opted for an undercut on De Pasquale.

De Pasquale stopped on the following lap, and was released into the path of Waters.

De Pasquale covered into Turn 2, but Waters claimed the effective lead before the two drivers arrived at Turn 3.

Mostert was brought in on lap 19 and regained effective fourth when van Gisbergen took his penalty at his stop on the following lap.

Van Gisbergen was followed into the lane by Davison, who lost even more time over a left-rear wheel nut drama.

Not only did Davison lose time in the stop, but his crew was unable to remove the tyre in the stop. As the pit sequence played out, Davison was 12th behind Scott Pye, who had made ground after starting 18th.

Six laps after his stop, Whincup was adjudicated to have exceeded the pit lane speed limit, and was also hit with a 15-second time penalty.

Waters backed De Pasquale into Whincup, with the top three covered by just under a second.

A lap 6 stop aided Tim Slade’s charge to effective fifth ahead of Nick Percat and James Courtney, with Hazelwood recovering to eighth.

Van Gisbergen quickly disposed of Davison and set off after Will Brown, was trailed Pye in ninth.

Percat fell into the clutches of the trailing Hazelwood and Pye, and locked up heading into Turn 11.

It enabled easy passage for Hazelwood and Pye, with Brown and van Gisbergen making it a five-pronged battle pack.

Pye and van Gisbergen continued their march through pack, both demoting Hazelwood and Brown to hold seventh and eighth with nine laps remaining.

Waters built a 1.2s gap on De Pasquale, who was being harassed by Whincup. 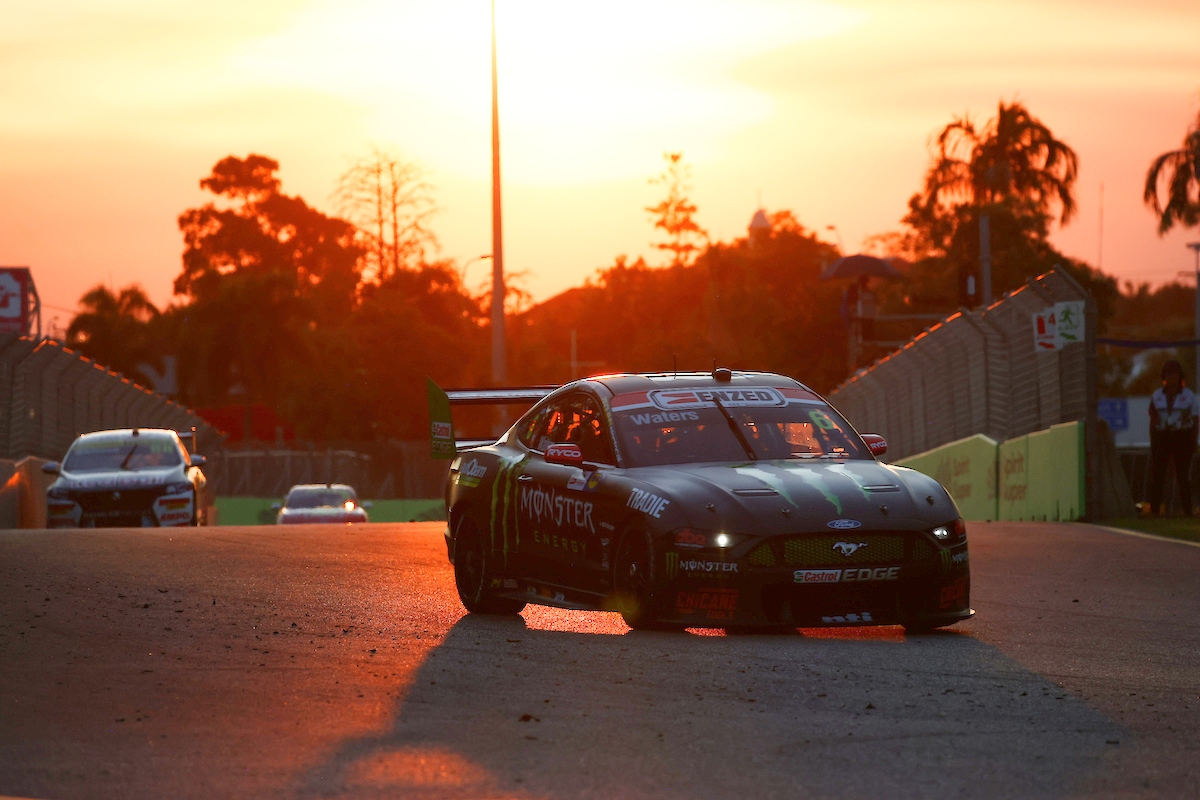 On lap 31, De Pasquale gifted Whincup second on the road with an error at Turn 11.

All the while, Mostert had played himself into contention for second, with the penalty still hanging over Whincup’s head.

Slade in fifth was 11.7s down on Whincup with seven laps remaining, with van Gisbergen clearing Pye and setting after Courtney.

Van Gisbergen made another decisive move, this time on Courtney at Turn 11, to claim sixth.

De Pasquale continued to fall off the pace and dropped to 1.7s off the rear of Whincup, who monstered the rear of leader Waters.

Mostert, bidding for a first podium since his Race 12 win in Darwin, gave De Pasquale little respite in the closing stages.

It was to little avail, with De Pasquale hanging on behind Waters and Whincup.

The revised margin between Waters and De Pasquale was 2.8s, with Mostert 4.4s from victory.

Whincup was classified fifth behind Slade, who inherited his best result of the season by just 0.6s.

Van Gisbergen and Pye crossed the line sixth and seventh ahead of Courtney, with Hazelwood and Brown rounding out the top 10.

It was an emotional result for Waters, who was without regular engineer Sam Potter, who underwent midweek surgery on his leg.

With Davison 11th, Waters regained fourth in the points standings. 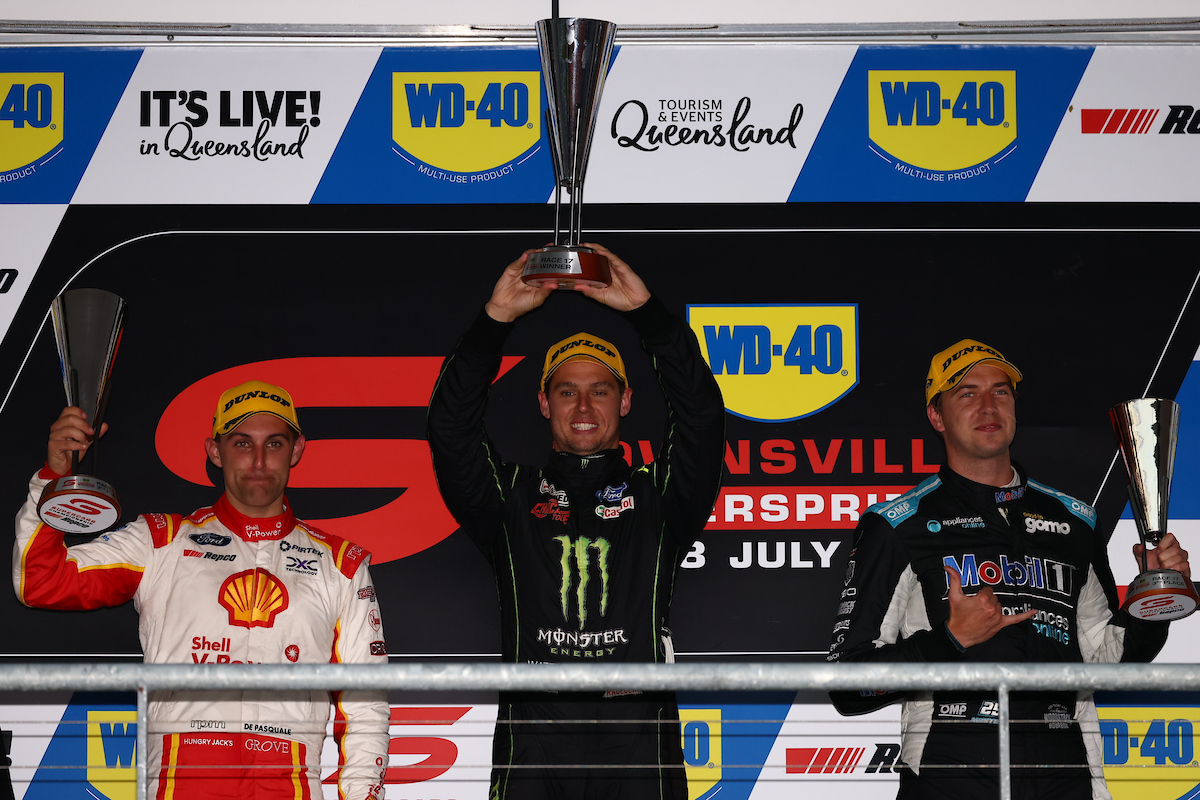 "The old over and under... I knew I had to do it then," Waters said of his move on De Pasquale.

"I'm so pumped. Obviously last week we got smoked, and to bounce back is unreal.

"Massive shoutout to Pottsy at home, he had a lot to contribute to this win, thanks to him.

"Ozzy [Nathaniel Osbourne] slotted in and did an amazing job for him."

De Pasquale was disappointed to fall short of a third career victory.

"He had warm tyres and I had cold tyres," De Pasquale said.

"You can go around the outside or down the inside, but I had no grip when I got there.

"We probably just pitted one lap too late, and that's it."

The WD-40 Townsville SuperSprint will continue on Sunday with two ARMOR ALL Qualifying sessions and Races 18 and 19.