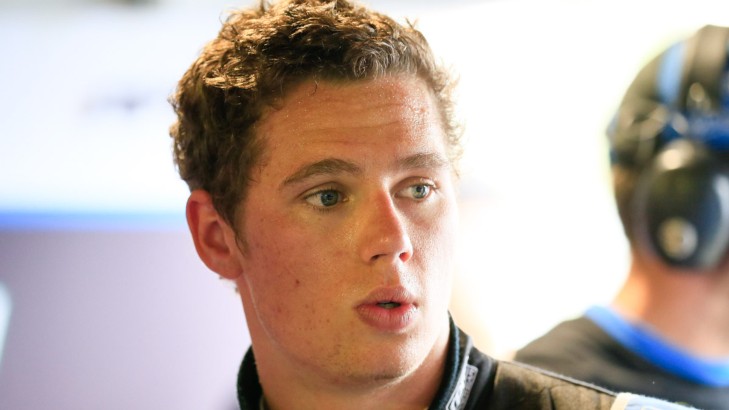 Waters was handed a pit lane drive through penalty for a bump on James Courtney, and was earlier involved in the multi-car incident that resulted in teammate Mark Winterbottom turning around on the first lap of the 69-lap race.

While Edwards was fired up on the TV coverage - and fiercely blamed Holden driver Courtney for that collision - there was ultimately no breach of the rules handed down by the stewards.

Waters - who has been standing in for injured Chaz Mostert and is expected to be elevated to David Reynolds' vacant seat with the team next year - was running 12th before the pit lane penalty taken on lap 62 of 69. He finished the race 22nd and came home 17th and 12th in Saturday's 60km sprints.

"He did an outstanding job - absolutely outstanding job. To be up there racing with those blokes, he proved he's got the skills and he won't be taking any sh*t," Edwards told v8supercars.com.au.

"He was fighting, he was doing everything he needed to do, so the only way to earn respect in this category is to fight back and he did that so he did a great job. Really pleased with how he performed on the weekend."

It was unfortunate Waters was involved in the incident that ultimately hurt Winterbottom - particularly with the Championship and teams championship at stake.

Edwards was coy about his comments on the broadcast labelling Courtney and Jason Bright "Holden morons" and being particularly scathing of the HRT driver post-race.

"I put my comments down during the telecast to heat of the moment frustration beyond belief," he said.

"It was like everybody, you had no vision of exactly what happened - all you could see was a front on shot and frosty comes into camera frame and all we could see is two Holdens there and nobody else. [We now have] the benefit of hindsight."

However one thing he did not back down on was his reaction to Waters' penalty for a tap to Courtney while his HRT teammate Garth Tander was trying to pass the Pepsi Max Commodore up the inside.

"That is the most ridiculous," he had said earlier.

"How you can blame Cam for that is beyond belief and fortunately some of our commentators have said the same thing.

"The reality is, where was he supposed to go? He had Garth well and truly wedged into his right side, he's looking into his mirror trying to avoid turning in on Garth - where's he supposed to go? He's meat in the sandwich and to blame his is just incompetent. Absolutely incompetent ... he copped the penalty during the race, there is no way of redressing it. Bargs [IPO Jason Bargwanna] has got his view, we have our view, we'll never agree, move on."

With Winterbottom able to power through the field and ultimately finish 11th after being knocked out of 10th, Edwards suggested it could have been worse. Playing with the big boys, there are ultimately going to be some hard knocks.

"It's all part of learning. He's racing with guys who have raced in the category for 10 plus years - 10 plus-plus years," he said.

"He did a fantastic job in the race, his pace was good and he's just made a small little error that's had a rather large impact on his teammate.

"Frosty ... ultimately got back somewhere close to where he was at the time.

"I'm sure they'll discuss it, but Frosty was actually quite calm about the whole thing post race anyway, oblivious to who it was that hit him.

"He just ... brushed it off as one of those things and was just pleased that he at least got back up to 11th place."

"All about the team"