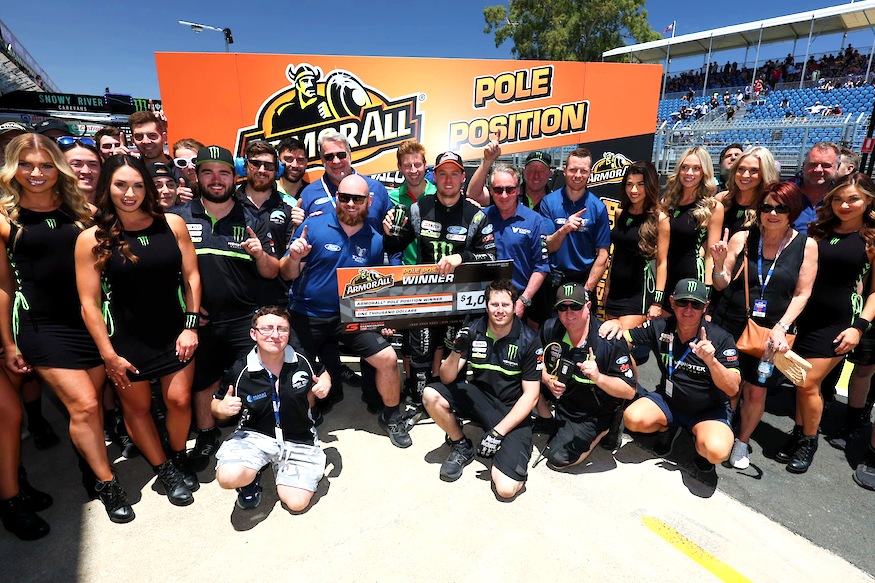 Cam Waters has dominated Saturday’s ARMOR ALL Top Ten Shootout, and will start from pole for Saturday’s Race 33.

Waters was 0.343s to the good after Saturday’s one-lap dash, and will start alongside Scott Pye.

Provisional pole-sitter Chaz Mostert could only manage the eighth-best time in the Shootout.

It was Waters’ season-leading 10th pole of the year, breaking the tie with Will Davison.

It was the first Shootout without a Triple Eight driver since Darwin 2019.

However, the repairs pushed into the cut-off time, with Randle to launch from 10th.

Waters recorded his pole lap despite losing the delta time data on his steering wheel.

“I needed that pole,” Waters said.

“I haven’t done a clean lap all weekend, so did it just in time for the right point.

“I can’t thank the team enough, they’ve given me a really nice car.

“Super pumped to be starting on the front row, we’ve got a good race car.

“Massive pat on the back for the #55 guys for getting Randle’s car out there."

The Randle repairs promoted Todd Hazelwood to first driver out, and he recorded a 1:20.009s.

Andre Heimgartner jumped to top spot with a 1:19.902s, with James Golding slotting in behind.

James Courtney, David Reynolds and Pye were then unable to demote the #6 Ford.

Anton De Pasquale was up to the second sector before he made an error at the final corner.

It left Mostert as Waters’ primary challenger, but he was a whopping 0.64s off the pace.

Reynolds was later disqualified from the Shootout over a technical breach.

Waters helped Tickford to its first Adelaide pole since 2016, which was ironically taken by Mostert.

The Ford squad last won in Adelaide courtesy of Davison in 2012.

Waters holds a 175-point buffer over Mostert for second place in the championship standings.

Series leader Shane van Gisbergen, meanwhile, will launch from 25th and last for the race.