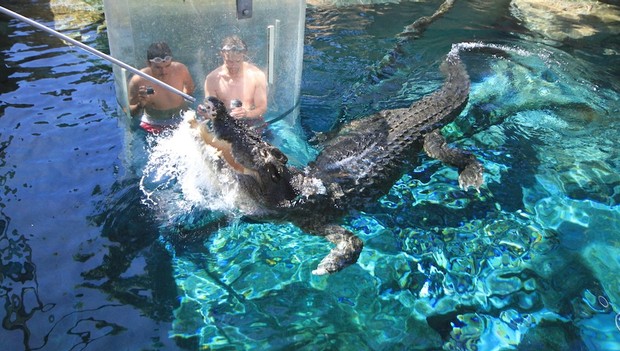 V8 Ute drivers Matt Nolan and Nathan Pretty faced off with the native Northern Territory crocodiles today at Crocosuarus Cove for a warm up to Round Three of the Auto One V8 Ute Racing Series – protected by Armor All – at Hidden Valley Raceway.

The two are right at home in the water. Pretty – a World Jet Boat Champion – was leading the V8 Ute Series, but engine issues in Qualifying during the Perth round hindered his weekend. He now sits in fifth, but enjoyed his time with the crocs more than sharing track time with some of the drivers.

“I was less scared with the crocs then I am racing against Ryal (Harris) and Jesus (Andrew Fisher),” explained the Melbournite.

Nolan is a former World Jet Ski competitor (sixth in the world in 2010) and Australian Jet Ski Champion (2010), and is a rookie this year. He owns his own electrical company based in Western Australia, and is learning a lot off teammate Pretty in his first year in the Utes.

“I had a ball (with the crocs), it was a bit nerve racking but a great start to the weekend. I can’t wait to get on the track,” Nolan said.

The two drivers both had a turn at feeding the crocs and even managed a touch of big “Denzel” (the 5.2m long Croc). They’ll join 30 other drivers on the grid this weekend including newcomers Ben Dowley (former Aussie Racing Car driver) and John “Spud” Wood (HQ driver).

2011 V8 Ute Champion Chris Pither will return to the field to replace Tony Longhurst, who has had to sit out this round due to a back injury.

After finishing 14th in last year’s Bathurst 1000 and racing in this year’s V8 Supercar Development Series, the two-time New Zealand V8 Ute Champ is excited to steer a Ute again.

“I love the Utes, it’s where it all started for me and it will be great to be behind the wheel again. It’s unfortunate for Tony that he can’t drive this weekend but hopefully he’ll be back for the next round. I’m looking forward to hitting the track and mixing it with the guys,” said Pither.

The drivers will hit the track for Practice tomorrow at 8:40am (local time).

12/06/2013
Related Content
V8 Utes: Fast Facts, Hidden Valley  ›
11/06/2013
2013 SKYCITY Triple Crown  ›
Stay In The Know
Sign up to the Virgin Australia Supercars Championship Newsletter
We use cookies to ensure that we give you the best experience on our website. If you continue to use this site we will assume that you are happy with it.Ok