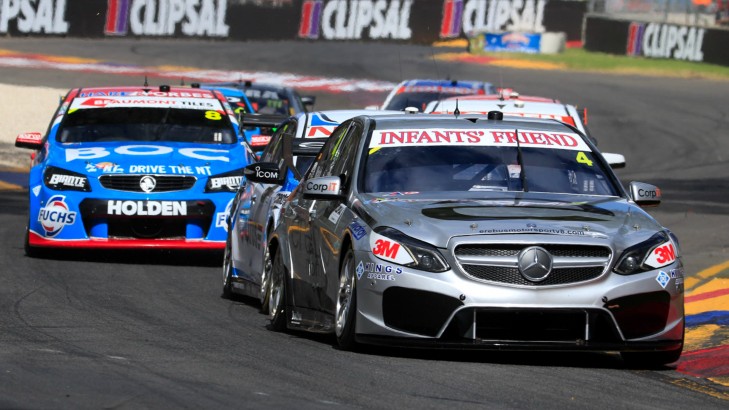 Ash Walsh proved a worthy new recruit for Erebus Motorsport yesterday, steering his V8 Supercar into the top 10 in his second race as a full-time Championship driver.

The Clipsal 500 is considered one of the most treacherous tracks on the calendar, with plenty of danger zones and trouble when racing in the pack.

After qualifying 15th, Walsh fought up to eigth in the 125km Race Two - and the 27-year old seemed to have even surprised himself with the effort.

"I couldn't believe it, to be honest!" a happy Walsh told v8supercars.com.au.

"I was rolling around at the start and wasn't really sure where I was and I just tried to push on as hard as I could.

"We made some changes to the car and it really came alive -it was seven-tenths quicker than the firstrace with the changes that we made."

Walsh came home ahead of Lee Holdsworth, Mark Winterbottom, Todd Kelly and Shane van Gisbergen, and jumped a position after Scott McLaughlin was handed a 10-second time penalty post-race after a controversial call by his GRM team.

"It was really weird actually!" Walsh said of racing the guys who were often front-runners.

"I spent so many years watching these guys race and now to be in the thick of the action, it was so strange.

"A few close calls in that race, I had a touch with Wood, which is no good but it all happened and I definitely feel like I earned that one."

Walsh was under investigation for the incident, which hadn't been resovled by the stewards when the penalties summary was released last night.

Erebus team boss Ryan Maddison was also pleased with Walsh's debut, but was not putting any pressure on his rookie charge for today's longer and more grueling 250km race around the Adelaide street track.

"He has just set that benchmark with a mature drive ...he didn't seem to get too rattled with what was going on around him in both races," Maddison said.

"I don't expect the same result because a lot of things have to happen to move forward at a track like this.

"But if he can continue to drive as maturely as he is then I will be very satisfied coming away from Clipsal."

Likewise, Walsh has not altered his expectations for today's race, taking a conservative approach to what will be a challenge.

"I don't want to put the expectation up there because there were a lot of crashes in that race," he said.

Walsh is working with engineer Wes McDougall,also the team's technical director, and believes they are already speaking the same language.

"There are many ways to skin the cat and there's many ways to change things to get the same result so it is just working out between the two of us what the car likes and what I like moving forward," Walsh said.

McLaughlin: 'We're out to win on Sunday'