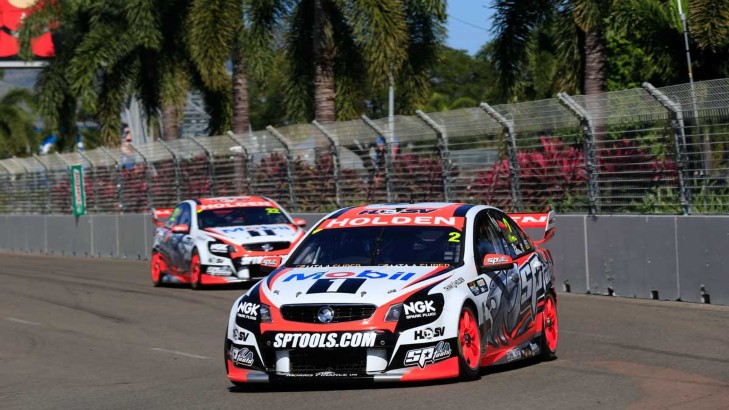 ARMOR ALL Qualifying has unfolded at the Castrol Townsville 500 -Driven by TAFE Queensland, setting the starting grids for both this afternoon's 125km, 44-lap races.

Holden Racing Team scored a one-two finish in the first session, James Courtney and Garth Tander to start from the front row.

Courtney himself admitted he was shocked by the result, a 1min12.8026, which was a strong 0.2sec quicker than his teammate - but in the order he'd hoped for!

"We thought we had a good car, but it really came alive on those tyres."

Lockwood Racing's Fabian Coulthard topped the second session with 1min13.017 -but it was Nick Percat who starred, scoring his first front row qualifying with Walkinshaw Racing, missing pole by just 0.050sec. Will Davison also featured in that session, to start from third on the grid after winning here in an FPR Falcon last year.

Meanwhile, Red Bull's Craig Lowndes and Jamie Whincup recorded fifth and 10th in the first run, and sixth and tenth in the second.

Championship leader Mark Winterbottom will have some ground to make up, to start from 17 and 19 for the sessions.

05/07/2014
Stay In The Know
Sign up to the Virgin Australia Supercars Championship Newsletter
We use cookies to ensure that we give you the best experience on our website. If you continue to use this site we will assume that you are happy with it.Ok