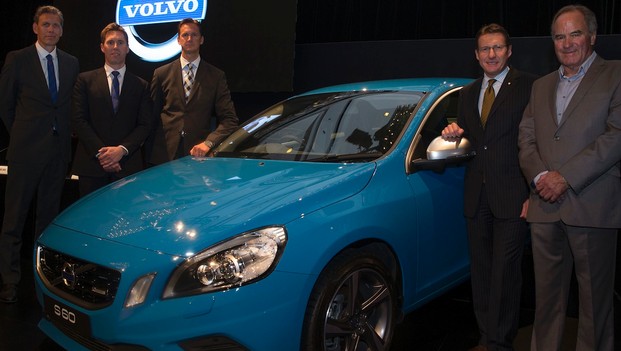 Garry Rogers has revealed he had to overcome initialopposition from within his team to taking on the development of Volvo’sfactory-backed attack on the V8 Supercars Championship in 2014.

Rogers said the concerns were expressed early in the 2013 seasonaround the time rookie Scott McLaughlin had won two races in quick successionand his teammate Alex Premat was showing top 10 pace in the newly-developedCar of the Future Holden Commodore VFs.

“Our cars were going gang busters, Scotty had just won atthe grand prix, and my guys were saying ‘what have we got to gain by doingthis, we will have to start over again’,” Rogers told v8supercars.com.au at Monday’sannouncement of Volvo Polestar Racing.

“But if you are going to be in this business then you haveto do a deal with a manufacturer somehow and I said to them ‘this is what wehave to do’.”

What won his employees over, Rogers says, was meetingPolestar Racing chief Christian Dahl and then starting a technical interactionwith Volvo’s global racing and performance partner.

“My blokes are pretty basic mechanical engineering type guysand they realised Christian and his guys knew what they were talking about.They were sending stuff back and forth because they were trying to work out howto do the body design and how to make the engine fit and so on.”

The plan now is for GRM to build its Car of the Future S60sin its Dandenong workshop while continuing to campaign its current Fujitsu CommodoreVFs for the rest of this 2013 season.

Engineer Scott Campbell, who performed the computer aideddesign work on the VE Commodore and Nissan Altima V8 Supercar, is currentlyperforming the same task under contract for GRM mating the S60’s panels to theCotF chassis.

Rogers said he first approached Volvo Car Australia about V8Supercars racing in August 2012 and heard back from VCA managing director MattBraid within a month.

“It really started to hot up when Christian came tovisit the team in February and had a look around. By then the chat had intensified,”Rogers recalled.

He said the use of Volvo’s V8 engine had been part of thediscussion from the very first negotiations and there had never been anyintention to sue a ‘generic’ engine as some media outlets had been reporting.

“They were adamant when we spoke about it,” Rogers said. “Isuggested we build a car and test it with the (Chevrolet) engine we have gotbut that was never going to happen.”

The negotiations with Volvo reached their peak and agreementwas reached during the Austin 400 in Texas. But final paperwork was only signedoff Monday morning before the announcement was made.

While all chassis preparation will physically be performedat GRM’s Dandenong shop, development of the 4.4-litre V8 Volvo engine will beconducted by Polestar. Bearing in mind the difficulties experienced by NissanMotorsport and Erebus this year, Rogers acknowledges competitive engineperformance will be a huge challenge for the program.

“It’s a 4.4-litre engine that is going to have to be a5.0-litre engine and I don’t think anyone hides form the fact that it is oldtechnology,” said Rogers. “But the rules in the engine rebuild process allowthat to become modern technology. At this stage it is all hypothetical until wecan get one built.”

Alexandre Prémat  ›
15' Wilson Security Racing GRM ›
Stay In The Know
Sign up to the Virgin Australia Supercars Championship Newsletter
We use cookies to ensure that we give you the best experience on our website. If you continue to use this site we will assume that you are happy with it.Ok