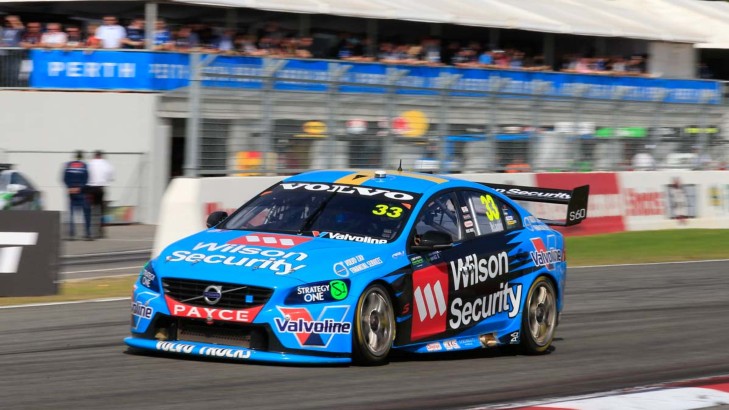 While confident its rash of engine failures has been overcome, Wilson Security Racing GRM must now try and figure out why the Volvo S60 V8 has lost race-winning pace.

The team's 2015 season start has been nightmarish, with McLaughlin suffering two engine failures and team-mate David Wall one.

Wall has also struggled for competitiveness, suffering a third degree burn to the big toe on his right foot at the Clipsal 500, which has impacted his performances ever since and forced him to hand his car over to Chris Pither for the Australian Grand Prix support races.

McLaughlin suffered niggling electrical issues in his new car in Perth last weekend, a faulty fuel sensor forcing his retirement from Race Seven and another sensor issue triggering a misfire that condemned him to an 18th place finish in Race Nine.

Team owner Garry Rogers has crunched the numbers for both the Tyrepower Tasmania SuperSprint and last weekend's UBET Perth SuperSprint and has confirmed the Volvo has given up pace to its rivals compared to 2014, when McLaughlin snared five wins in the car's sensational debut season.

But having established speed has to be found, Rogers also revealed the team is unsure right now where to go hunting for it as it prepares for the Winton SuperSprint in less than two weeks.

"We have to just sit down and go through where we are at," he told v8supercars.com.au. "What we have changed? What we haven't changed, have we done something that we didn't do before?

"But look, do I know exactly what it is? No I don't. I just know we have to do something to get back to where we were.

"We will discuss it, we will have a look at what we think is logical rather than theory and I think perhaps we might just have a little look at what worked as a more practical application versus too experimental."

The pace slump has been particularly puzzling for the team because McLaughlin qualified well at the season-opening Clipsal 500 - although the results don't show it because he suffered engine and alternator issues and was penalised for a jumped start.

He also had decent speed at the Formula 1 Rolex Australian Grand Prix, despite more engine dramas.

"Then we went to Tassie and ... against the main players we consider we have to beat we were slower compared lap-for-lap, equal tyre for equal tyre, no traffic - that type of direct comparison you can make - and we were not fast enough," said Rogers.

"And I have made the same comparisons again (for Perth) and we are definitely slower."

Another factor the team is grappling with in all this - the S60 is not significantly changed from 2014. The summer was spent tidying the car up and resolving niggling issues rather than making any sweeping changes.

"We will go back and look at things we had in the car when we were going well, but we really haven't changed much," Rogers said.

"We might have made a little bit of a shock change or things like that, but we haven't made any radical changes.

While GRM didn't make major changes over the summer, its four rival brands have. The Ford Falcon FG X looks clearly quicker than its predecessor, the VF Commodore has also been re-homologated for aero as has the Nissan Altima. The Erebus Motorsport V8 Mercedes-Benz E63 AMG's engine and chassis upgrades have played a clear role in boosting star driver Will Davison's competitiveness.

But Rogers rejects the theory the Volvo should have had more changes for 2015, although he did acknowledge rivals were lifting their performance.

"Let's not muck around, the Ford is a bloody good car. Its aero is good and the car is working well. It's also being driven well at the moment too, so you have to take that into account.

"Obviously (Chaz) Mostert is putting (Mark) Winterbottom under the pump and when you put people under the pump they respond. He's obviously had some real pressure there.

"And I think the Walkinshaw business is being run in a more professional manner. They are going a lot better."

Meanwhile, Rogers confirmed that modifications to the oil feed system of the B8444S engine made by Polestar in Sweden and a revised starting procedure had both been implemented for the Perth event and appeared to pay off as there were no engine failures.

"We seem to be over our engine issues," he said. "We seem to have got that under control but we still have a few meetings to go to make sure of that."

More good news for the team is that Wall has declared himself close to 100 per cent fit with only a small amount of healing required for his skin graft. He made it through Barbagallo without serious issues and is not expecting any problems at Winton.

2015-NP300 Navara Winton SuperSprint  ›
Stay In The Know
Sign up to the Repco Supercars Championship Newsletter
We use cookies to ensure that we give you the best experience on our website. If you continue to use this site we will assume that you are happy with it.Ok