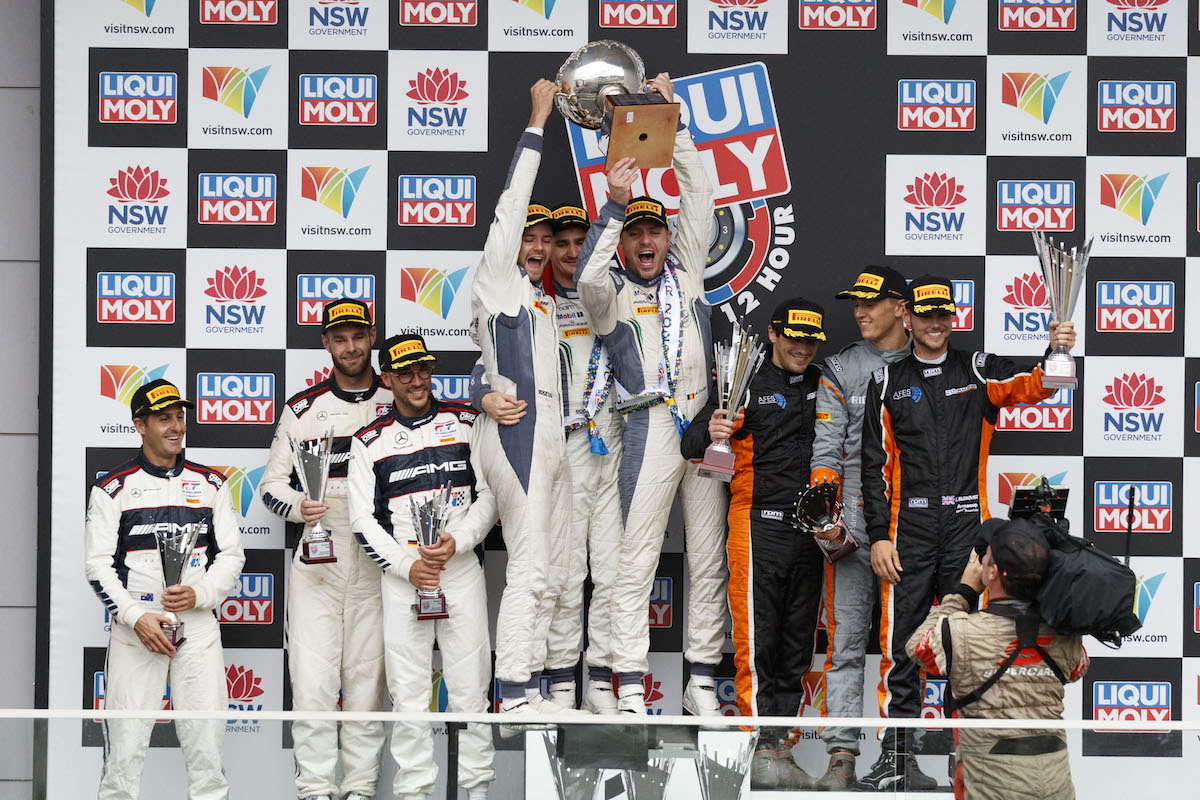 Shane van Gisbergen deployed the hazard lights on his Triple Eight Mercedes as part of efforts to hold off Matt Campbell for a podium finish in the Liqui-Moly Bathurst 12 Hour.

The Triple Eight-run Mercedes van Gisbergen shared with Jamie Whincup and Maxi Götz was elevated to third after a post-race time penalty to the GruppeM entry for a pitstop infringement.

Van Gisbergen had spent the closing laps fending off polesitter Campbell, who had closed rapidly in the #911 Absolute Racing Porsche but could not find a way by.

“It was a cool finish, [I] had a good race with Matty,” said van Gisbergen, who was on the other side of a late podium fight 12 months ago.

“He was trying to put me off, flashing the lights and s***, so I put my hazard lights on to put him off!

“It was a bit of fun and nice to get a podium.

“It was awesome to have the support of AMG this weekend, I think it stepped up our team.

“We’re still learning about this car and GT racing and Jamie and I as well are still adapting to this car, especially at this track.” 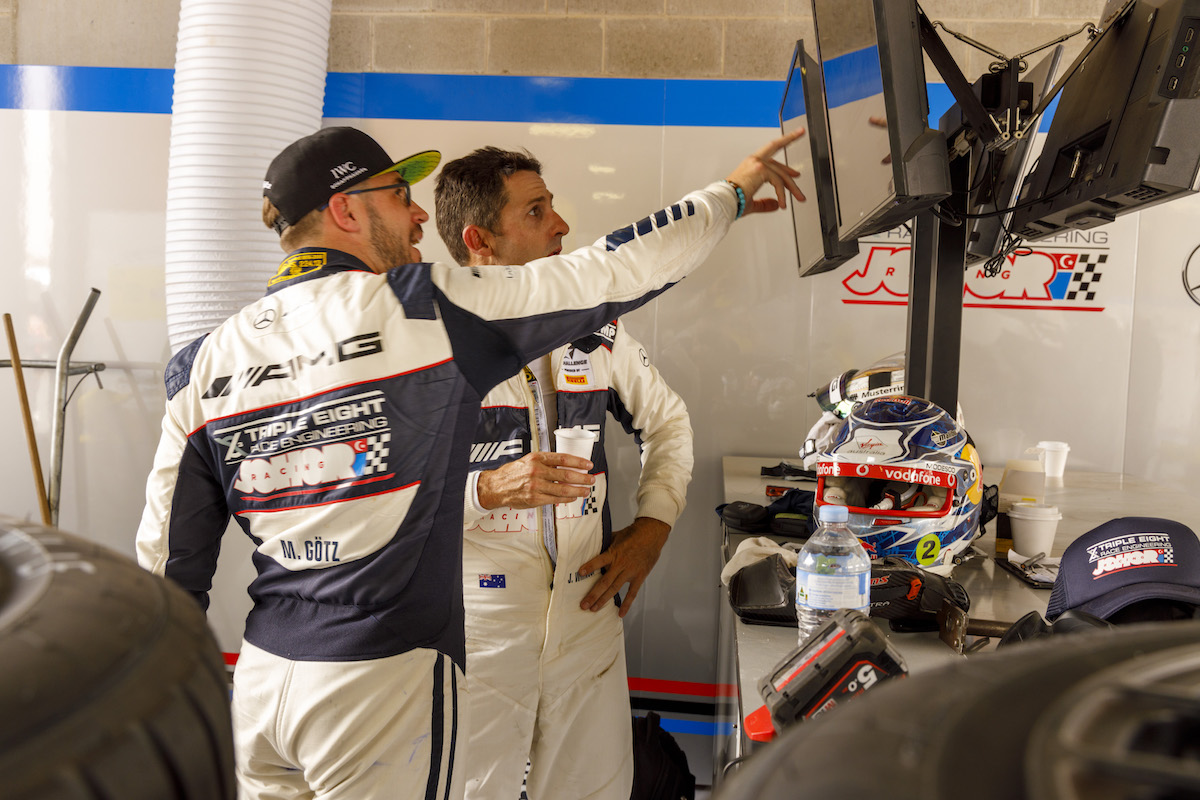 Götz and Whincup watch on

Part of the AMG support for Triple Eight’s effort this year included factory driver Götz, who was brought into the team at the expense of Craig Lowndes.

The German’s final stint in the car before handing over to van Gisbergen came in challenging circumstances, as he lost ground against cars with newer tyres.

“I was fighting with an unloaded weapon I would say. We had used tyres and the others around me had new ones,” said Götz.

“I was fighting a lot, but I think I managed well. I was really suffering on braking and turning and traction really, so this was one of the hardest stints of my life.

“I was a bit disappointed because I lost some places but I gave it everything, I was flat out all the laps, it was an intense stint.” 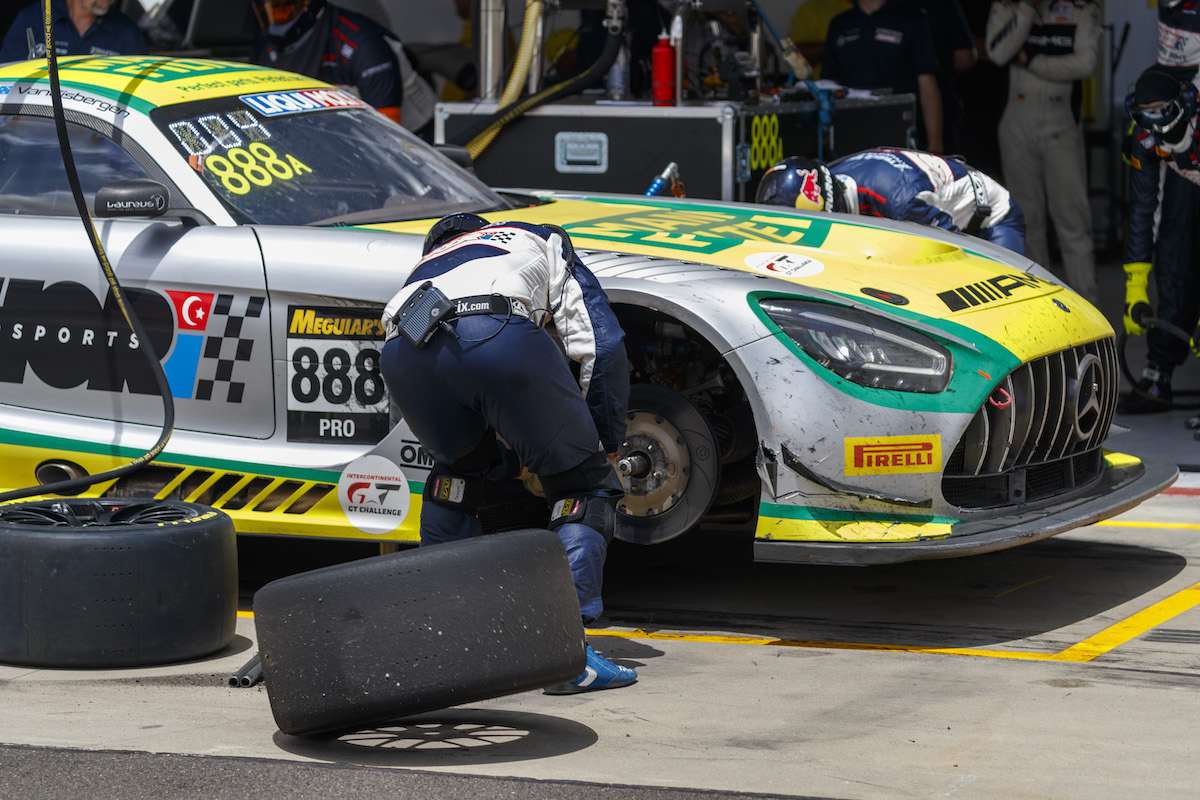 Team manager Mark Dutton said the decision to leave Götz on old rubber was a gamble taken to try and gain ground after losing out with Safety Cars earlier in the race.

“Some people the Safety Cars worked for them, but we had a couple that 100 percent didn’t, we just lost bulk time. Then we were trying to play catch-up,” he said.

“The car was generally pretty quick, but we need to analyse the pace, because overall we weren’t happy with the pace and that shows in the result.”

Van Gisbergen led the race into the final hour as the team held out on making its final stop, hoping that rain would force the whole field to pit again for wets.

Ultimately, the long-predicted rain didn’t arrive until moments after the chequered flag.

“If you watched the radar it engulfed all the way around the track and just wouldn’t fall until the last half, one third of the [final] lap,” said Dutton.

“We were hoping for that to keep it a bit lively.”