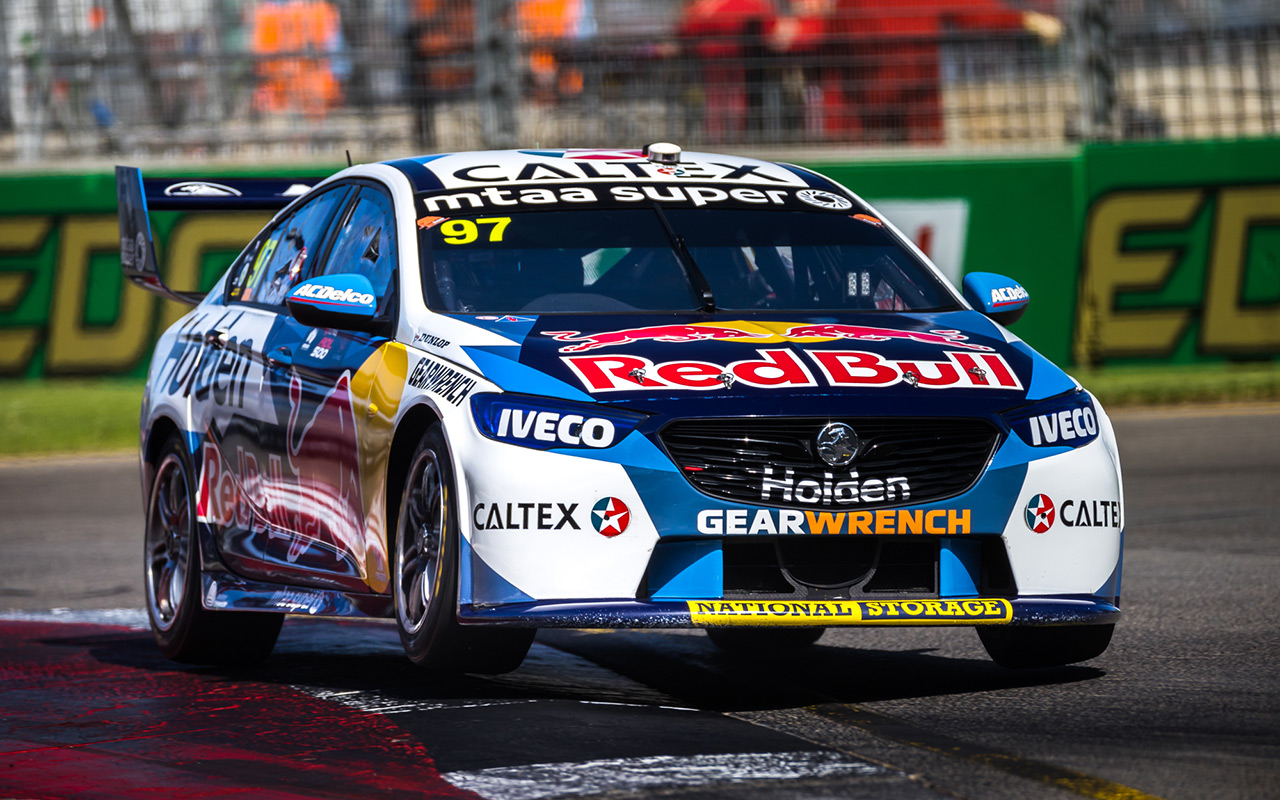 The Red Bull Holden Racing Team has charged to the front at the Superloop Adelaide 500, taking a one-three in Practice 2.

Shane van Gisbergen and Jamie Whincup dominated much of the session, with the former finishing on top having set his 1:19.8079 in the final five minutes.

Whincup had led at the halfway point but did not improve from there, allowing Will Davison to jump him for second late, just 0.0895s off van Gisbergen’s benchmark.

It continues strong pace shown by the 23Red entry, having topped the BP Ultimate SuperTest and been third in Thursday practice.

Davison bounced back having earlier beached his Mustang at Turn 11 courtesy of a lock-up, triggering the first of two red flags for the session.

“It was one of those sessions where we were on a used tyre, second run, was on a 20.1s comfortably and just pushing the limits, made an error, went into the gravel,” Davison explained.

Shell V-Power Racing teammates Scott McLaughlin and Fabian Coulthard continued to fly under the radar in seventh and eighth, with Anton De Pasquale and Mark Winterbottom rounding out the top 10.

Those 10 will proceed straight to the second phase of ARMOR ALL Qualifying tomorrow, which will run to a knockout format.

It was otherwise a horror session for Team 18, as both cars found the wall.

The same could not be said for the sister car of Scott Pye, having crunched into the wall at Turn 7 after an apparent mechanical failure, bringing out red flags with seven minutes remaining.

"Frosty got away with it, just, so that was alright, and obviously Scotty, something broke by the looks of things on the kerb coming in,” said Team 18 boss Charlie Schwerkolt.

“Either a steering arm or the damper or something is broken and obviously he had no steering and into the wall. Not a good start.”

Pye added: “I think maybe we broke a shock or something, I'm not entirely sure.

“I just went into the apex and the front-right broke and it turned hard left and I missed that tyre wall and hit the concrete wall pretty hard, so hopefully the car is not too bad.”

Both Team 18 cars had also earlier placed under investigation for a possible breach of pitlane procedure.

The session was ultimately extended, with cars returning for a final nine-minute run.

Practice 3 will get underway at 6pm local time, forming the final chance to prepare for the season’s first ARMOR ALL Qualifying session tomorrow morning.