Shane van Gisbergen admits he expected to lose pole for 2018’s opening Supercars race at the Adelaide 500, when under investigation for a track-limits breach.

Van Gisbergen took his Red Bull Holden Racing Team Commodore to the fastest time in the ARMOR ALL Top 10 Shootout by nearly half-a-second on Saturday morning.

Stewards quickly indicated they would investigate van Gisbergen exceeding track limits on the exit of Turn 7 during his lap, running outside a yellow line painted on the road.

He ultimately avoided penalty and kept pole, with stewards issuing a brief statement confirming it investigated suspected track limit breaches "by all cars competing in the session", determining that "none of these matters warranted referral to the stewards".

“First thing's first, I was four wheels off the track,” said van Gisbergen after the afternoon's race. “That was clear.

“The line was in a different place to last year. I went off the track.

“Obviously gained no advantage, it was down the straight, and fair enough everyone protested, but they didn’t check to see if their cars were on the track.

“When they found that out, the teams that protested withdrew pretty quick.

“It’s fine. It’s just the rules are different every year and that was obviously very clear and well highlighted, so everyone picked up on it.

“I was expecting to get thrown out but I think it’s a good thing that they didn’t throw eight of us or whatever it was out, that would have been pretty average.

“If they did DQ everyone, I would have been second.”

With van Gisbergen having dropped to third off the line, Triple Eight avoided the temptation of a short-fill at the first stop as deployed by their rivals’ crews.

That set the 2016 champion up for a shorter second stop, and van Gisbergen duly emerged with a lead he never relinquished. 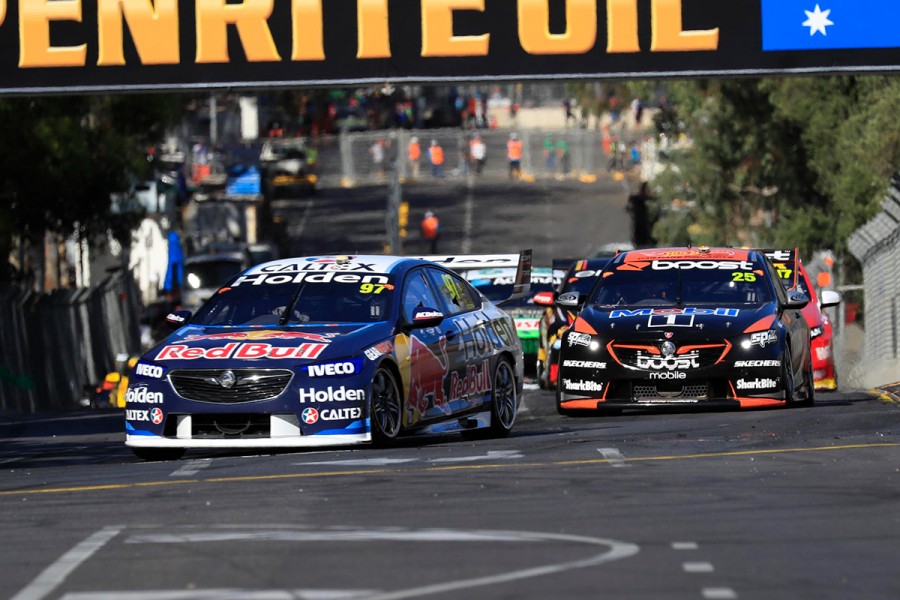 A string of three Safety Car periods between laps 52 and 62 threatened to interrupt van Gisbergen’s flow, but he knew the key to keeping Courtney at bay.

“The only worry was James at the start,” he said of the final restart.

“I knew he was super-quick through Turn 8 and after the [Tim] Blanchard incident there was so much rubbish on the road at 8.

“I knew I’d have to nail the first sector and then I could afford to cruise through there.

“I got a really good first sector and came through cautious and then saw him full-sideways, up against the wall and I was quite happy I got through there good because he would’ve attacked me into 9.

“That was the only worry with the restarts, otherwise I felt like my car came on a bit better than the others.”