McLaughlin was a mere 0.0713s off van Gisbergen's 1:10.6430s, but had to settle for the second row with Shell V-Power Racing team-mate Fabian Coulthard.

A 20-minute ARMOR ALL Qualifying session was the day's first running, following a pair of Coates Hire Newcastle 500 practice sessions on Friday.

Triple Eight was on a different strategy, doing a single installation lap at the start rather than getting straight into flyers.

When they did get going, van Gisbergen jumped into second despite locking up into Turn 11 and Whincup fourth in a pack split by a scant 0.0081s.

McLaughlin and then van Gisbergen moved to the top during the second runs mid-session, the benchmark moving to the latter's 1:10.6430s.

Neither title rival improved on their final runs, but Whincup found time to slot into second to split them.

It was a sixth pole of the year for van Gisbergen, and a first since the Sunday Townsville race in July.

"There’s definitely a lot of pressure, but the car was awesome, the guys did a great job," van Gisbergen said.

"It’s step one, the race is where it counts, but it’s the perfect spot so I’m stoked."

Behind Whincup, McLaughlin and Coulthard wound up third and fourth. 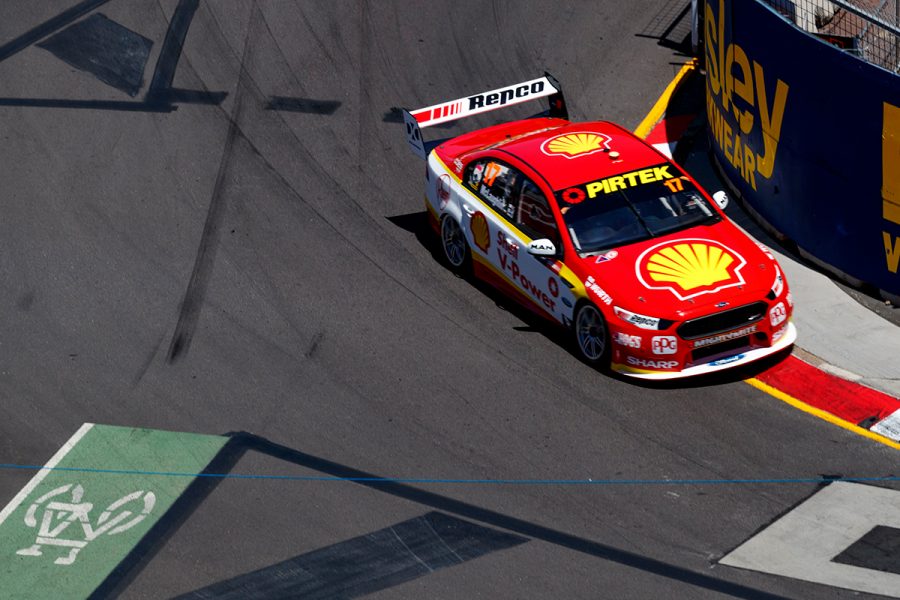 "That was tough. I hit the wall a number of times just trying to get the most out of it," McLaughlin, who set the pace on Friday, said.

"It was a lot harder to drive today than yesterday, I think we made some changes that weren’t right.

"Yesterday we’d hit [the inside kerb at Turn 1] and it’d be just like a little speed hump, but today it flies a little bit too long and I end up in the wall.

"After the last one I think I’d bent the car a little bit.

"But we’re there, we’re not far away, it just wasn’t quite enough for pole."

Behind the Red Bull Holdens and Shell Fords, Lee Holdsworth was the best of the rest for Preston Hire Racing.

In his last weekend with the team, Holdsworth took his highest grid position of the season with fifth.

"I came here to make a statement and we’ve rolled out with a pretty decent car, very similar to our car that we’ve been progressing ever since Bathurst," he said.

"Brighty (co-driver Jason Bright) helped us get a bit of a direction there, where we were both pushing for the same thing, and we’ve got it in a window that we’re building on.

"Unfortunately it’s way too late in the year to save me in this place, but I’m looking forward to bigger and better things anyway."

Anton De Pasquale grabbed sixth, the rookie shading Penrite Erebus team-mate David Reynolds, who was at the foot of the order at the halfway mark after locking up at Turn 11.

“The track is kind of weird," said Reynolds. "It gets slower as the session goes on, I think, so you’ve got to have the best run early on and I stuffed it, so I’m a bit depressed."

James Courtney, the retiring Craig Lowndes and Nick Percat rounded out the top 10, ahead of the best of the Nissans, Rick Kelly in 11th.

Another outgoing driver, Tim Blanchard was 13th while Mark Winterbottom will start his penultimate race with Tickford Racing in 22nd.

Cameron Waters qualified 16th, as the best Tickford driver, but falls to 19th with a three-place grid penalty for impeding Michael Caruso at Turn 11.

Caruso missed the final runs with suspension problems and will be 20th when Saturday's 95-lap race starts at 3:45pm AEDT.