Van Gisbergen ‘learnt who his friends are’

Shane van Gisbergen says he could tell who his friends on the Supercars grid were during a 19th-to-10th recovery drive in the opening leg of the Vodafone Gold Coast 600.

The Red Bull Holden Racing Team driver lost the championship lead to Scott McLaughlin, going from 19 points ahead to 14 behind with McLaughlin finishing fifth.

It could have been far worse, though, van Gisbergen's co-driver Earl Bamber picking up a drive-through penalty for an unsafe release during the first round of pitstops under Safety Car conditions.

Bamber was already delayed double-stacking behind team-mate Paul Dumbrell, who picked up an identical penalty for his merge into the fast lane having stalled.

After serving the sanctions, they were a Dumbrell-led 21st and 22nd and well behind the pack, the earlier first pitstop meaning co-drivers did the bulk of the race.

Van Gisbergen finally joined the fray on lap 64, and cut his way from 19th to 10th on the run home to salvage valuable points.

"I drove my arse off then," van Gisbergen said.

"But that's the best thing about this team, we did make a mistake but the way we rebounded, [with] strategy and then the pitwork was awesome.

"Earl did fantastic in clean air and we almost got the drive-through back with him, 10th after that was pretty good.

"You learn who your friends are; I've got some nice friends out there, so I'll thank them later for letting me go and then a few I'll pay back later on."

Bamber moved from ninth to seventh during his first stint, dropped to 11th before the penalty and said he then "pushed like an animal" during the balance of his laps following Dumbrell.

Van Gisbergen set the pace on Friday and then in regular ARMOR ALL Qualifying on Saturday before incurring a kerb strike in the Top 10 Shootout that left the pair on the grid.

"The car is amazing, we just need to tidy up the little areas, no mistakes in the Shootout if we make it and have a good day," van Gisbergen added.

"Days like that, when you minimise the points loss, that is where you win it."

Dumbrell moved into the lead on lap two with a pass on Alex Premat, but his pitlane stall triggered the sequence that cost both factory Holdens.

Whincup let van Gisbergen past with 17 laps remaining and crossed the line 14th, admitting "we just made too many errors".

"I stalled the car in pitlane exiting the box, which is my fault," Dumbrell said.

"Then at the same time, there was a mix-up with the radio where I was told to go, and I did but I then had contact with another car.

"Anyway, the reason we were there in the first place is mine, from stalling, so we’ve got to make sure we do a good job tomorrow.

"I hit the other car, it’s black and white, you can’t go across like that.

"If I knew the car was there I wouldn’t have come across but hey, that’s the tough part of this sport." 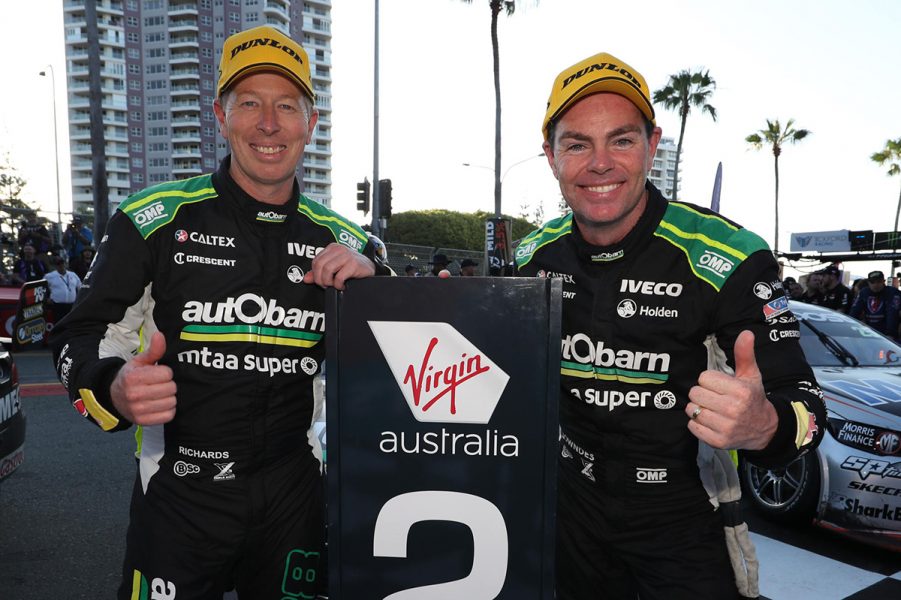 From 21st after a grid penalty, Bathurst winners Craig Lowndes and Steven Richards at least ensured Triple Eight was represented on the podium.

The pair finished second, Lowndes the only full-time driver to start and cutting his way to eighth by the time the first pitstops were made under Safety Car conditions on lap 23.

That left co-drivers elsewhere in pitlane short of their minimum-lap requirement, and meant Richards completed his stint against them rather than full-timers.

An aggressive fuel fill then moved the pair from fifth to third at the final stops, Lowndes finally passing James Courtney with five laps to go.

"Watching Craig in the first stint was a bit inspiring for me, it put a bit of pressure on to do a good job and we popped out in a good position," Richards said.

"The driver change was pretty tight because we had to do it in the fuel time, but it was pretty good, we didn't lose any track position from that."

Lowndes and Richards now hold an 87-point lead over McLaughlin/Premat in the PIRTEK Enduro Cup ahead of Sunday's final leg.