Shane van Gisbergen was "shit-scared” he would hit the championship trophy during his wild Adelaide celebrations.

Van Gisbergen stuttered to seventh in the VALO Adelaide 500 finale on Sunday.

In scenes reminiscent of his 2016 title win in Sydney, van Gisbergen parked his car on the pit wall.

This time, he planted his race boot on the throttle as he fetched the trophy and played up the crowd.

“It wasn’t too planned — I like to wing it,” said van Gisbergen, who was determined to outdo Russell Ingall's 2005 title-winning burnout.

“We talked about what I was allowed to do, and they told me to do it somewhere around the trophy. 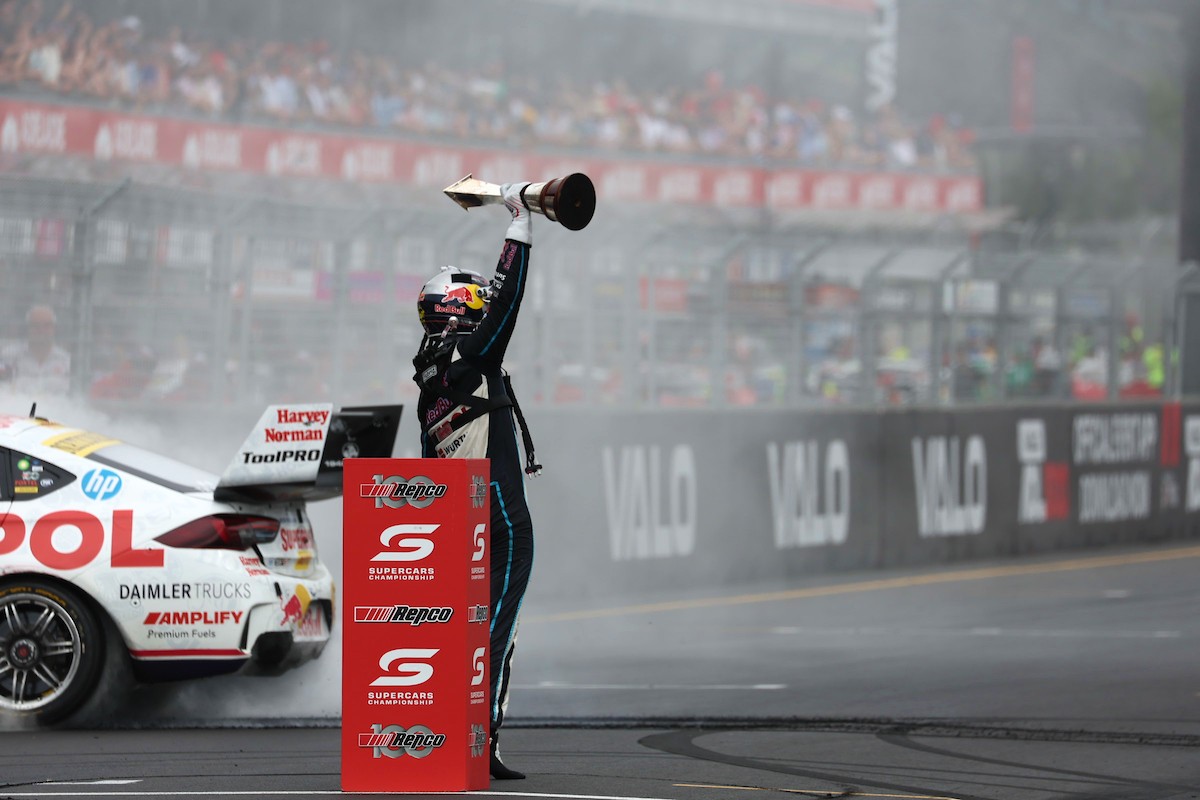 “I was shit-scared of hitting the thing, I left a lot of room. I got out and it was still smoking — it was awesome.

"I wanted to come up with something to beat Ingall's burnout... he's the all-time skid champ."

Van Gisbergen had a dramatic weekend, from crashing on Saturday to speeding in pit lane on Sunday.

He was penalised for a Safety Car infringement late in Sunday’s race, dropping him out of contention.

It killed any chance of completing an all-Holden podium in the brand’s last race.

“When I got into third, I was pumped.

“I’m pretty gutted and baffled they gave us a penalty so much later.

“I’m so glad that a Holden won too, and for Broc to get his first win and the team to go out on top… ripper.

“So glad to be back here in Adelaide and see the stands full.”

Van Gisbergen clinched the title on the Gold Coast in October, and was all-out attack in Adelaide.

However, he failed to win a race at a weekend for the first time since Darwin in June.

Along the way, van Gisbergen’s 2022 has been full of highlights, headlined by his Bathurst win and Pukekohe send-off victory.

In 34 races, van Gisbergen won a record 21 times — and he admitted his dominance has given himself cause to reflect.

“It feels amazing… I sort of let it sink in after Gold Coast,” he said.

“I wanted to come here and perform, but it hasn’t worked out.

“What an amazing year we’ve had… I’ve tried to treasure some of moments this year.

“You realise along the way it’s not going to be like this all the time.

“[Pukekohe] was the best weekend I’ve had in racing… amazing how it all fell together.

“Pukekohe was where fell in love with Supercars and wanted to be a Supercar driver.

Of his family coming back to races, he said: “They missed coming last year.

“I’ve just had a great car all year, team’s been awesome.

“Still ready to go, we should put another set of tyres on it and keep skiddin’.