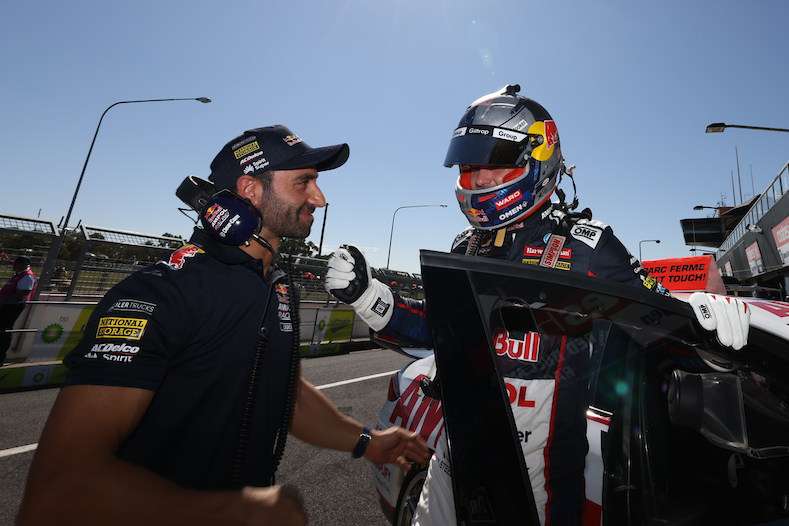 Shane van Gisbergen has again stamped his claim on the Repco Mt Panorama 500 with a brilliant lap to claim provisional pole for Race 2.

All told, the top three were covered by a miserly 0.0985s, setting the scene for another thrilling battle for pole.

Shell V-Power Racing duo Anton De Pasquale and Will Davison were fourth and fifth respectively, and were the only other drivers within reach of van Gisbergen.

Sixth-placed Mark Winterbottom, who finished fourth in Saturday's race, was 0.6495s down on the #97 Triple Eight entry, with James Courtney, Jamie Whincup, David Reynolds and Andre Heimgartner rounding out the top 10.

Such was the speed of the #97 Commodore, Whincup was a whopping 0.7374s down on teammate van Gisbergen.

Six teams will be represented in the one-lap dash, which will commence at 12:10pm AEDT.

Scott Pye, who was caught up in a first-lap melee in Race 1, missed a shootout berth by just 0.0758s.

Bryce Fullwood will line up from 12th for the second time in as many days, ahead of Jack Le Brocq and Nick Percat.

The top 10 will return to the track for the shootout just after midday ahead of the 40-lap Race 2, which will commence at 3:00pm AEDT.