Craig Lowndes says Triple Eight team-mate Shane van Gisbergen apologised for what he considered an “honest mistake” that sent him off track at Phillip Island.

On a quiet Sunday for the factory Holden squad, Lowndes in sixth was being reeled in by van Gisbergen in the closing stages of the 250km race, the 2016 champion having pitted five laps later than any other driver and utilising fresher rubber.

Van Gisbergen tagged the rear of Lowndes’ ZB coming out of Turn 11 with three laps to go, sending it off-track, but waited for Lowndes to rejoin the circuit rather than passing.

He got the job done exiting Siberia the next time around to finish sixth, with Lowndes seventh and Jamie Whincup ninth.

“We knew Shane had better tyres - I think it was 10-lap better, fresher tyres - and we knew he was coming and closing the gap by about half-a-second a lap, so it was one of those things that was inevitable,” Lowndes said of losing the place.

“I had a bit of a slide coming out of MG, around Turn 11 and it was just right where he got some momentum.

“Normally you would be on-throttle then, but of course we couldn’t because of the tyre life.

“It was just one of those things that are unfortunate. I said to Shane before that it was a bugger that we were both behind [Michael] Caruso, because we potentially could have maybe had another spot.

“We’ve had a chat, he apologised because he knew it was a mistake,” Lowndes added.

“But, as I said, normally you would be on-throttle at that point, but because my tyre life was completely different to his it was just an honest mistake.”

Van Gisbergen ultimately crossed the line within one second of Caruso, while Lowndes had a comfortable cushion over Chaz Mostert’s Tickford Falcon behind.

Triple Eight team manager Mark Dutton said of the contact that “there was no malice in it, it wasn't intentional” and that the team would discuss it further when back at its base.

“I asked Shane as soon as he got out of the car, because I couldn't see if he initially hit him or hit him at all from the TV angles,” he said.

“Don't get me wrong, it looked very close, but Shane thought Craig had the wobble by himself and then dropped some speed, and then Shane said he thinks he touched him then.

“I told him to go next door and have a chat about it. We're not going to avoid it or anything like that.

“Shane obviously got straight out of to undo any damage that he did or contributed to it.”

The team-mates also finished in close proximity on Saturday, in third and fourth after Whincup’s penalty. 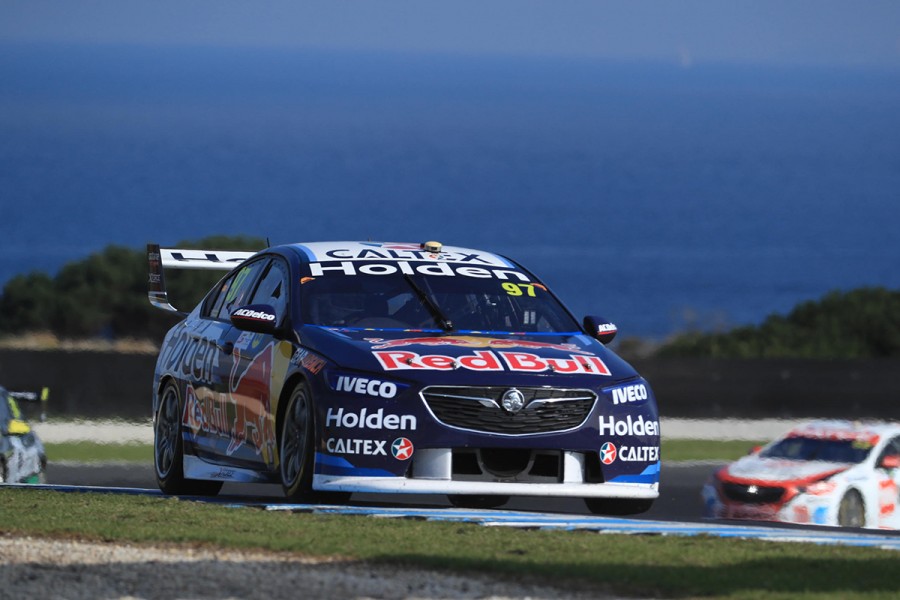 In that race, van Gisbergen - battling power-steering problems - let Lowndes through to chase Rick Kelly but could not pass the Nissan.

Lowndes admitted he was “annoyed” at having to hand the place back on the last lap, as part of what Dutton says was a van Gisbergen-initiated deal.

“Shane, I believe, would have held him at bay,” Dutton said.

“Shane knew he was doing it tough but if he tried hard enough he could match Lowndesy's pace.

“We were seeing that; Lowndes would close up and then Shane would go a little bit faster.

“But he wasn't going to catch and pass Rick for a podium. So being a team player he got on the phone and said 'I'll make it easy for him, I'll move over so he can go for a podium. If he doesn't, we need to swap them back'.

“That wasn't something that we instigated as a team, he did that.

“Craig was more than happy to accept it. It was just unfortunate he didn't catch Rick and pass him. Then he gave it back.

“That wasn't from us, we were just going to sit pretty and hold our breath while they diced.”