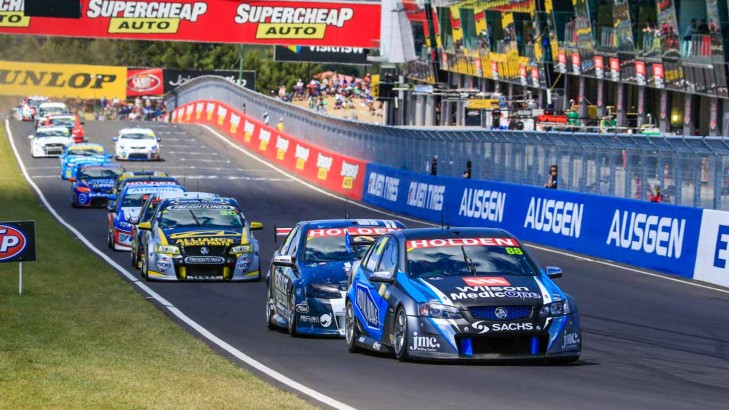 The New Generation V8 Supercar will be eligible for entry in the V8 Supercars Dunlop Series from 2016, meaning the category will be running the same specification car as the Championship teams.

While the change means the V8 Supercars Dunlop Series will be racing identical cars to the Championship, it also has a potential upside for the nations' biggest race, the V8 Supercars Supercheap Auto Bathurst 1000.

V8 Supercars Dunlop Series teams will be eligible to submit wild card entries, which could result in a larger grid for the Great Race.

It is part of V8 Supercars' plan to develop and improve the V8 Supercars Dunlop Series and give the next generation of up-and-comers the exposure they deserve.

In a major windfall for the V8 Supercars Dunlop Series all practice, qualifying and races will be shown live and ad-free on Foxtel, with marquee events the Clipsal 500 Adelaide, Castrol Townsville 400 and Sydney NRMA 500 to showcase the Series on free-to-air Channel Ten.

"Aside from the major announcements we have made over the past 16 months, we have been developing a strategic blueprint for the future," V8 Supercars Chief Executive Officer James Warburton told v8supercars.com.au.

"The unprecedented support the new media partners will give the sport is not limited to V8 Supercars. The V8 Supercars Dunlop Series will ensure that the next generation of stars will be introduced to fans and we can follow their development from the start.

"Our pathway and support category strategy has been a major focus of the new media deal and will be evident shortly."

V8 Supercars Dunlop Series teams were recently presented the 2015 calendar, with the category set to run at the same events next year, with Perth, Winton and Ipswich on the bill.

Formats have also been tweaked, with the three Super Street events in Adelaide, Townsville and Sydney to hold two 30-minute races; and permanent circuits Perth, Ipswich and Winton hosting three 30-minute races (with no reverse grid).

The mini-enduro at the Supercheap Auto Bathurst 1000 will remain after successful running this year, giving teams and drivers a real taste of the 1000, with the opportunity to run co-drivers and complete pit stops.

Earlier this season when V8 Supercars opened discussions for wild card entries for Bathurst and the Pirtek Enduro Cup, there was interest from V8 Supercars Dunlop Series teams - but ultimately running two different models of V8 Supercars in the one race was not endorsed.

McLaughlin up there with the greats

16/11/2014
Stay In The Know
Sign up to the Virgin Australia Supercars Championship Newsletter
We use cookies to ensure that we give you the best experience on our website. If you continue to use this site we will assume that you are happy with it.Ok