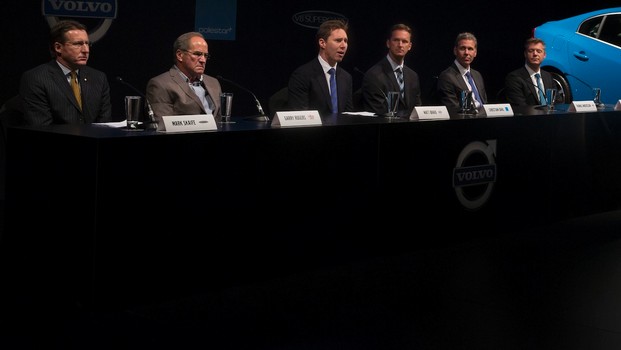 It’s been an exciting day in Brisbane forVolvo Australia and V8 Supercars, with the official announcement of the luxurycar brand’s involvement in the motorsport category.

The brand will in 2014 become the fifthmanufacturer on the V8 Supercars grid, joining 2013 newcomers Nissan and Mercedes-Benz.

At the last event in Darwin, four differentmakes appeared in the top seven cars.

The V8 Supercars Car of the Future strategyhas allowed other manufacturers to become involved in what was formerly aHolden versus Ford battle.

The decision for Volvo to enter theChampionship – inking a “long-term” deal with GRM – was discussedbetween the manufacturer and V8 Supercars from September last year, to fleshout the potential benefits, according to Braid.

He spoke of the strong motorsport heritagethe brand has internationally and in Australia, referencing a 1986 AustralianTouring Car Championship victory, as well as winning the Bathurst 1000 in 1998.

“As the first luxury car brand toofficially enter a factory team in V8 Supercars, we are determined to add tothis heritage, while strengthening the presence of the S60 model and the Volvobrand in Australia,” Braid said.

While figures were not disclosed, Braidsaid the investment from Volvo Australia was significant for the long-term,multi-year deal.

The manufacturer is confident it willachieve results when joining the Championship, though no details ofperformance-specific requirements were revealed.

“It won’t happen overnight, we are wellaware of that, we know we’ve got the goods to be very confident we will achieveresults on the track.

“For us it’s about showcasing the S60. It’sthe most dynamic model in our range and we really want to bring it to the Australianpublic and there’s no better platform to do that than V8 Supercar racing… wewant to bring the S60 to a wider audience than it’s currently receiving at themoment.”

Braid said it was important to show the brandcompeting on track, as well as in the marketplace.

“With the S60 we have a strong programpresenting and marketing the car in Australia. We think this will add to thatand expand the audience.

“I don’t think anybody would look at a V8Supercar and correlate it to a production vehicle… It’s more about their teamcompeting on the race.”

Rogers said securing factory backing wasevery team’s dream and later mentioned jovially he had contacted everymanufacturer out there, even writing a letter to Rolls Royce.

He estimated an S60 would be on track fortesting in late November to December this year.

“It won’t be an easy gig – it never is– but we’re confident we can do the job… all we can do is work is as hardas we can.”

He said at this stage there wouldn’t bechanges within the team – drivers included – though they would beworking with Polestar on development.

“We look forward to seeing you on the gridat the Clipsal 500 next year,” Braid added.