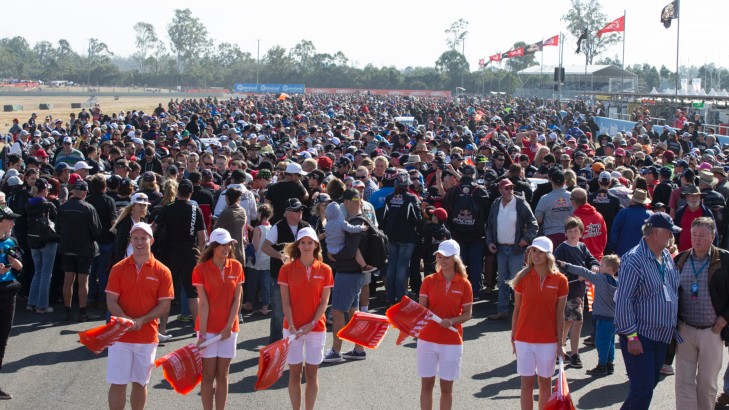 The overwhelmingly successful 'True Colour' track walk will be replicated at the Sydney Motorsport Park 400 where fans can get up close and personal with the stars and their cars.

Thousands of fans flocked to the main straight at Queensland Raceway when all 25 cars were displayed on the track with their drivers for fans to get a close look at the show.

V8 Supercars was elated with the reception from fans and will now continue the practice at events where it is operationally practical.

"We are very focussed on the trackside experience to provide fantastic entertainment and value for money," Damien White, V8 Supercars Director of Sport, Operations and Sanctioned Events, said.

"V8 Supercars is more than a motor race, it's a complete entertainment package."

The 55 minute track walk for fans will take place at 1030 on Sunday of the Sydney Motorsport Park 400. All cars will be presented on track along with the drivers who openly engaged with fans on the QR grid with pictures and autographs.

"It was fantastic, really cool for the fans," said Holden Racing Team's James Courtney who won the Sunday race at Ipswich.

"To have that opportunity to get out there and meet the fans of the sport is a good thing. I'm looking forward to it in Sydney."

With a jam-packed schedule of V8 Supercars and support categories action, first class facilities, plus a host of entertainment the V8 Supercars Sydney Motorsport 400 will be a weekend to remember. Kids 14 and under receive free general admission entry with a paying adult.

The action starts on Friday with the huge line-up of support categories including a new addition to V8 Supercars event in the nimble Radicals, as well as the classy Carrera Cup Porsches. Impressive Australian GT categories and all-time crowd favourites the Touring Car Masters.

The Touring Car Masters, Australian GT and Carrera Cup are all staging their opening races of the weekend making Saturday a full day of adrenalin.

On Sunday it gets really hot with all classes out on track and the V8 Supercars set for a gruelling 200km challenge. In all there are eight races on Sunday from 0800 right through until 5.30pm.

For the first time, the Sydney Motorsport Park 400 will showcase a roof-top bar on top of pit lane. Families and groups can bring the car, the BBQ and 'Park and View'.

All ticket holders get free Shuttle Bus trips to the venue and there is organised free parking on site for those that need it.

Tickets are available now via ticketek.com.au

06/08/2014
Stay In The Know
Sign up to the Repco Supercars Championship Newsletter
We use cookies to ensure that we give you the best experience on our website. If you continue to use this site we will assume that you are happy with it.Ok