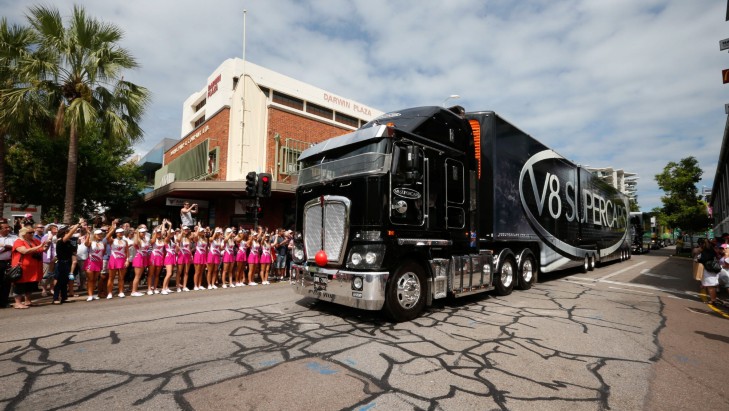 Less than a fortnight separates this weekend's SKYCITY Triple Crown in Darwin and the Castrol Townsville 500 - Driven by TAFE Queensland.

Given the distances between races, most Melbourne teams - and one Queensland team - will send their V8 Supercar transporters straight to North Queensland, rather than heading back to their home workshop.

This means teams have had to be organised with spare parts, in case of disaster at Hidden Valley, particularly with the following event being a street circuit.

According to FPR team manager Chris O'Toole, drivers will go as hard as always on-track - it's the team's responsibility to have all bases covered for what is essentially a double-header.

"It's important to stay out of trouble, but the drivers aren't going to change the way they drive because of that," O'Toole told v8supercars.com.au.

"So we just make sure we're equipped with spares on the truck - or enough spares back (at the workshop) that I can get freighted up in a hurry.

"It won't affect the way we strategise, or the way the drivers perform on track because we will try and win regardless of what we do - so from that point of view, it won't affect it, it just means we've got to have a lot more backup plans in place, should there be significant damage."

Worst-case scenario, the team could freight the spare Falcon to Townsville, and there's a shell that could also be turned around if required.

All four cars' engines will go through both rounds, and for parts like transaxles that need to be changed, the team ensures there are enough fresh parts in the trucks.

"We double up on just about everything, knowing the truck's not coming home. Mostly that's all body work spares - body work and suspension ... and what we can't fit in the truck we've got here on hand and I can get it road freighted ahead to Townsville should I need to...

"We can react pretty quickly if we need to."

After last year's Darwin event, team boss Lucas Dumbrell knows all too well how important it is to be open to change when planning the trip to Townsville.

Dean Fiore's Commodore was involved in the huge Sunday pile-up and rather than head home, LDM went to Triple Eight in Queensland to get the car on the jig and have it ready for the following round.

There was around three weeks between the two events last year, whereas this time, it's just two.

"It always is important to try and minimise damage - but we carry enough spares that it's no different from any other round, really," Dumbrell said.

"If we have a catastrophe then we'll obviously probably make other plans, or maybe come back to Melbourne, but it's just easier (when) the truck is in Townsville we can work on some other stuff at the workshop.

"The truck left with basically, two sets of everything.

"So the (team will) spend a couple of days up there (in Darwin) and then come back to the workshop and finalise the spares."

Along with the teams, the two V8 Supercars Kenworth transporters will also go straight to Townsville.

It is up to the teams to find a "home" for the transporters until the event start, but according to V8 Supercars' transport and logistics coordinator Jason Routley, many will stay with sponsors until the street circuit is opened up.

"They'll prepare their car here in Darwin, go across and be there by the end of the week, probably, and their truck driver will either stay up there in Townsville, or fly back," Routley explained. "Our two trucks will be parking at Kenworth."

According to Nissan Motorsport boss and driver Rick Kelly, it is more cost-effective for the transporter to go back to the workshop and more comfortable for the team to prepare the cars there.

"Rolling around on the ground on a 35-degree day at Darwin is not what we call the ideal scenario to prepare a car," Kelly said.

"We prefer to go back to the workshop where we've got our different departments and a really good environment to prepare the cars... It means a few more kilometres, but it also means we're preparing the car back at our facility and not taking any shortcuts."

All the transporters are now at the Hidden Valley circuit, and can be seen as part of the transporter parade on Wednesday July 3 in Townsville ahead of the upcoming event.

Tickets for the weekend's SKYCITY Triple Crown are still available now, as well as for the Castrol Townsville 500 - Driven by TAFE Queensland, running from July 4-6.

18/06/2014
Related Content
2014 SKYCITY Triple Crown Darwin  ›
2014 Castrol Townsville 500 – Driven by TAFE Queensland  ›
Stay In The Know
Sign up to the Virgin Australia Supercars Championship Newsletter
We use cookies to ensure that we give you the best experience on our website. If you continue to use this site we will assume that you are happy with it.Ok