Triple Eight teammates ‘tripped over each other’ 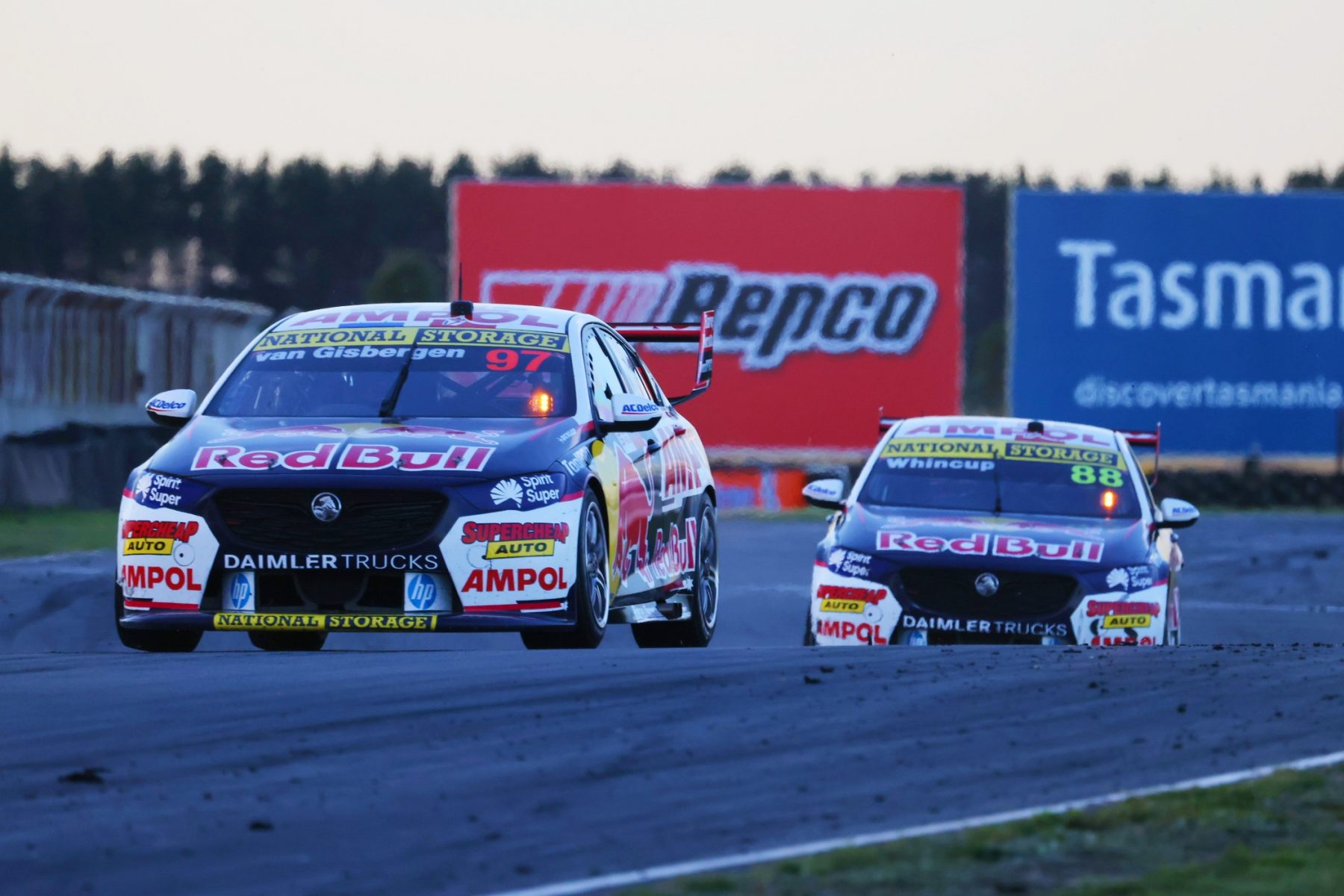 Jamie Whincup has admitted he and Shane van Gisbergen “tripped over each other” as Red Bull Ampol Racing failed to podium in the Tasmania finale.

It marked the first instance since Race 29 at The Bend last September that Triple Eight didn’t have a driver on the podium.

The Race 8 result marked a slump of sorts, with van Gisbergen and Whincup sharing the wins to Sunday’s third and final race.

As Mostert built a gap late in the race, pole-sitter Cameron Waters again battled with tyre life and fell into the clutches of the trailing pack.

Waters was relegated to fourth, but neither van Gisbergen nor Whincup could demote the Ford driver lower.

Van Gisbergen ceded fifth at the death to Whincup, having been allowed through to launch an attack.

According to Whincup, the move backfired.

“In the end there I didn’t think I was going to be able to get the DJR boys, but what we didn’t predict was that Cam was going to bank it back,” Whincup said on the broadcast.

“So I thought I’ll give SVG a crack to get us both through, but when he passed me it was pretty obvious he had less rears than I did.

“We maybe tripped over each other at the end there, but all in all, good points for the round.” 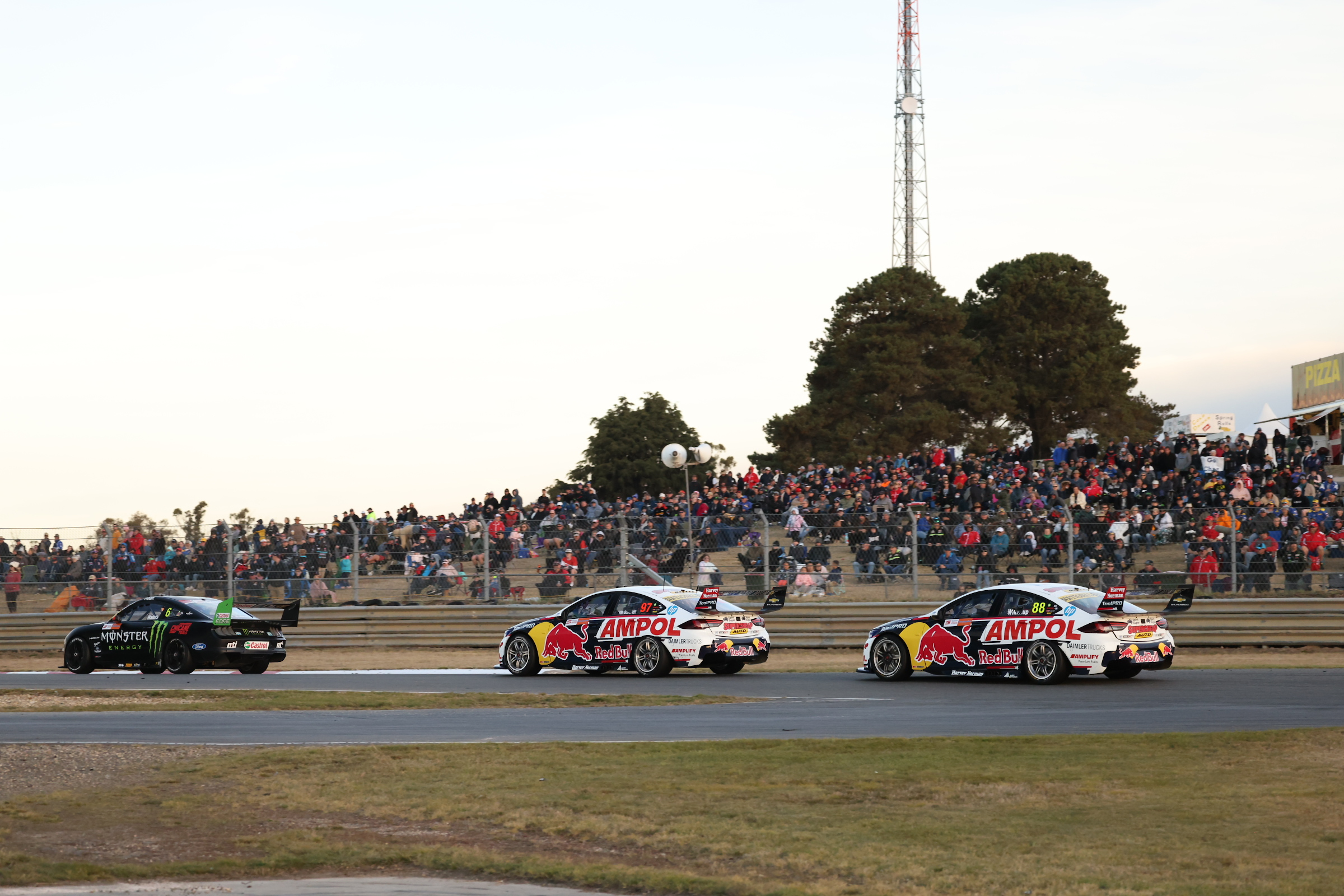 Whincup closed the gap to van Gisbergen to 139 points, with Mostert 165 points in arrears ahead of next month’s OTR SuperSprint.

While his team missed out in Race 8, Whincup was delighted to have claimed his first win earlier in the day, which was his first with new engineer Wes McDougall.

"It’s not a bad thing to not have a good run at the end there... it only makes us hungrier,” he said.

"It was awesome to share my first race win with Wes as well.

"He’s been working bloody hard, and you want any newcomer to the team to feel the success of winning, because once you feel that success, you want more.

"Hopefully, after this weekend he feels that we can continue to win races if we do a good job. It will motivate us to challenge the other side of the garage.

"We don’t necessarily have to beat #97, but we have to give them a really good standard to live up to and motivate them to improve as well. I couldn’t be happier with this weekend.”

Van Gisbergen, who finished behind Whincup in Race 7 to help his team to a one-two, lamented his qualifying performance.

“For the first qualifying session today, we couldn’t quite nail the session compared to yesterday which was a shame, and that made it more difficult for today’s races,” the Kiwi said.

"We used the remainder of our tyres in the first race, which was pretty good because we managed to get a team one-two finish, although it compromised us for the second race today.

"We had no tyres, and we pit early, which meant the other teams covered us, and after that there is not much you can do.

"Even though we didn’t have the greatest tyres, you always want to be up the front challenging for the race win.

"At the end of the day, one of our championship challengers has won the race, so we need to perform a bit better there.”