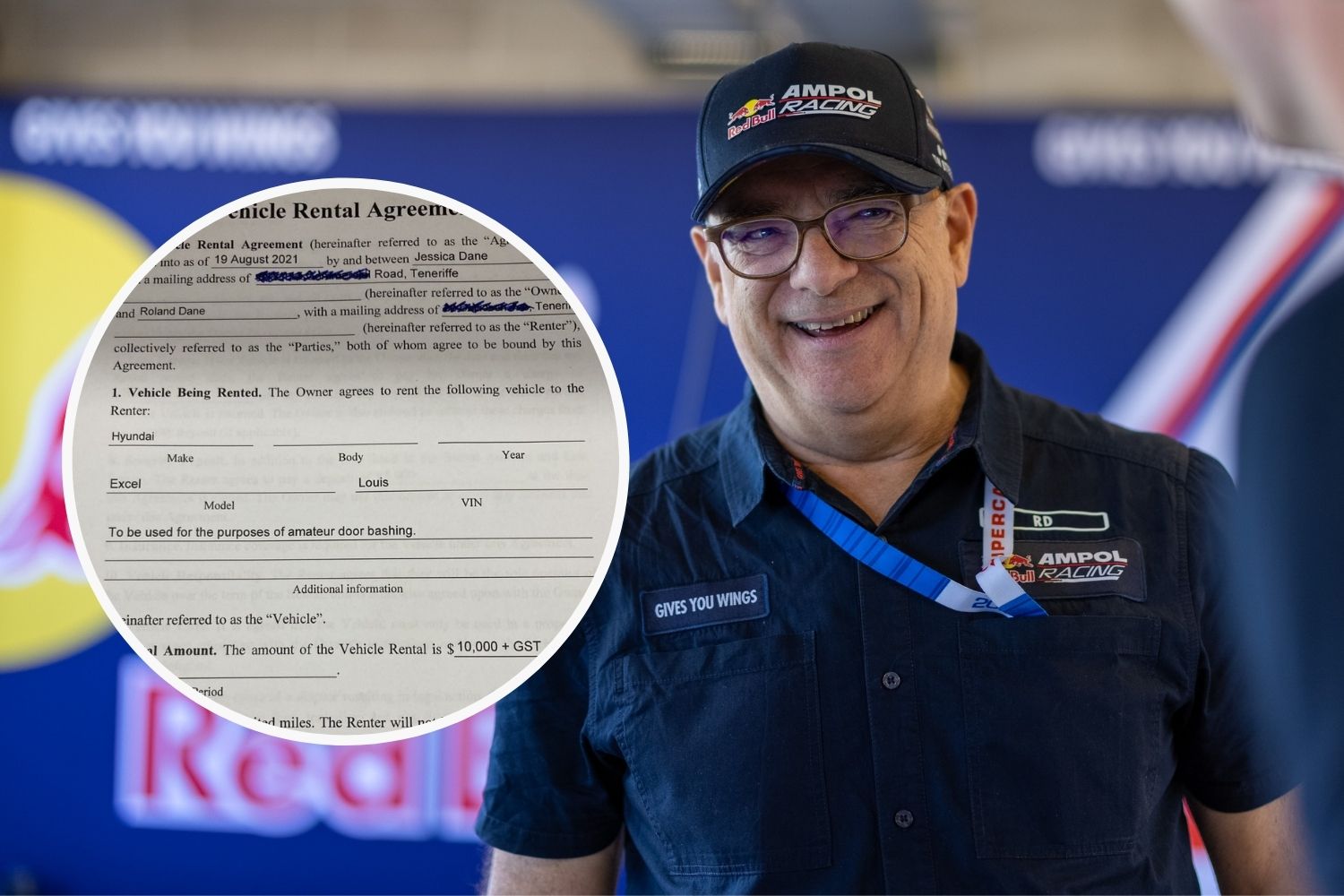 Ahead of the team boss using the Excel for an endurance event at Queensland Raceway this weekend, his youngest daughter has presented him with a contract, complete with a rental amount and deposit terms.

Posting the agreement on his Instagram account on Friday, Dane wrote: “A bit harsh! Have to ask @tunkuabdulrahman for a loan…” 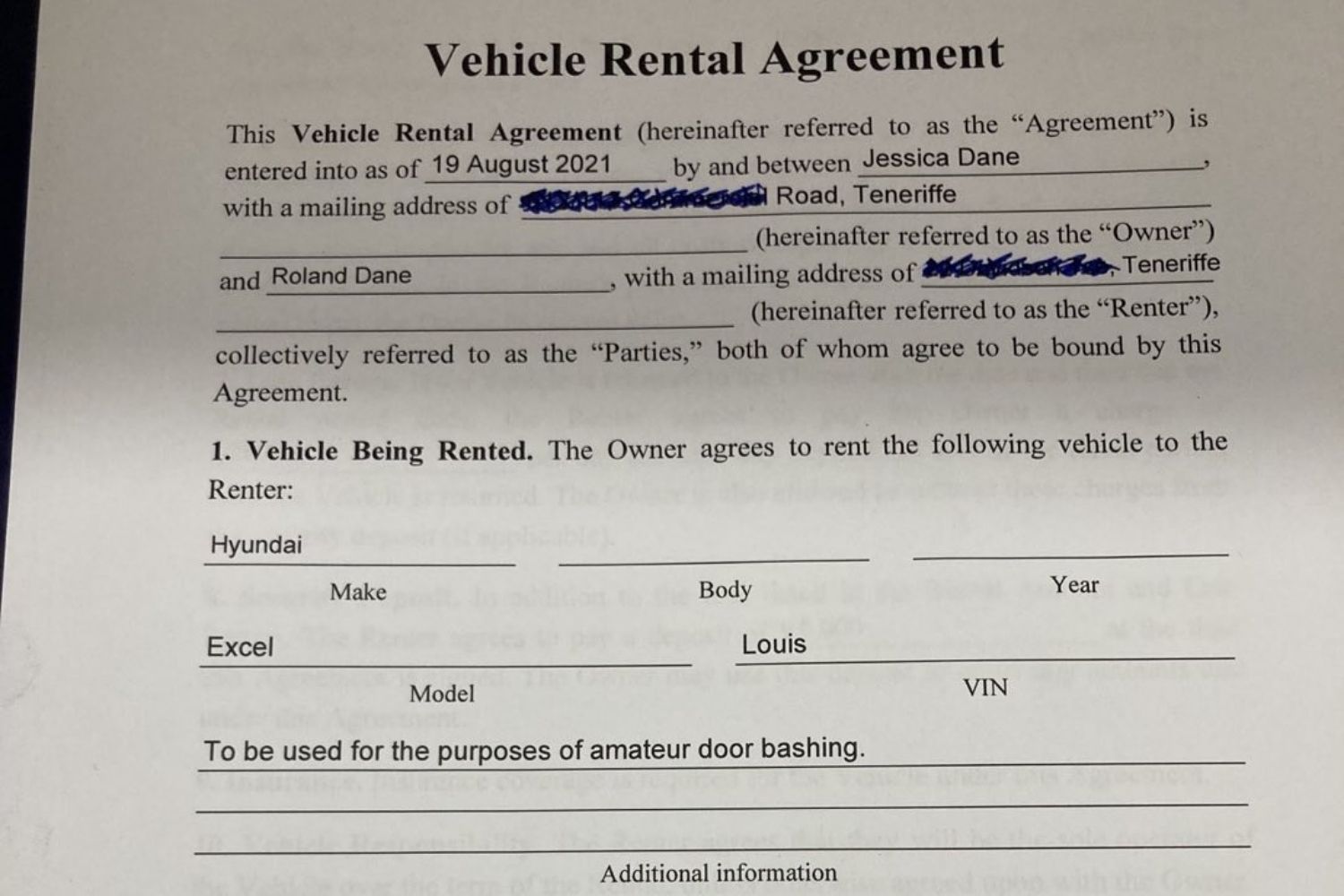 The rental agreement was posted by Roland Dane on Friday

To which Jess Dane replied: "If it doesn't make you go faster or make you money, don't post it."

With a price tag of $10,000 plus GST per day, with a down payment of $5,000, the playful antics could see Roland Dane thousands out of pocket for the mini enduro.

Teaming up with Prince Jefri Ibrahim of Jonor for the Excel grid, the team boss joins a lineup of Supercar drivers taking part in the Queensland Racing Driver Championship across August 21-22.

The rental agreement also states the hire is to be used for “purposes of amateur door bashing” and the Excel’s VIN number is Louis.

First purchasing the car in August last year, Triple Eight Race Engineering co-owner Jess Dane admitted her father has done more racing in it than she has.

“I saw it yesterday for the first time since March, so it’s almost six months, so it’s not my car at all,” Dane told Supercars.com.

“He’s [Roland] been doing a fair bit more driving in the last couple of years than he has done in a while.

“He’s already done a couple of races in my Excel, and Noosa Hill climb in Subaru a few months ago and Townsville last year of course.

“This weekend is another opportunity for him because it’s an enduro and chance to team up with Prince Jefri and have some fun.

“Not that he’s asked for my permission to use the car.” 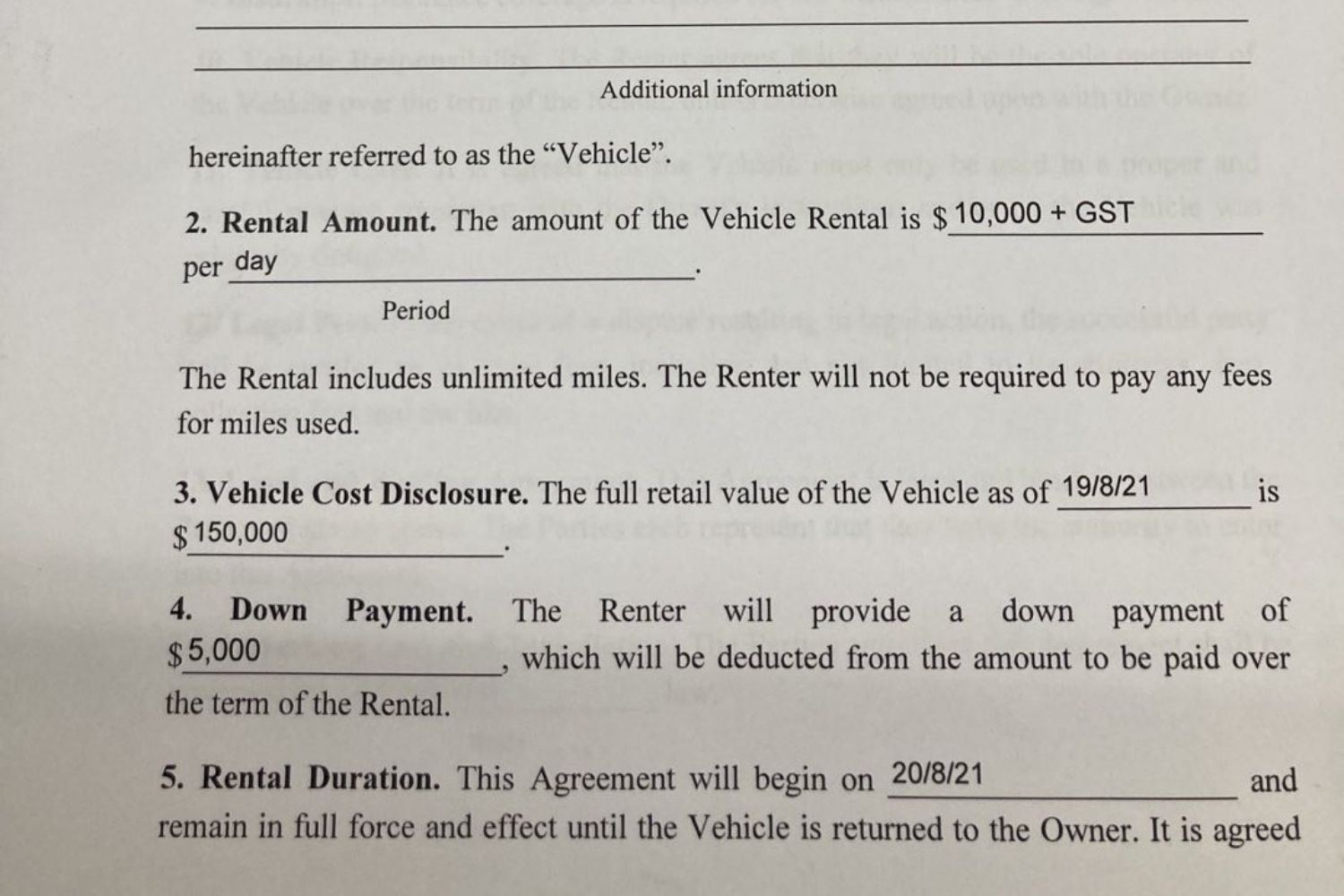 The agreement gag refers to the Excel as 'Louis'

Working together at the Brisbane-based squad since 2012, Triple Eight Engineering managing director and team principal Roland Dane announced in February he would be stepping back at the end of the year, at which point Jamie Whincup will switch from driving to fill these roles.

Having first bought a minor stake in the Supercars powerhouse back in 2015, Jess Dane now owns the team’s second-largest shareholding of 30 percent, which rose by three percent as part of the February restructuring announcement.

Sharing the amusing backstory of how the vehicle rental agreement came about, Dane admitted it has been an ongoing talking point for the duo.

“He never told me directly about using my car for the enduro, it was nice of RD to want to team up with me!” Dane joked.

“Originally it was going to be with Tim Miles but with Tim, in Sydney, it couldn’t happen, so now it will be with Prince Jefri.

“But Roland didn’t know that I was aware he was planning to race in my Excel.

“So, I’ve written up a vehicle loan agreement and left it on his desk, but he’s not in for the next few days, so I sent it off with the car.

“I told the guys ‘Don’t let him turn a lap until he has signed that agreement’, I’m charging a very reasonable fee.

Posting a photo of Jess alongside her new ride last year, Roland Dane noted: “The best way to fully understand the sport is to compete” as he welcomed “QLD’s latest female competitor!”

It’s been a busy year for Jess, between running commercial operations at Triple Eight, her expanding presenting resume, and completing a law degree.

However, the next nine weekends she had booked out for various motorsport events have been cancelled due to COVID restrictions.

Although passionate about all forms of motorsport, the 31-year-old admitted there is one particular discipline she would prefer to compete in.

“I have my rally license, so I’m looking forward to doing something in a rally car, rather than circuit racing,” Dane said.

“Circuit racing doesn’t appeal to me from the perceptive of having the potential to ruin someone else’s day.

“Everyone is out there to have fun and I don’t want to be the person to ruin everyone’s day by going really slowly or crashing into someone.

“I have an agreement with RD, albeit in text messages in a group chat with my sister, that he could have my Excel if he replaced it with a rally car.

“For my birthday last Saturday, he was very happy with himself, he gave me a rally car, but said I didn’t specify what size, then produced a 1:18 model of a WRX.

“That’s his idea of a dad joke and he thought he was hilarious.

“Now I have a model in my house to go with my other model cars though, which is great.”

The Repco Supercars Championship field will return to Victoria for when the Supercars championship resumes at Winton Motor Raceway across October 2-3.