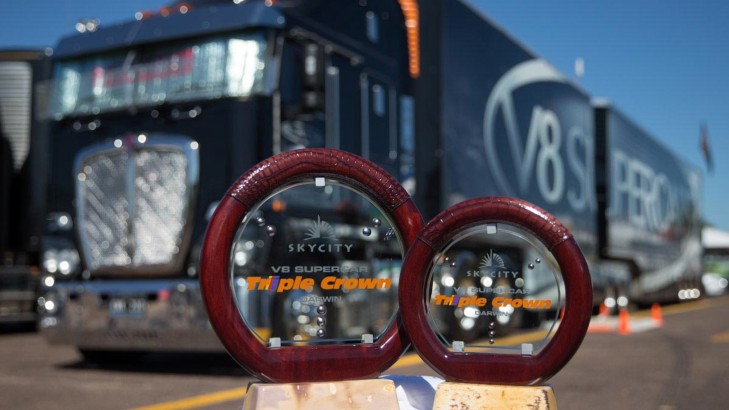 Red Bull Racing Australia has car #1 in the box seat to win the Triple Crown for the first time in history.

In previous years, it has proven too tough to clinch the trophy, awarded for winning all three races (or qualify on ARMOR ALL Pole Position and win two races, from 2009-12).

Whincup has won two of this weekend's three races so far. He also managed to earn both pole positions yesterday, equal Peter Brock's qualifying record, and reiterate to the field that he is coming for the Championship.

Team principal Mark Dutton said Red Bull had not expected to dominate heading into this weekend.

While he didn't want to get ahead of himself, he acknowledged the meaning of creating records in V8 Supercars.

"If we could do it, it would be absolutely fantastic, because it's always cool when it hasn't been done before - it's like going to a new circuit, you always want to be the first to do it," Dutton told v8supercars.com.au.

"But we're not in any way getting ahead of ourselves.

"It would be such a boost to the team. Everyone's worked hard and kept working hard - there hasn't been a lift or anyone digging extra deep to get to this point, we've been working this hard all year. It's accumulation of things - the time it takes, the test day, continuing the hard work to get here.

"Obviously yesterday was a massive reward for everyone here and at home, so to clinch the Triple Crown - if we were fortunate enough to would be fantastic.

"But if it's reversed and Craig is first and Jamie's in second, we're not going to be disappointed that Craig won.

"If Craig won it'd be good because it's always good when both get a win!"

Dutton has this year moved up into the team principal role, with David Cauchi also stepping up to engineer car #1.

Cauchi's relationship with Whincup has been under the microscope despite success in Tasmania earlier this season.

For him, to win a trophy that has eluded so many for many years would be positive just six rounds into the gig.

"We are coming out here to win the race 100 per cent, sowe'll be rapt if we do but at the moment we're keeping it quiet," Cauchi told v8supercars.com.au.

"I think it would be very exciting (to win the Triple Crown). It's been mentioned in the media that it's something we have the opportunity to do, and it would be huge, a pretty good bragging right, but it's not at the forefront of our mind.

"We haven't done very well on the Sunday races unfortunately, Jamie and I, and we've focused on race pace and are happy with what we've done.

"Today on the soft tyre, we're confident, but there's a another variable to yesterday (which was run) on the hards. It's going to be hard work out there.

"We are trying very hard to make sure we do the clean sweep."

While qualifying on ARMOR ALL Pole Position is not essential to winning the trophy, it would help Whincup's plight.

If he wins the Triple Crown, Whincup will keep one trophy and the other will go to the team.

Tune in at 12.40pm Darwin time for qualifying to see if Whincup can beat Brock's record and be in the best possible position to clinch the Triple Crown.