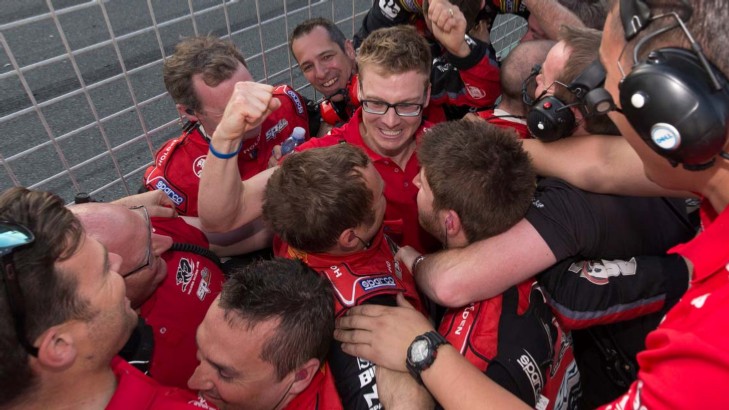 The enduro season has come to an end and after yesterday's thrilling strategy race on the streets of Surfers, the fourth different pair of winners crossed the line first.

It was a stirring performance from James Courtney, returning from injury, and Jack Perkins who took his first ever V8 Supercars win. The Holden Racing Team played the right strategy card pitting Courtney for a splash and dash early after Safety Car intervention, and the 2010 champ capitalised.

The previous day, Shane van Gisbergen and team boss Jonathon Webb backed up their 2014 Gold Coast win to take a pair of surfboards and showed the speed of the TEKNO Autosports Commodore on the last weekend they will race together in Webb's own team.

Volvo was up there in qualifying, as was all-time champ Jamie Whincup, while the usually dominant Prodrive took a backseat and some struck drama on the concrete-lined streets.

Who was your best from the weekend?

The ultimate fairytale -Courtney wins on return and finally cracks the Gold Coast, while Perkins earns his first ever V8 Supercars race win.

Perkins was clearly emotional in the garage in the closing stages, and after Courtney had been supported by his father Larry early in his career, the HRT ace helped take Jack to the top step of the podium.

The #22 started outside the top 10 and was forced to double stack behind the Garth Tander/Warren Luff entry -but after fifth on Saturday, it was victory for the HRT duo that finally drove together for the first time at the Gold Coast.

Bonus points for the exchange with teammate Garth Tander on Saturday that had the teams' nerves at a high and the fans on the edge of their seats. 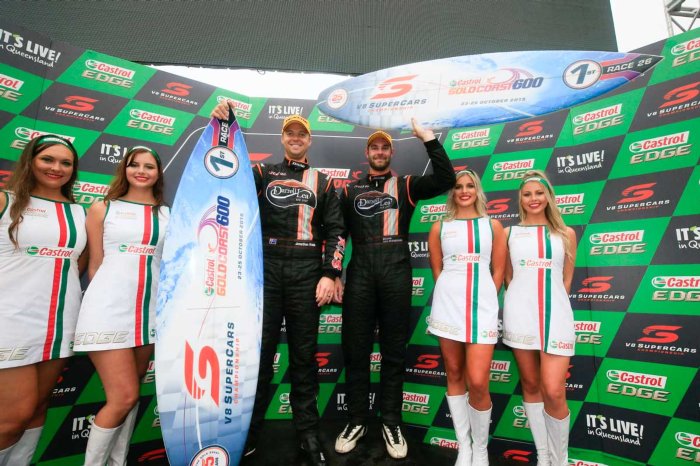 Straight from ARMOR ALL Pole Position to the win, the TEKNO pair looked unstoppable on Saturday, the race they won at the Gold Coast last year.

Webb drove with steady hands and a great start kept track position, when van Gisbergen was his usual flamboyant self on the Surfers streets.

It was the quick Kiwi's first win of the season, and with a fifth-place finish, the Triple Eight bound driver has shown he's back on form for the run home this season.

The other HRT Commodore is coming in the Championship chase, with Tander eyeing a top three finish after a boost in results across the long distance races.

The results bumped Tander from sixth to fourth in the Championship, 140 behind David Reynolds.

Car #2 put in a solid performance over the weekend at a track the Walkinshaw Commodores are consistently strong and Tander has a stellar record with seven victories to his name.

And he didn't go easy on his teammate returning from injury either!

The Jack Daniel's Nissan played a difficult strategy on Saturday, trying to double stint on the Dunlop soft tyre finishing ninth, but made the winning call on Sunday, stopping the same time as the #22 and running the gauntlet on fuel to the end.

The Nissan duo started from 14th and dropped back to 23rd on the first lap, but finished second splitting the HRT cars.

The result is Kelly's first podium since Darwin and Russell's first in V8 Supercars.

Kelly sits firm in ninth position in the Championship and is represents the only manufacturer other than Holden and Ford to fill the top 10.

Who was your best over the weekend? Vote now and comment below.

25/10/2015
Stay In The Know
Sign up to the Virgin Australia Supercars Championship Newsletter
We use cookies to ensure that we give you the best experience on our website. If you continue to use this site we will assume that you are happy with it.Ok