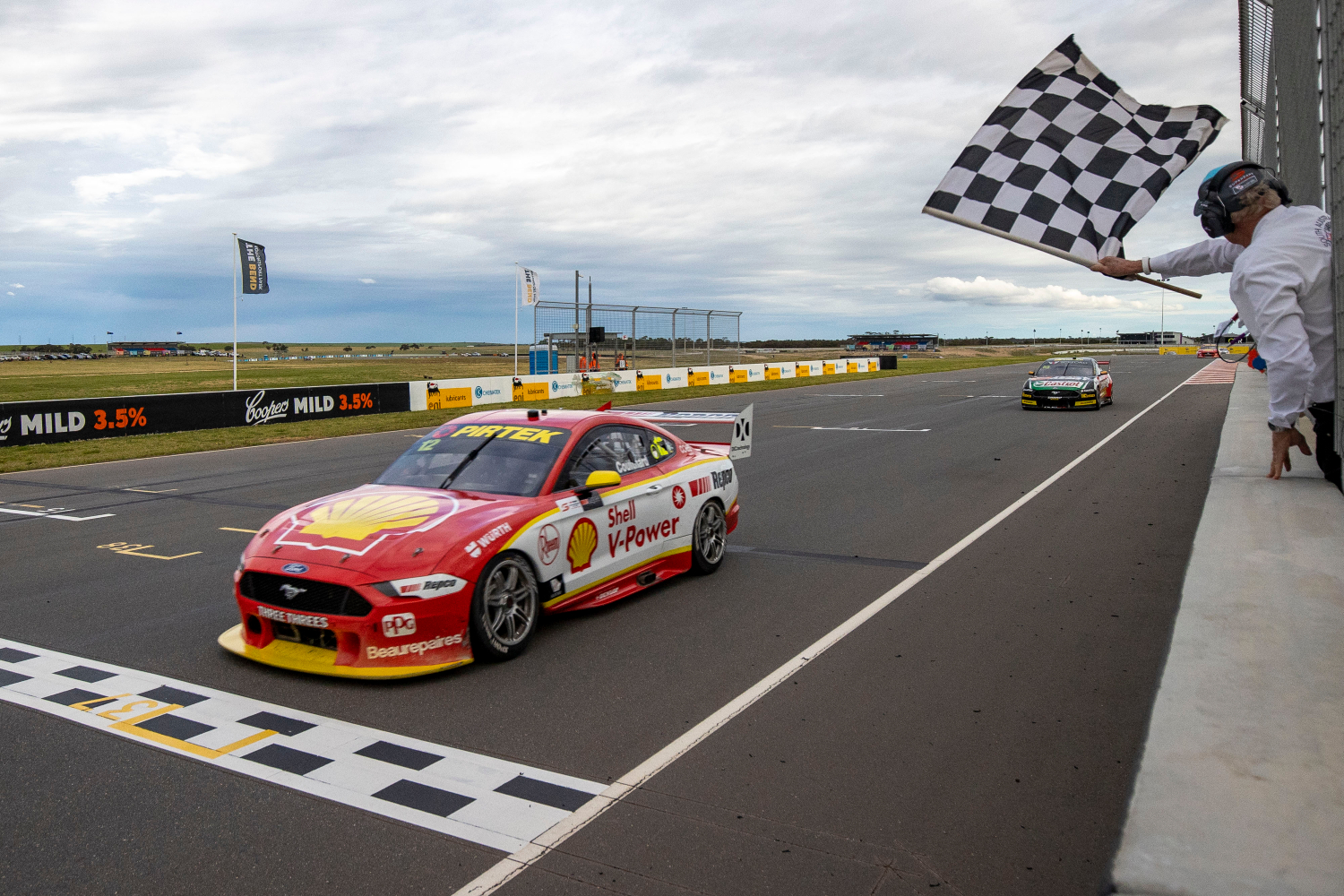 One of the most memorable Supercars seasons produced some brilliant on track action.

The coronavirus pandemic saw racing limited to just 11 events across seven different circuits, but that didn't stop drivers putting on a great spectacle in 2020.

A third consecutive championship for Scott McLaughlin, who Supercars.com ranked as its best driver in 2020, came amid a season of some crazy races.

While McLaughlin ran away with the title with 13 race wins, no victory in 2020 was a walk in the park as fresh names rose to the top of the podium.

The Townsville leg of the season began with a concertina at the Turn 2 hairpin, where Shane van Gisbergen was forced into the back of Anton De Pasquale, turning the Penrite Racing Holden around.

Whincup controlled the race from the start, but Chaz Mostert’s lap 16 stop triggered the Red Bull squad into action. Whincup emerged with a slender lead before easing away to victory, but Waters loomed as a threat as he closed down a nine-second gap to Mostert to take second four laps from home.

Scott McLaughlin made it two wins from three starts at the BP Ultimate Sydney SuperSprint, but the challenge behind came from an unlikely source in Lee Holdsworth.

McLaughlin eased away from Jamie Whincup during the first stint of the 32-lap race and seemed to have had the race covered with a five-second advantage on Whincup when the Red Bull Holden pitted on lap 14.

However, the challenge from Holdsworth kept the champion honest with the end margin just 1.5s.

It was Holdsworth’s first solo podium since Winton 2014, and a fortunate one considering he had escaped side-to-side contact with Nick Percat early on.

"It’s always good to be the one attacking on the way home," Holdsworth said. "I had a pretty wild start, I got up on two wheels hitting Percat at Turn 1 and I was just praying that I didn’t get any damage from that."

Racing returned with a bang following the coronavirus-induced layoff, yet Scott McLaughlin and Shane van Gisbergen remained the dominant duo at the front.

McLaughlin made a brilliant start to the 32-lap opener, pulling a gap of as much as 3.5s over van Gisbergen in the early stages.

Van Gisbergen fought back before the stops, but dropped to fifth as rivals successfully undercut the 2016 champion.

However, the Kiwi managed his tyres to perfection and kept McLaughlin guessing to the flag in a stunning battle for the win.

Van Gisbergen, who started from 12th on the grid, sat just ninth in the order upon the Safety Car restart with nine laps to go.

Although the Kiwi had the freshest tyres of anyone after running a long first stint, he still had to get the job done. The Kiwi made it to third in just three laps, before team-mate Jamie Whincup let him through with four to go to attack leader McLaughlin.

Van Gisbergen scythed down the inside at Turn 11, running McLaughlin wide enough to move Whincup through to second.

The Holden team ran away with a one-two finish, leaving McLaughlin wanting over the manoeuvre: "Shane was playing the team game there, he’s made plenty of clean passes there over the years and that was pretty average, just a big push-off there."

Scott McLaughlin’s first win of the 2020 season came after a race of contrasting fortunes.

In an ironic twist, a strategic error from McLaughlin’s Shell V-Power Racing crew had seemed destined to hand the Sunday win to polesitter Shane van Gisbergen. However, the tables would turn dramatically.

McLaughlin led van Gisbergen off the start line to lead through the opening stint of the race, which came to life after a Safety Car for Chris Pither’s stricken Team Sydney Holden was called on lap 12.

Van Gisbergen emerged in the lead following a flurry of pitstops, with the Shell Ford crew caught napping.

However, it emerged that the #97 Holden had not taken the full remainder of its required fuel drop, with van Gisbergen stopping 10 laps from the end.

Having surrendered a nine-second lead and returning in fourth with fresh tyres for a late charge, van Gisbergen reeled in the leaders before a right-front suspension issue brought an end to his valiant charge, leaving McLaughlin unchallenged to the flag.

From a position of victory, van Gisbergen didn't finish and hitched a ride back to the pits with Cameron Waters.

Nick Percat’s Sydney win seemed a simple one for the BJR driver. Behind him, though, a battle for the ages raged for the minor placings.

James Courtney and Rick Kelly, who started 15th and eighth respectively, also started on the softs and appeared set to finish third and fourth.

However, Scott McLaughlin made a stunning late charge, and pinched third from Courtney on the line in a remarkable battle in the final half-lap.

"That was awesome," said McLaughlin. "I really needed Rick to make a mistake or have a go at James and he sort of did and I got up the inside at Corporate Hill.

"It was all fair game I thought, and then James made a mistake at the second-last corner. I gave him a little nudge and away we went. It was good fun."

Mount Panorama delivered again, with Shane van Gisbergen breaking through for a maiden victory in the Supercheap Auto Bathurst 1000 following a race-long battle with Cameron Waters.

The two horse race was breathless, and van Gisbergen and Waters were flawless after the former took the effective lead during early-race rain.

Van Gisbergen and co-driver Garth Tander defied the polesitting combination of Waters and Will Davison, who eyed a fairytale third Bathurst win after he lost his 23Red drive early in the season.

It took just 33 laps for a major victim to fall, with Jamie Whincup triggering the first Safety Car of the day after he crashed the #888 Holden at The Cutting while trying to pass Brodie Kostecki.

The end of the 161-lap classic was punctuated by incidents for more young guns, with the Safety Car again called on lap 152 after Jack Smith beached at The Chase and Bryce Fullwood crashed at The Esses.

Zane Goddard crashed at the top of the mountain shortly after the restart to set up a three-lap dash to the flag, with van Gisbergen showing his prowess by twice setting the fastest lap of the race after the restart.

Chaz Mostert took third for Walkinshaw Andretti United to give veteran co-driver Warren Luff a sixth Bathurst podium in the past nine years, ahead of the Shell V-Power Racing pair of Fabian Coulthard and Scott McLaughlin.

McLaughlin’s charge was scuppered after the cruel timing of a Safety Car on lap 97 saw co-driver Tim Slade forced to drive an additional stint after he fell short of completing his minimum laps.

That left Slade exposed against primary drivers when the race restarted on lap 100, with the #17 dropping behind Waters, Mostert and Coulthard.

However, the day belonged to van Gisbergen, who claimed his first Bathurst win in his 14th start, with Tander claiming his fourth.

"It’s just awesome," said an emotional van Gisbergen, who had picked up a Holden flag on his victory lap to pay tribute to the iconic brand.

"The last few laps were really tough with the Safety Cars but the team did a faultless job and the car got better all weekend, so thanks to my guys.

"We had a great car and it’s a great way to send out Holden. Thanks to Garth, he did an awesome job. I just wish my Mum and Dad were here."

Whincup won the start from polesitter McLaughlin, with chaos ensuing between Turns 5 and 6 as BJR team-mates Nick Percat and Todd Hazelwood came to grief after the latter was hit by Shane van Gisbergen.

The chaos continued three laps later when Jack Le Brocq and Rick Kelly made side-to-side contact and both speared across the grass at Turn 8, with Kelly rejoining into the path of Jake Kostecki. The Matt Stone Racing Commodore was sent into the tyre wall, triggering a Safety Car.

The entire field raced into pitlane, where Whincup was released into the path of De Pasquale, earning the seven-time champion a 15-second time penalty.

A messy restart saw McLaughlin earn a 15-second penalty of his own by overtaking Courtney before the control line on a messy restart.

De Pasquale had three seconds over Courtney and 13 over Whincup when a second Safety Car was called on lap 23 following a crash for Macauley Jones at the exit of Turn 5.

On the restart, Pye charged to claim Team 18’s maiden podium ahead of team-mate Mark Winterbottom, with Team Sydney’s Chris Pither impressing to fifth. McLaughlin and van Gisbergen could only manage 20th and 11th.

"Obviously we threw everything at it today, which means we’re going to have a struggle tomorrow but that’s OK when you can talk about a win. It paid off," beamed De Pasquale.

"We had a really good car, our cars are always good around here so it is good to get a result. The team has been begging for [a win], so it’s awesome."

Drivers who finished in the top seven places had saved their two sets of soft tyres, with Heimgartner followed by Todd Hazelwood, who snatched his maiden podium.

Heimgartner led the early stages before pitting with second-placed David Reynolds on lap 12. Le Brocq had pitted from third one lap earlier and pounced on Heimgartner while the Kelly Racing driver was on cold tyres.

The quartet ran line astern to the flag. Any driver in the grouping had a chance, and it was Le Brocq who emerged with the spoils. A fast-closing Hazelwood, whose tyres were three laps fresher, pinched third from Reynolds at Turn 7 on the final lap.

The result marked the first Supercars podium without a Shell Ford or Red Bull Holden driver since October 2017.

"It hasn’t really sunk in yet. I don’t really know what to feel," said Le Brocq. "The guys at Tickford have given me an awesome car and an opportunity I suppose to try to prove that we can do the job."

Fabian Coulthard’s only win of 2020 came in the season’s most dramatic race, with The Bend Motorsport Park playing host to a race for the ages.

Title rivals Jamie Whincup and Scott McLaughlin clashed on the opening lap after the former took the lead following a slow start for polesitter Chaz Mostert.

McLaughlin’s lead was wiped away at Turn 17 after Whincup dived down the inside and locked his rear brakes. Both cars hit the grass, with McLaughlin dropping to 19th.

They were eighth and 17th by the time they both pitted five laps later, with McLaughlin emerging from the lane 10s ahead after Whincup served a 15-second penalty. Shane van Gisbergen inherited the lead, and held top spot until he pitted on lap 8.

With rain looming, the action continued as van Gisbergen was harassed by a hungry group behind. Coulthard and Jack Le Brocq found a way past at Turn 1 on lap 23, having been locked in a battle of their own.

While the two Ford drivers fought it out, with the end margin just 0.47s, there was more drama behind as McLaughlin was penalised for a clash with Lee Holdsworth while fighting over fourth.

Whincup struggled to 19th on worn tyres, while Mostert could only manage 12th despite his breakthrough pole.

There were no such concerns for Coulthard, who ended a 41-race winless streak in his 200th Supercars Championship round start.

"Forty-one races is a long time ago and it's my 200th round start as well, so to get a win is awesome," Coulthard said.

"I can’t thank my guys enough, little Mark [Fenning, engineer] got my car good so we bided our time there at the end."