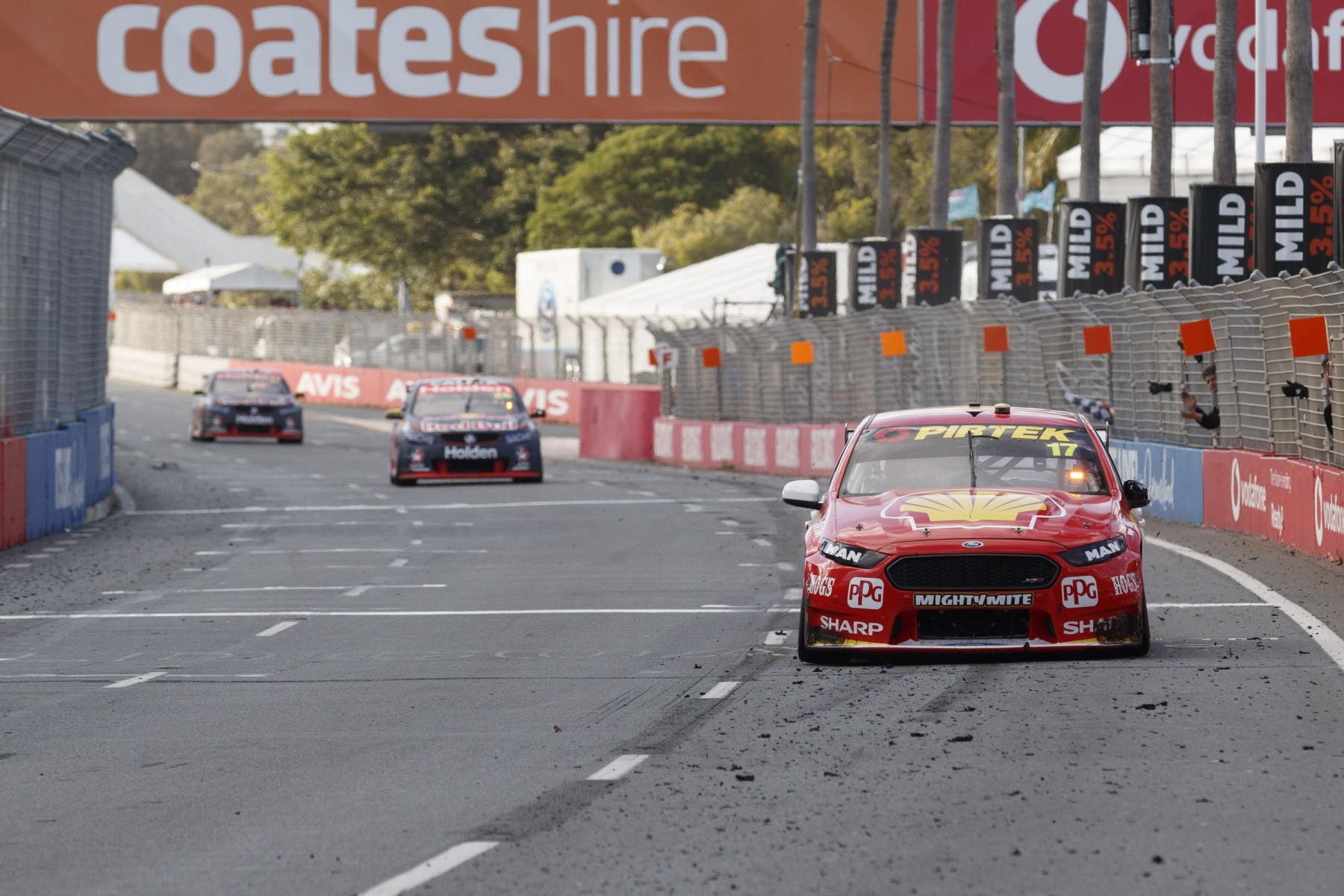 After a frustrating Saturday for teams, drivers and fans alike, Sunday at Symmons Plains turned on plenty of action and a surprise winner in Fabian Coulthard.

Coulthard had been buried at the back of the top 10 early in the contest, looking an unlikely prospect to take DJR Team Penske’s first Supercars Championship race win.

Chaz Mostert led for the majority of the going before slipping off the road less than 20 laps from home, handing Coulthard the advantage.

Coulthard had earlier leapfrogged team-mate Scott McLaughlin at the second stops as the team’s new recruit waited while bumper damage was repaired.

Twenty-two cars had taken the start after Saturday’s accident, with Tekno, Nissan, Mobil 1 HSV and Lucas Dumbrell each forced to withdraw a car damaged in the pile-up.

While no one could predict the mayhem that was to follow in Newcastle, Sunday at Pukekohe had appeared an important day in the title fight.

Having come off worse from their scrap the day before, Jamie Whincup edged McLaughlin to score his first dry pole position of the season before driving faultlessly to win the race.
Not for the first time this year, McLaughlin had emerged from the pits side-by-side with Whincup, but had to pull in behind. It was tense stuff.

Whincup, who later revealed he was suffering food poisoning, left New Zealand with a 30-point championship lead and a big shot at a seventh title.

The battle between Whincup and McLaughlin stepped up a level on Sunday in Townsville, where the six-time champion scored a drought-breaking win.

McLaughlin recorded yet another pole and made a rare good start to lead early, but was jumped in the first stop by Whincup, whose team chose an aggressive undercut strategy.

The pair ran together through the middle stint before Whincup again pitted first, limiting McLaughlin’s chance to fight back.

In the end it was a 105th career win for Whincup, breaking his season duck to draw equal on the all-time list with team-mate Craig Lowndes.

With Coulthard struggling all weekend, Townsville also signalled Whincup and McLaughlin as the two key men in the title race.

A late Safety Car restart spiced up the Race 10 contest and, under pressure from the chasing pack, Whincup slid wide at the final corner 11 laps from home.

Coulthard also made it through on the six-time champion, but was bundled back to third shortly afterwards.

The second round of stops had proven just as tense as the closing stages, with van Gisbergen emerging in front of his team-mate before losing out on the run to Turn 3.

In a season he scored 16 pole positions, there was just one race McLaughlin lined up as a major underdog.

The Gold Coast weekend had been a nightmare for the Kiwi, qualifying and finishing 12th in the wet on Saturday before struggling to 13th on the grid in Sunday’s dry session.

Co-driver Alex Premat, who spun on Saturday, was the star of the Sunday race, dragging the car to fifth before heading to the pits, where yet another spot was gained.

A bold undercut on the second stop then meant McLaughlin vaulted the three Triple Eight entries, which had swept the top grid spots and seemed on their way to a podium lockout.

Although defying expectations that he’d be forced to slow to save fuel, running out post-race meant pushing the Shell Ford into victory lane, capping a memorable day.