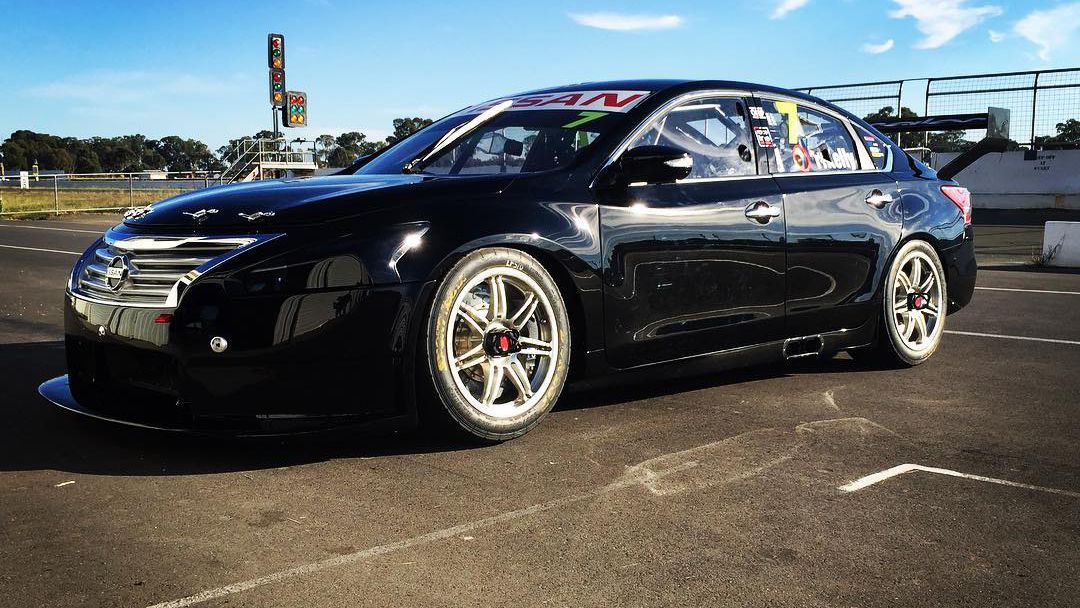 Nissan Motorsport driver and team boss Todd Kelly took to the wheel of his first new Nissan Altima since 2013 at Winton today.

Kelly completed a 60-kilometre shakedown of chassis 007 after his previous car was moved to the Super2 Series with MW Motorsport.

The new car ran in plain black, with its latest Carsales livery not scheduled to be unveiled until Monday.

While strict rules limit the amount of running a shakedown, Kelly said the chance to drive the car was crucial ahead of next Tuesday’s all-in test at Sydney Motorsport Park.

“It was actually good to get back in the car.

“After driving a Supercar for 20-odd years, I worked really hard to reprogram my brain to drive the GT-R for the Bathurst 12 Hour.

“I thought it may have all disappeared, but there’s a few of those things locked into my brain after the sessions in the GT-R and things like that, but it was a good shakedown for me as well as the new car.”

Kelly added the change of chassis was just a routine upgrade for Nissan Motorsport in its fifth season as the factory team.

“There was nothing wrong with the old one,” Kelly said.

“Jack Le Brocq was out there today in my old car.

“I was quite happy with the old one and wasn’t personally pushing for a new one, given Rick (Kelly) had one and Michael (Caruso) had one.

“The guys at work sort of said ‘you should get the next one’ and I didn’t argue. I miss my old car a little bit, but it’s in good hands.”

The team owner also explained the squad is likely to build up an additional car in the coming months.

“We’ve got another two (chassis) kits in the pipeline,” he said.

“We’ll the dust settle a little bit now we’ve built this one and try to catch up with all the spares pre-season.

“Our whole procedure; the kit we start with, our jig, everything in that is the same as what it was for the first one. We’ve now got seven absolutely identical cars.

“In a month or two we’ll start hooking into another one.”

“I miss my old car a little bit, but it’s in good hands”

The hit-out at Winton was also a chance for Kelly to work with new engineer Dilan Talabani who shifts across from Prodrive, where he engineered the Super Black Racing entry.

“I had quite a nasty old year engineering-wise last year,” said Kelly.

“Every second round there was somebody else on my car.

“To have Dilan is something I’m pretty excited about and it was good opportunity to start working together and getting him on the radio, looking at data together and things like that.

“A lot of the guys at our place were quite keen on him. He was quite keen to make the move over.

“The big problem in our sport at the moment is a lack of engineers.

"It’s got to such a high-level in our category that we’ve had no other option by to get engineers from abroad.

“It’s almost impossible, no matter how good an engineer or how experienced they are elsewhere, here is so complex they can’t get straight in and do a good job.

“The main guys that have a bit of experience here under their belt are quite valuable.”

Kelly meanwhile opted against sampling Dunlop’s new tyres ahead of the test next week.

“I had them sitting there, I decided not to put on them on the car – Dilan and I both did,” he concluded.

“We thought we’d be a little bit short to have a decent run at the test at Eastern Creek so we thought we would use them when we’d get more out of them rather than take too much life out of them at Winton.

“They were teasing me all morning!”