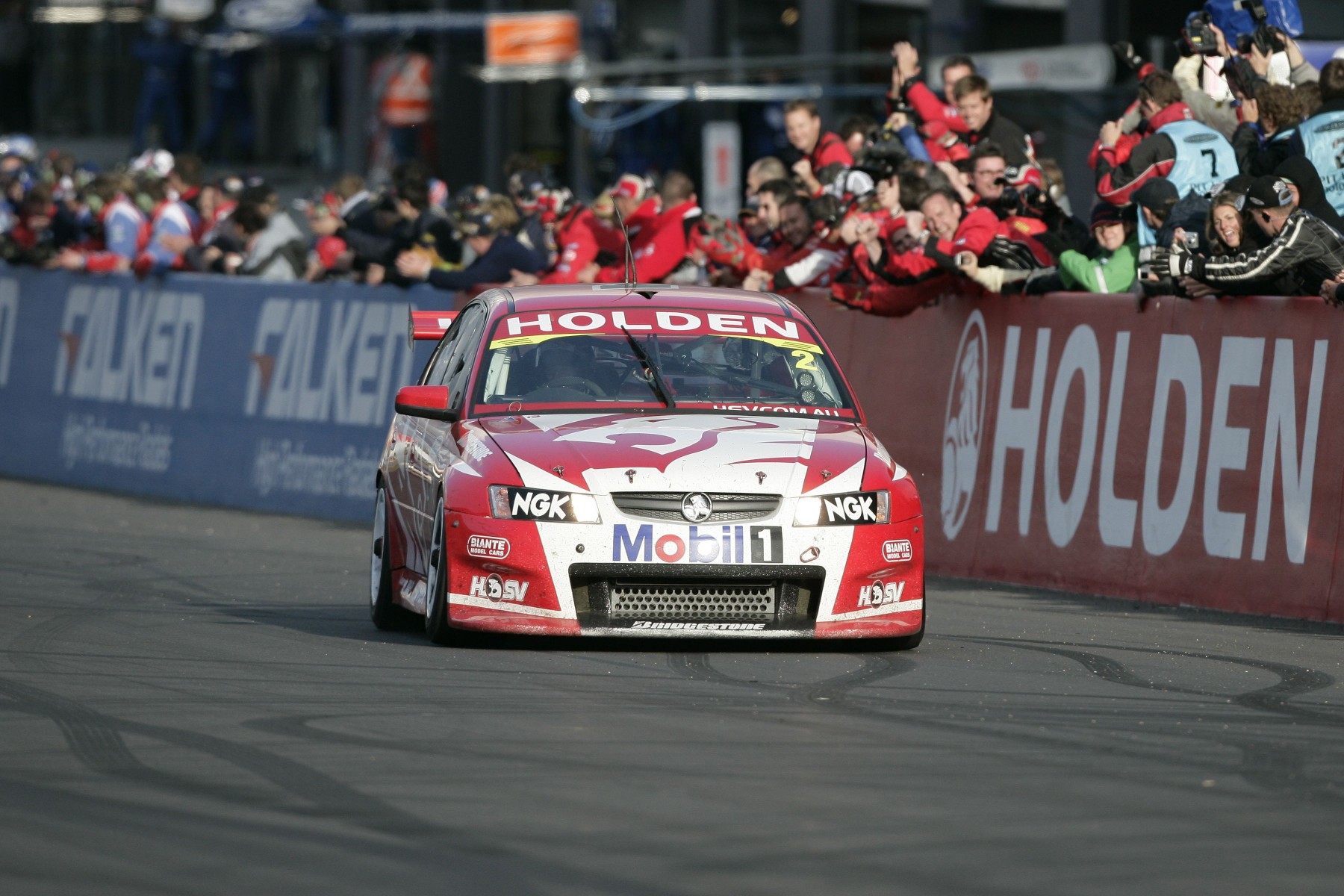 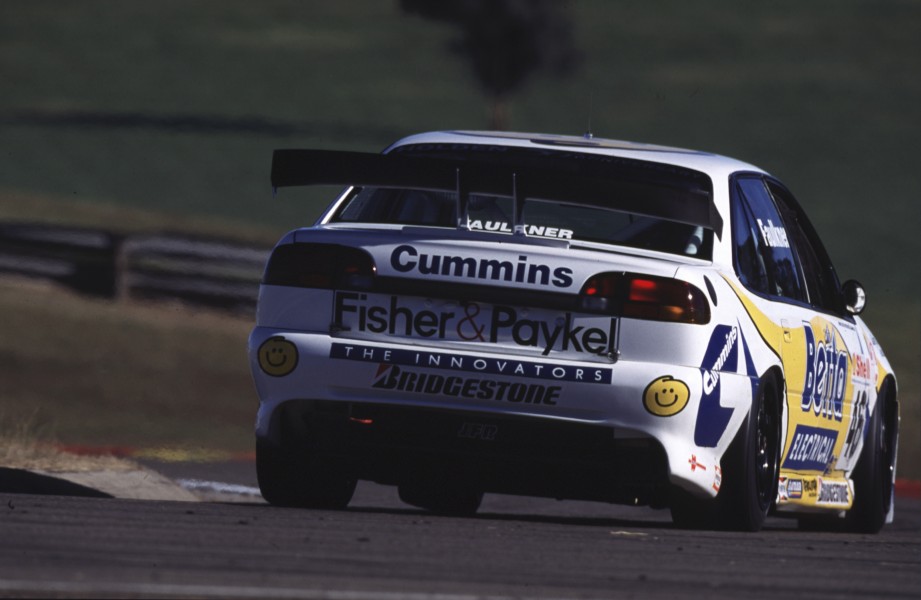 Having finished third in the Formula Holden Championship, an 18-year-old Kelly got a call-up to join John Faulkner’s eponymous team for the Sandown and Bathurst endurance races.

After a troubled Sandown 500 build-up, the pair started at the back of the grid, and Faulkner then got tangled up with Paul Romano in the early stages.

Faulkner flew at Bathurst, qualifying fifth in the Top 10 Shootout, but their challenge was again over before it started, twisting a tailshaft getting off the line. 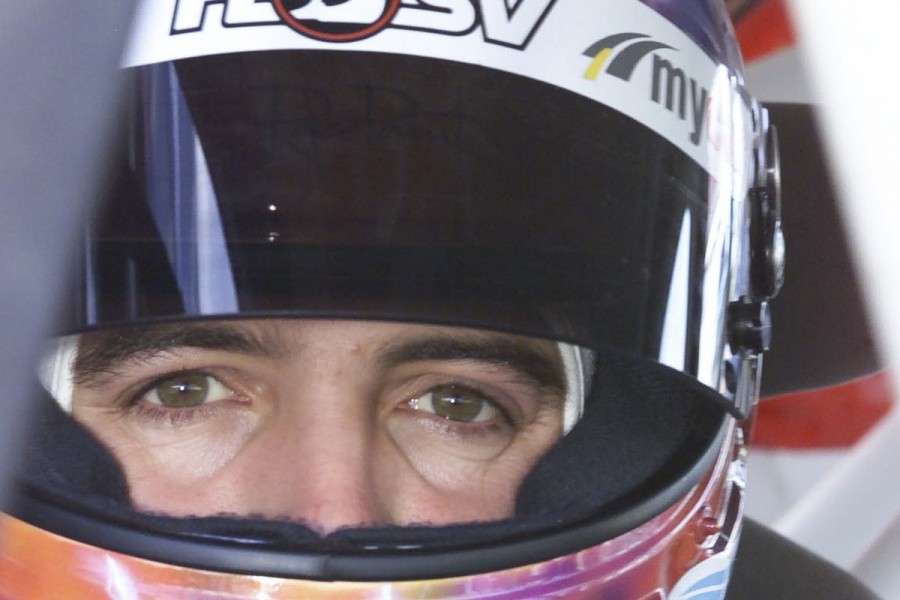 The Holden Young Lions program moved from Gibson Motorsport to the Walkinshaw empire for 1999, with Kelly and Mark Noske joining as drivers.

Kelly crashed heavily in the first race of the season at Eastern Creek, writing off his VS Commodore and limiting his campaign thereafter, before teaming up with Noske for the enduros.

The pair got a VT Commodore for Bathurst and finished a strong sixth. 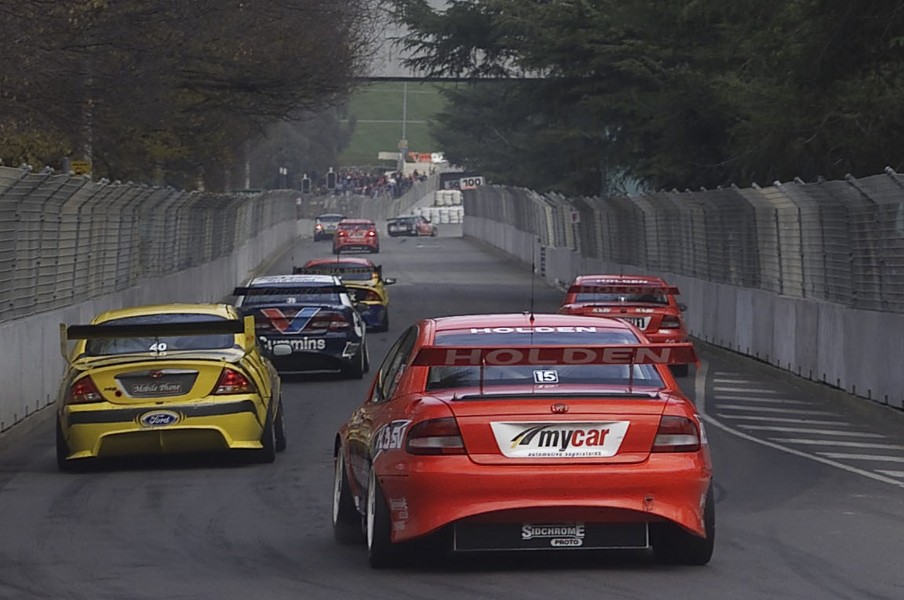 Kelly had the HYL program to himself in 2000, and made history in Supercars’ first reverse-grid race at a brand-new event.

Around the streets of Canberra, Kelly won Race 2 to become the youngest winner in Supercars, until Scott McLaughlin’s victory at Pukekohe in 2013.

He missed three events and finished 17th in the standings, but shone during a wet week at Bathurst alongside Nathan Pretty, making the Top 10 Shootout and finishing fifth. 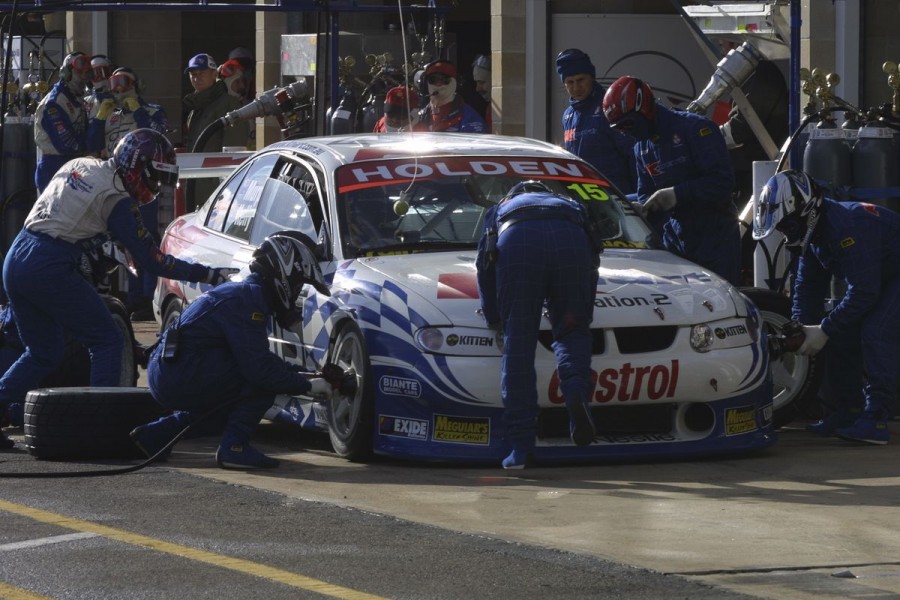 After serving his Young Lions apprenticeship, Kelly moved within the expanded Clayton set-up to the new Kmart Racing outfit alongside Greg Murphy.

The pair finished third in the Queensland 500 and Bathurst 1000, before Kelly took his maiden round victory in the Sandown finale, with a race win and two thirds.

Kelly finished sixth in the championship, two spots behind Murphy. 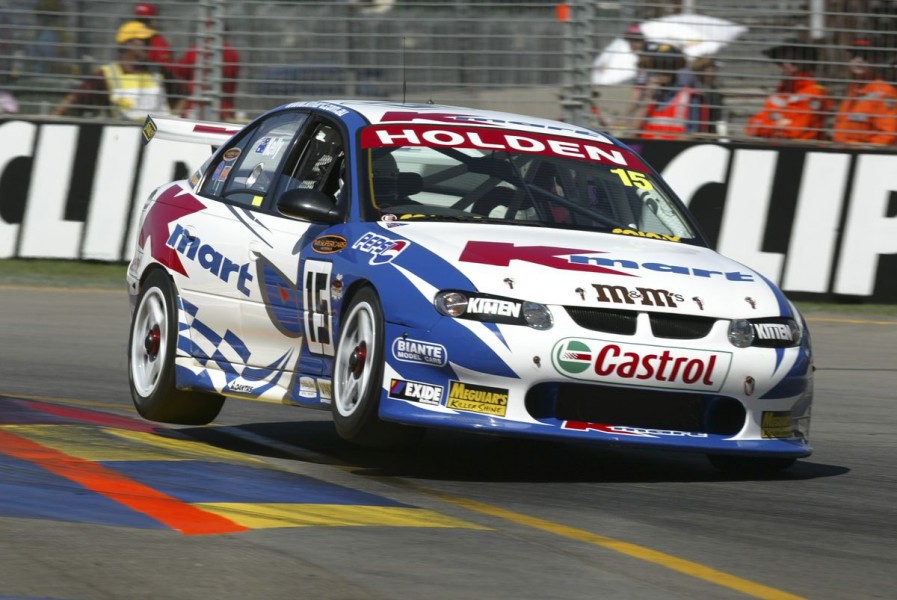 Racked up nine podiums and a victory at Pukekohe on his way to fifth in the standings.

Teamed up with Murphy again in the enduros, finishing 10th at Queensland Raceway before making headlines for the wrong reasons at Bathurst.

The car was handed a five-minute penalty when Murphy left his pitbox with the fuel hose still attached, the pair losing two laps - most of which an irate Murphy spent in a portaloo - and finishing 13th. 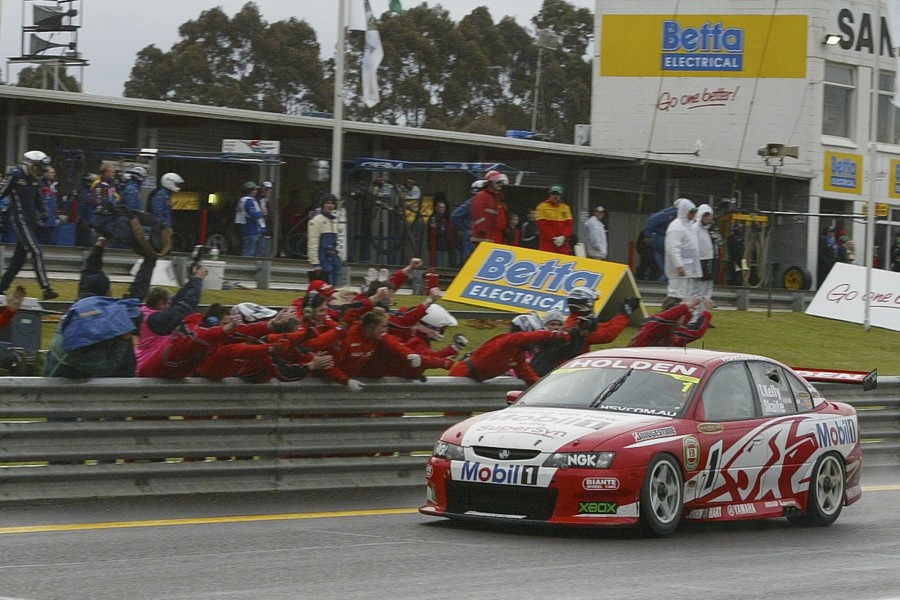 The HRT could not maintain the form that had netted the previous five titles as Stone Brothers Racing and Marcos Ambrose emerged as the force in Supercars.

Skaife and Kelly won the Sandown 500 together with Kelly taking four other podiums and his maiden pole on the Gold Coast on his way to ninth in the points.

Kelly was also part of Holden’s line-up that won the second and final Bathurst 24 Hour, in a Monaro program run by Garry Rogers Motorsport. 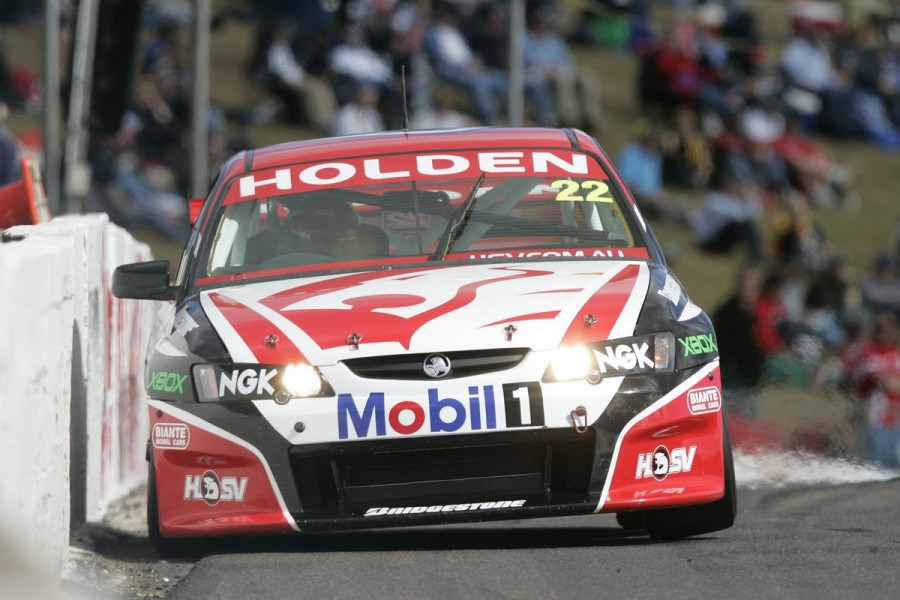 Kelly started a run of finishing ahead of Skaife in the drivers’ standings, taking seventh place.

The campaign netted another single victory, at Hidden Valley, where he finished all three races on the podium and won the round. 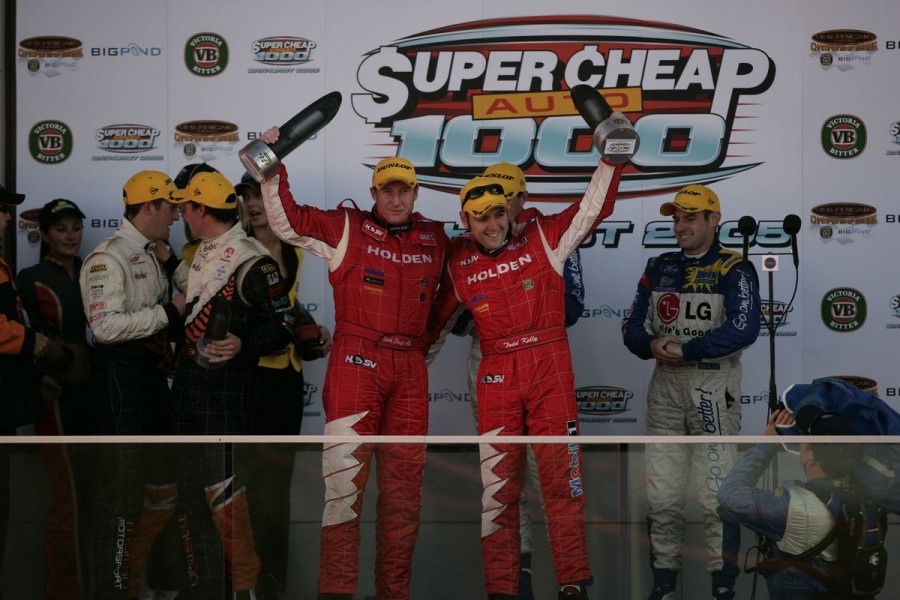 He won multiple races for the first time, finishing the campaign with five, headlined by a Bathurst 1000 victory alongside Skaife. The pair also finished second in the Sandown 500.

Kelly won the round at Hidden Valley for the second consecutive year and earned a place in history as the winner of the first and last trip to Shanghai International Circuit. 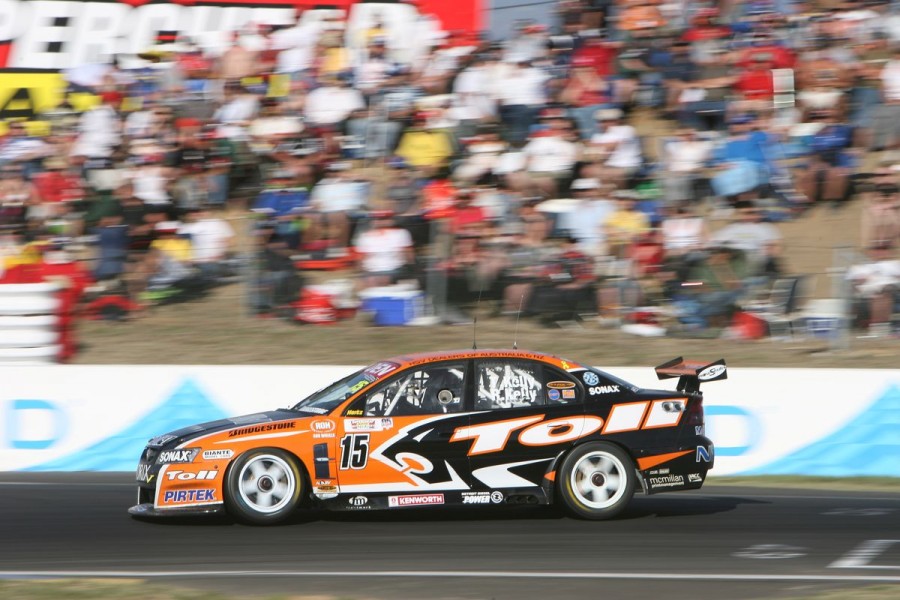 Won five races but all in the second half of the season, including two of the three at the Phillip Island finale as brother Rick secured the title in controversial circumstances.

Kelly was part of a much-publicised driver swap within Clayton for the enduros, trading places with Garth Tander to team up with Rick for the HSV Dealer Team.

The brothers finished second at Sandown and Bathurst, a key part in his younger brother’s triumph. 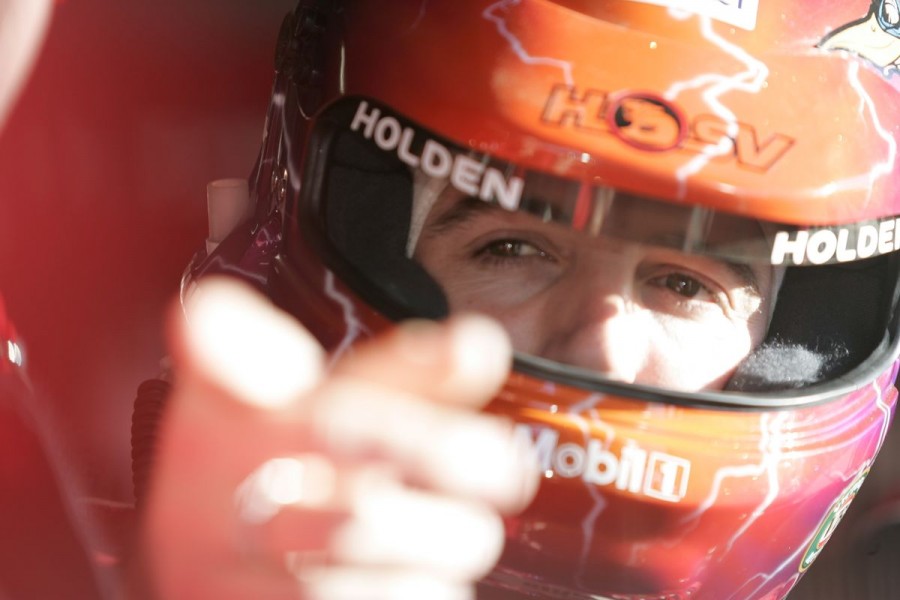 This would be Kelly’s final season as part of the Walkinshaw stable, finishing sixth in points and ahead of Skaife for the fourth time in their five seasons as team-mates.

He bookended 2007 with victories at Adelaide - in the VE Commodore’s debut - and Phillip Island, and recorded three of his six career pole positions.

At season’s end, new champion Tander was moved from the HSV Dealer Team to the ‘senior’ Clayton team as part of a major restructure, with Kelly moving on. 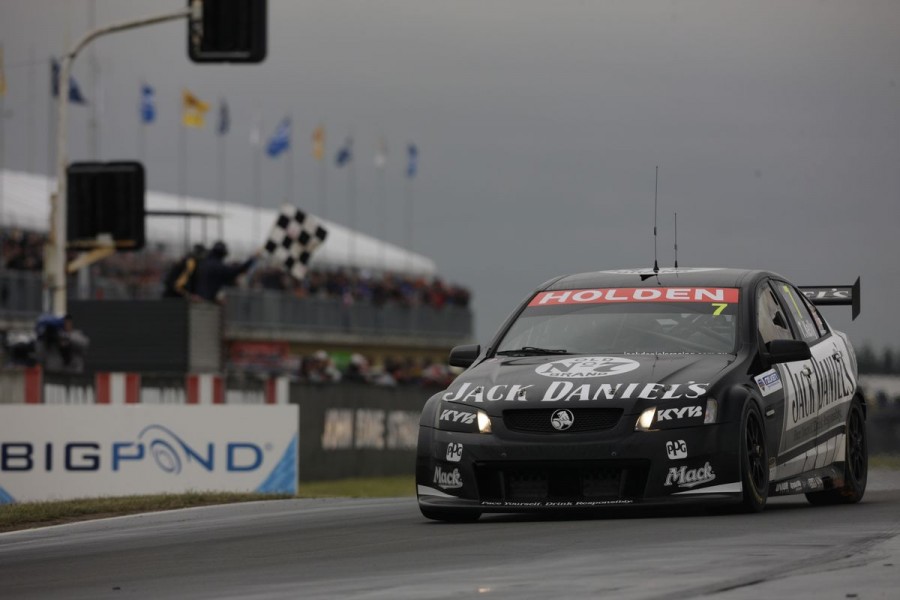 Kelly landed at Larry Perkins’ outfit, for what would be its final season.

Results had dried up for the iconic Perkins Engineering, and Kelly finished 12th in the championship.

The highlight, though, was victory in the opening race at a wet Symmons Plains, Kelly’s last in Supercars to date. He finished the other two races in third place to be second for the round. 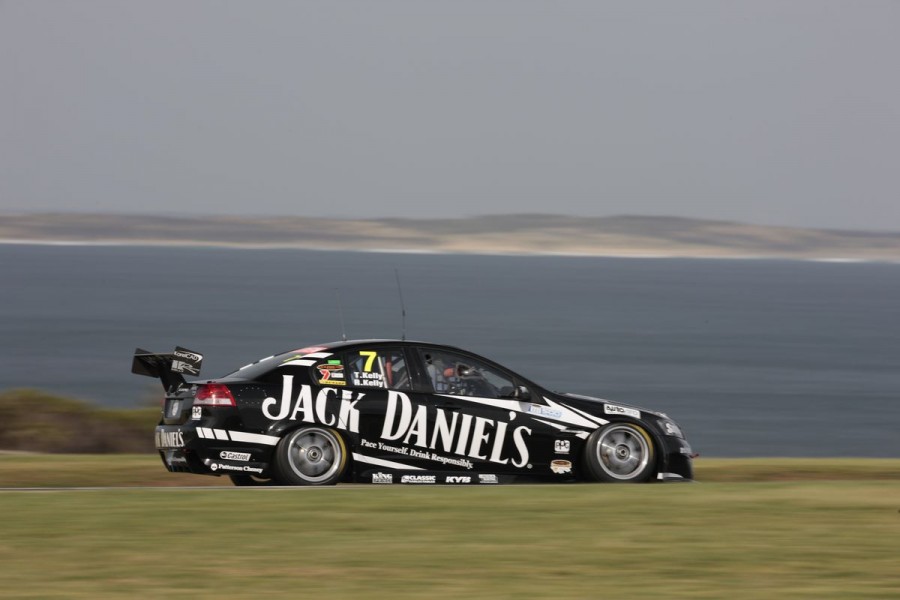 The Kelly family bought Perkins out ahead of the 2009 season, setting out its stand with an ambitious, four-car Holden program.

Todd finished 18th in the championship, at the time his lowest result as a full-time Supercars driver, with a single podium at Barbagallo.

He did, though, team up with Rick again for the enduros, finishing fifth at Phillip Island and eighth at Bathurst. 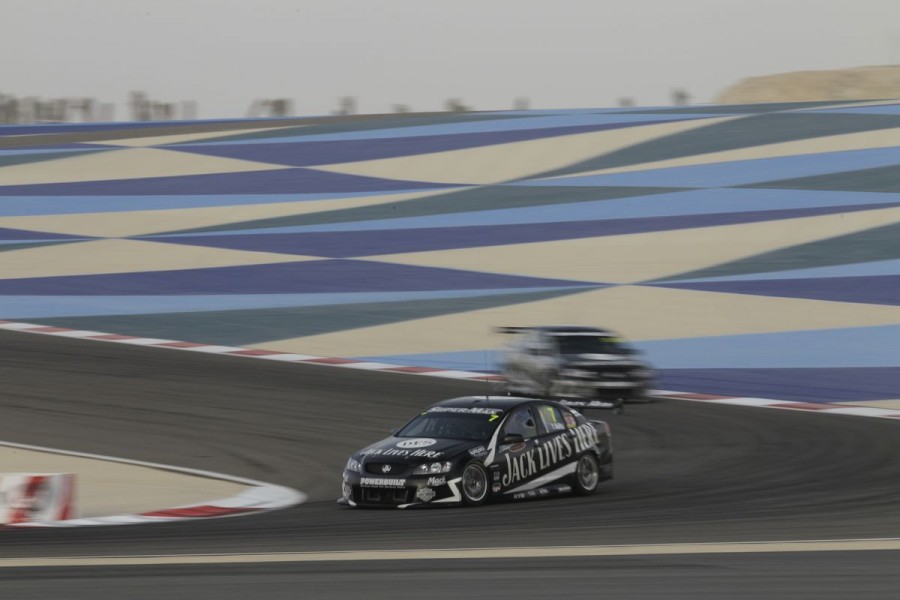 Year two of the Kelly operation brought another 18th-place finish in the championship.

The season yielded five top 10 finishes, two together at Hidden Valley, while he teamed up with old Formula Holden rival Scott Dixon as international drivers raced at the Gold Coast. 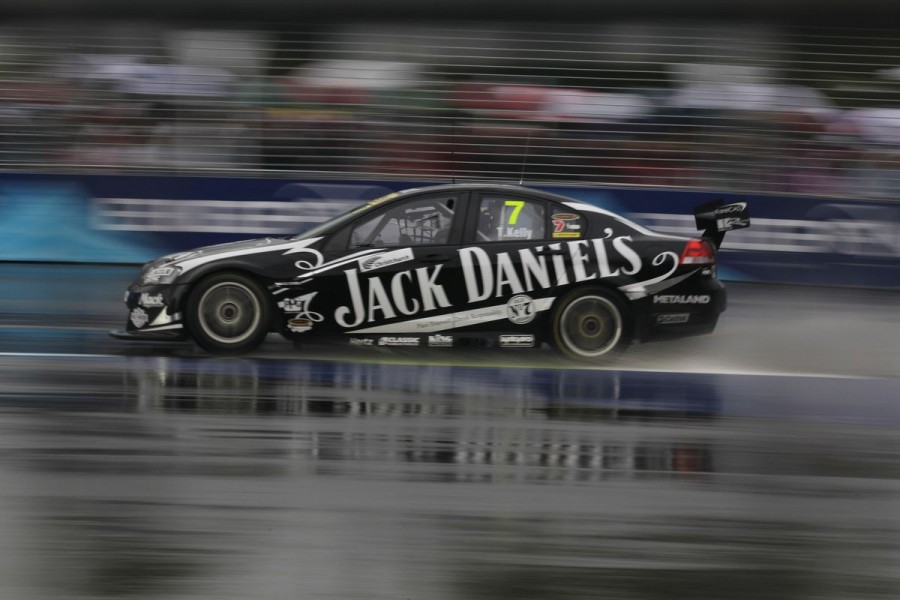 Finished third to join Rick on the podium as Kelly Racing took its first Supercars victory on the Saturday at Hamilton, then joined him on the front row in qualifying on Sunday.

That third-place race finish was replicated at a wet Sandown late in the season - another race won by Rick from pole - on Todd’s way to 18th in the points again. 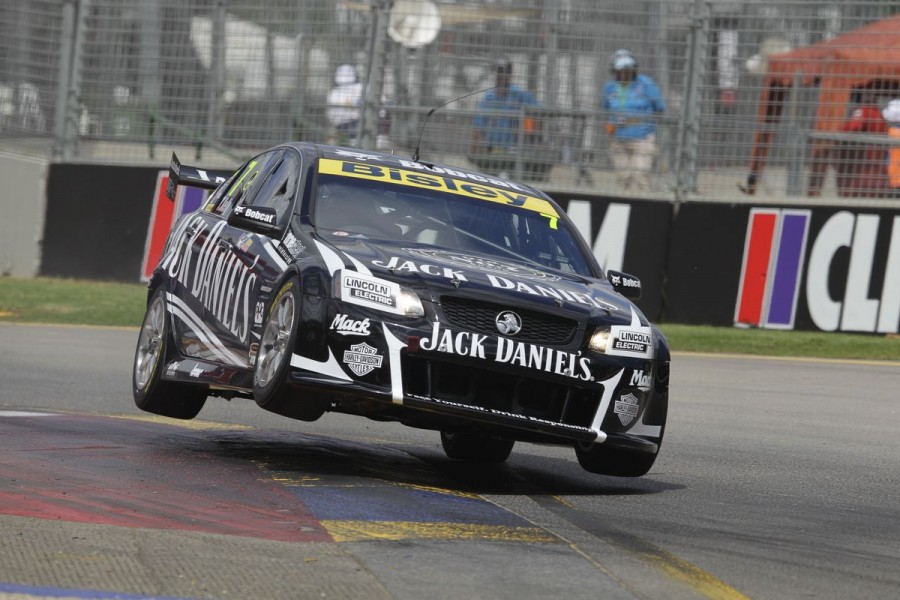 Kelly finished 22nd in a campaign truncated by a shoulder injury that sidelined him after the Bathurst 1000.

What would be his last season in a Holden started brightly, with four top 10 finishes in the first six races, but none thereafter. 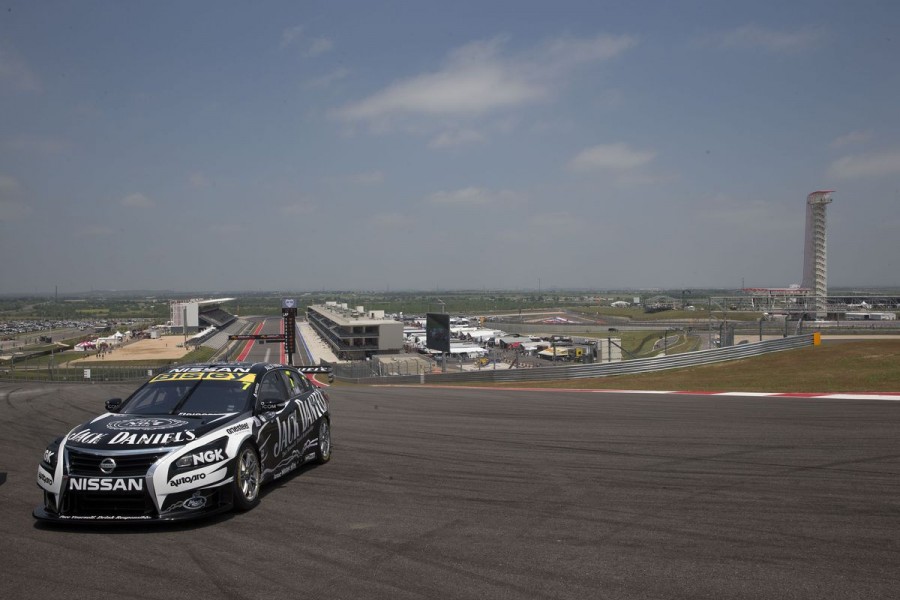 A major coup for the Kelly family had come in early 2012, when it became the first Supercars team to entice a new manufacturer - Nissan - to join the championship.

The rebranded outfit rolled out four Altimas built to the New Generation platform at the start of the year.

It took a one-two at Winton mid-year with James Moffat and Michael Caruso, while Kelly finished 25th overall with a pair of top 10s to his name. 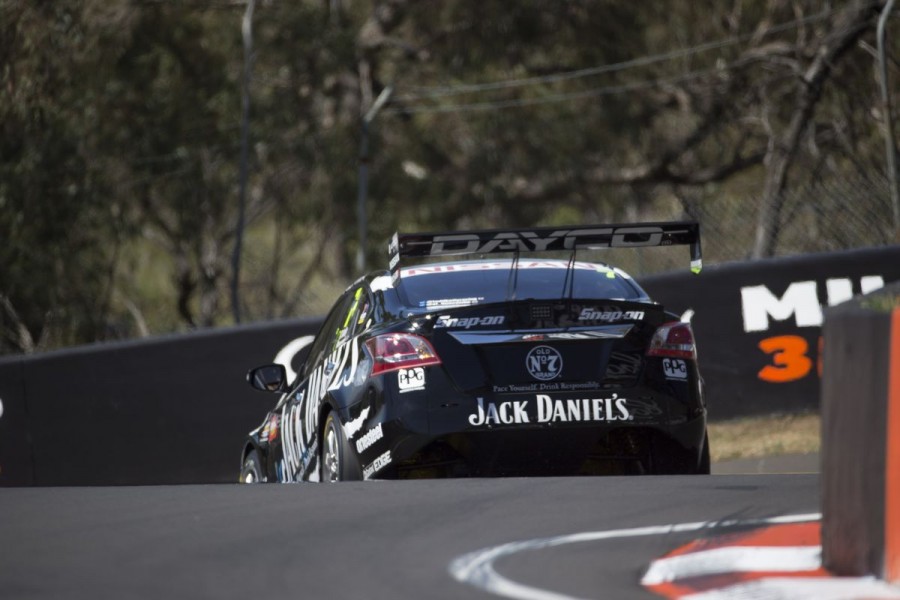 Kelly’s fortunes improved slightly in the second year of the Nissan program, finishing 22nd in the points.

Grabbed a fifth at Phillip Island, while seventh at Bathurst alongside Nissan GT driver Alex Buncombe was his best Great Race result since 2006. 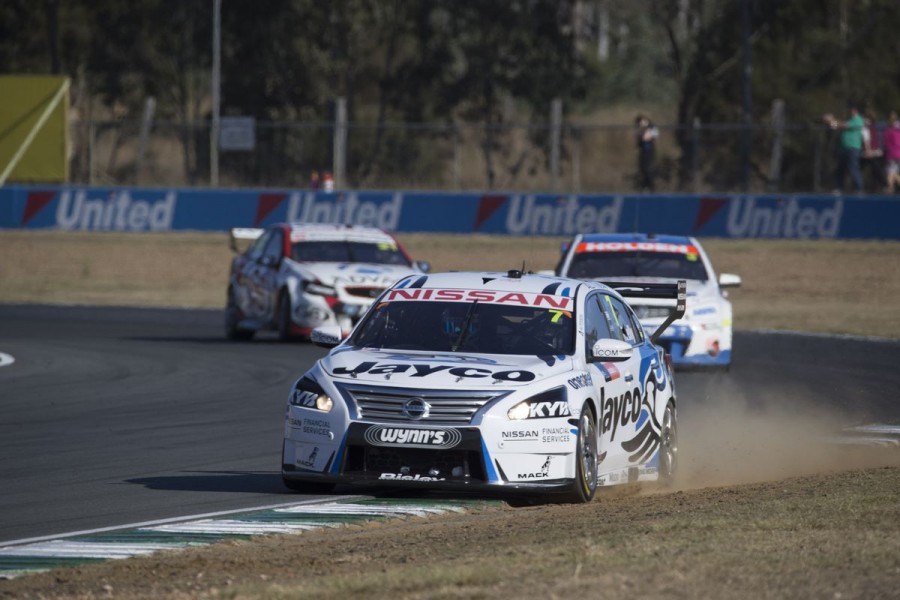 Further progress netted 17th in the standings, at the time his best result with the family outfit.

Grabbed fifth-place finishes at Winton and Phillip Island and a sixth at Queensland Raceway.

The latter was followed by an engine failure and emotional outburst captured on in-car camera, showing that Supercars still meant plenty to the veteran. 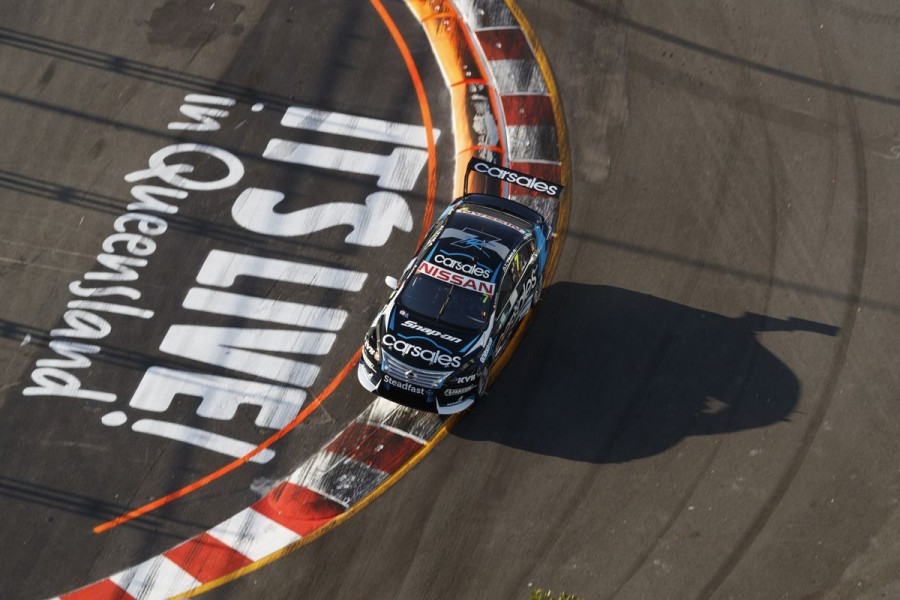 Kelly moved further forward in 2016 to finish 14th, one spot behind Rick in the standings.

The season included nine top 10 finishes, including seventh at Sandown with Supercars debutant Matt Campbell, and a front-row start at Hidden Valley. Entering this weekend’s season finale, Kelly’s last event as a full-time Supercars driver, the 38-year-old is 19th in the championship.

Announcing his retirement, Kelly revealed he has spent the year battling a knee injury that has twice required surgery.

He did, though, race something other than a Supercar for the first time in nearly 15 years, joining Nissan’s Bathurst 12 Hour and finishing eighth in a GT-R Nismo GT3.