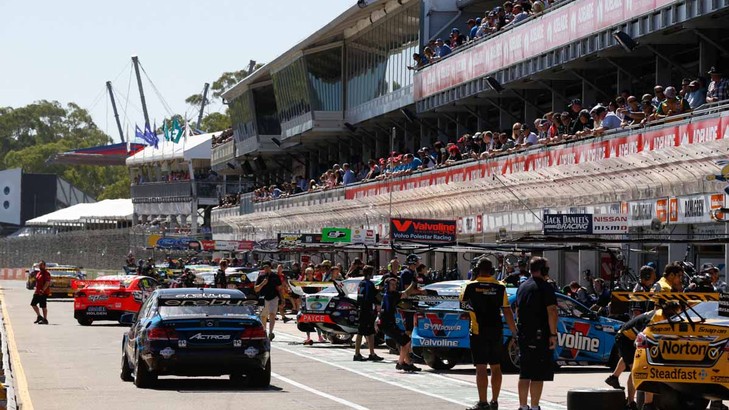 Today’s twilight race is the main attraction, but there’s plenty of V8 Supercars action all day at the Clipsal 500 Adelaide.

The first race of the V8 Supercars season begins at 4.20pm local time, with Red Bull teammates Jamie Whincup and Craig Lowndes to start on the front row.

Backed up with the Dunlop Series final race of the weekend, we will finally get to the part we’ve all been waiting for – the twilight start on the streets of Adelaide. Scott McLaughlin lines up alongside Lowndes in his Volvo S60 after a stellar qualifying debut landing him on the front row.

But the races aren’t the first time to see the V8 Supercars drivers.

After a healthy dose of support categories kicking off from 9am, the drivers – split into two groups – will do Q&A sessions at the GoPro TrAction Zone from 11.15am.

The Dunlop Series will qualify between the groups, giving you the best of both worlds – great racing and the chance to see the drivers outside of the car.

The weekend’s final practice session is shortly after at 12.50pm. Aussie Racing Cars, Porsche Carrera Cup, the Aussie Bandit Utes and the Nissan Time Attack will keep you entertained – and before you know it, the first of the two 125km races will be starting.

With Dunlop Series between the first and second V8 Supercars race – and then Empire of the Sun with Kimbra headlining the 8pm concert – there isn’t a minute to spare.

Remember to snap plenty of photos and share with #MyV8 – the best images will be picked up by V8 Supercars and run in exclusive fan galleries.

There’s something to entertain everyone at the Clipsal 500 Adelaide, with a number of displays and hang outs around the street circuit.

The Family Fun Zone is perfect for the kids, and you can also head to the GoPro TrAction Zone, where there’s everything from beachwear parades, the Showtime FMX Freestyle Moto and Porsche Kids Driving School, decked out like a mini community so children can learn the road rules while having fun.

Check out some of the world’s best, with the BMX RAMPage, eight top BMX Dirt Freestyle riders competing over the four days.

Those who’d prefer to chill with a cold drink can hit Coopers 1862 Bar, or the Pit Straight Adrenaline Bar.

Or lose yourself in Sideshow Alley – scream yourself silly on your favourite ride.

There are plenty of displays, with everything from Ducatis, to Coca Cola memorabilia, to vintage caravans on display.

Tickets are still available for the event – secure yours now and head in to the track for the first races of the 2014 V8 Supercars Championship.

And public transport is free for trains, trams and buses – so what are you waiting for?!