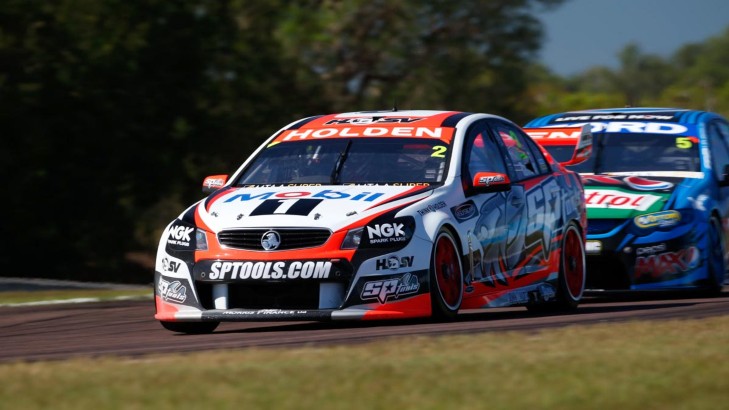 Factory Ford and Holden racers Garth Tander and Mark 'Frosty' Winterbottom have both given the thumbs up to their epic dice which highlighted the opening Race 17 of the SKYCITY Triple Crown Darwin 400 this afternoon.

While Jamie Whincup ran off into the distance for the win in his Red Bull Racing Commodore, it was the fight between the Holden Racing Team Commodore VF and Ford Performance Racing Falcon FG II that was the highlight for spectators at the Hidden Valley circuit and watching on television.

While Winterbottom never passed Tander, he did tap his bumper more than once and they ran sideways through the first turn on one lap.

"We need to tune the car up and get it better in spots that allow you to pass."

"He's good to race, he give you a bit of room but he's hard. You are always going to have that side contact, but it's good to see the two factory teams going at it and good to see him back up there because he's had a hard run."

Tander's fifth place was only his second top 10 finish of the year. He has a strong chance of adding a third top 10 because he qualified sixth for race 18.

"That was not too bad, we'll tune it up for the next one," Tander said.

He had no drama with the contact Winterbottom made as he pushed for the pass.

"It's all part of the game, I would have done the same to him. It was good racing, it was good fun, sliding around.

"He was probably not as strong as me under brakes and I knew if I could go in that little bit later I wouldn't have to defend and he wouldn't be able to pass me," Tander added.

21/06/2014
Stay In The Know
Sign up to the Virgin Australia Supercars Championship Newsletter
We use cookies to ensure that we give you the best experience on our website. If you continue to use this site we will assume that you are happy with it.Ok