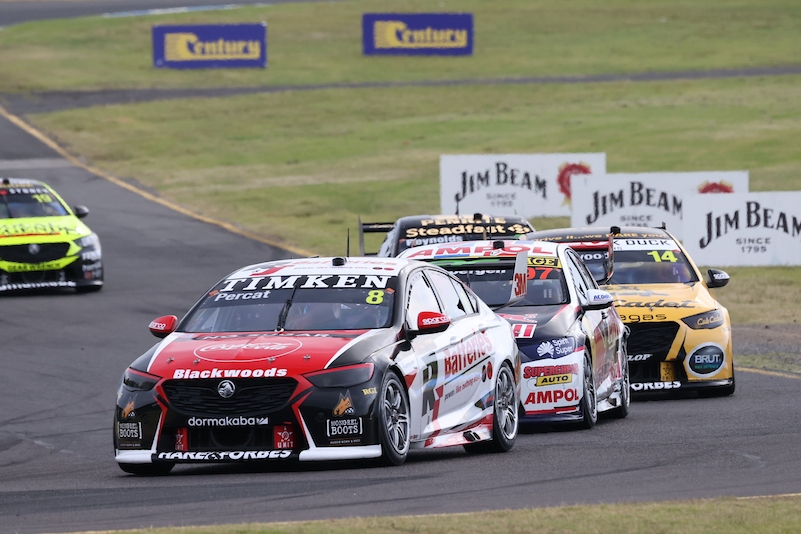 Nick Percat flew under the radar at the Penrite Oil Sandown SuperSprint to launch into the top 10 in the championship.

Percat recorded his best Sandown result since 2012 on Sunday, finishing inside the top ten three times at the Melbourne circuit.

A consistent performer in race trim across the weekend, the Brad Jones Racing driver netted finishes of seventh, sixth and ninth to vault to eighth in the points standings.

The 2011 Bathurst winner's charge at the rain-soaked event didn't come without its hiccups, with Percat’s charge from 14th to seventh in Saturday's Race 3 featuring a coming-together with the Shell V-Power Racing Team's Will Davison.

Contact with Percat at Turn 3 saw Davison run through the infield and collect grass, with the #17 brought in shortly afterwards for overheating issues.

Percat went on to finish seven positions up on his qualifying effort, while Davison slumped to 22nd.

Speaking about the incident to Supercars.com, Percat denied any wrongdoing.

"It's the way it is at Sandown; if you want to hang on the outside, you're going to end up off the road quickly," he explained.

Percat was adamant he "never crossed the line" and stated the contact was "minimal from his end".

"I followed Andre [Heimgartner] through the back straight and Will didn't want to yield, so off he went through the paddock," he added.

"It made for a spectacular photo and re-entry, but he sucked up a lot debris and grass in his car.

"Obviously it's not how he wanted his race to finish, but at Sandown, it is hard to pass here.

"If you see a gap, you put the car in there. For me, there was barely any contact; he just had nowhere to go."

Qualifying eighth for the race, Davison was one of the last cars to head to the pits on lap 25 and emerged in ninth place, with 11 laps remaining.

With only five laps to go, the two-time Bathurst winner had a wild ride through the grass, with the overheating dramas consigning him to a finish two laps off the pace.

The incident was investigated, with stewards advising that no rules were breached.

Adelaide-born Percat said he spoke to Driving Standards Advisor Craig Baird following the race, but didn't reach out to Davison, adamant he had done nothing wrong.

"He's been complaining a bit more than me about it," Percat said.

"I don’t think there’s anything to speak about.

"The fans want to see some argy-bargy, and a bit of push and shove, but you never cross the line, you never wipe someone out; but for me, it was just racing."

Percat is the highest-ranking BJR entry in the championship in eighth, ahead of teammate Todd Hazelwood in 13th.