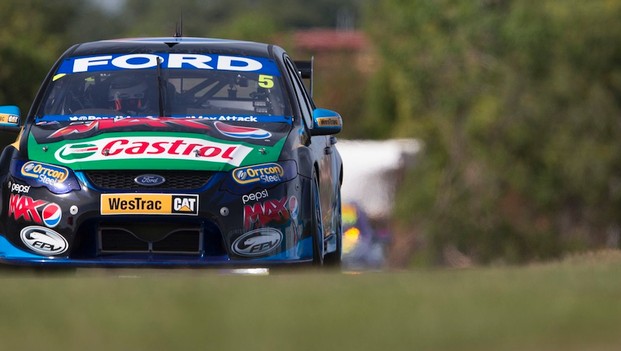 While Mark Winterbottom was fastest today,he had no idea whether that result would carry over to count in the racestomorrow.

Though the Pepsi Max Crew FPR driver waspositive in the press conference after running quickest in the fourth session ofPractice at the SKYCITY Triple Crown at Hidden Valley Raceway in Darwin, healluded to the “bullshit meter” of Fridays. Some cars are running pre-marked hards, other on softs – at times, on wet weather tyres in thedry – and at the end of the session there is nothing comparable.

Winterbottom believes there should be a point during Friday practice when cars are all on the same quality tyre.

“We’re all tyre limited in thisChampionship, and you don’t know who’s got what,” Winterbottom said.

Qualifying pace and race pace – on the hardtyre – wouldn’t be clear until the end of qualifying and the 60/60 SuperSprint race tomorrow.

“The bullshit meter’s off if you’re all onthe same tyre, but I’m aware of the budgets and the things the team has to dealwith.

“Maybe we have to use a set of tyres andtake it into the race and deal with it then, but there has to a be a point (onFriday) when we’re all on the same tyre, so it’s not ifs and buts, it’s a trueindication… You want to know where you’re at.”

This weekend’s tyre allocation meant teamshad eight pre-marked (hard or soft) tyres for Friday (and those in PracticeOne had an additional set of four).

Allocation for the remainder of the meetingis 12 hard tyres – which have to be used for all racing on Saturday – and eightsoft. Both compounds must be used during both of Sunday’s races.

At the last race weekend at the Austin 400, Winterbottom aired his opinons on the tyre allocation cuts.

“After about two runs around here the tyreshave had it and you’re sliding around and don’t get a good read on the car,”Winterbottom said. “I think we’re ok with what we’ve developed and got inthe car.”

When speaking about his day, while thirdfastest Scott McLaughlin said the session was a good result for his team, he alsomentioned how difficult it was to assess performance on Friday.

“Gee, you don’t know where you’re at,” therookie said. “I’m happy to be up therebut as far as the main day, we’ll see where we are tomorrow afternoon andSunday afternoon.”

See the Drivers’ Quoteboard to see whatothers thought of Friday at Hidden Valley – there are many mentions of tyre use.

Mark Winterbottom  ›
15' Pepsi Max Crew ›
2013 SKYCITY Triple Crown  ›
Stay In The Know
Sign up to the Virgin Australia Supercars Championship Newsletter
We use cookies to ensure that we give you the best experience on our website. If you continue to use this site we will assume that you are happy with it.Ok