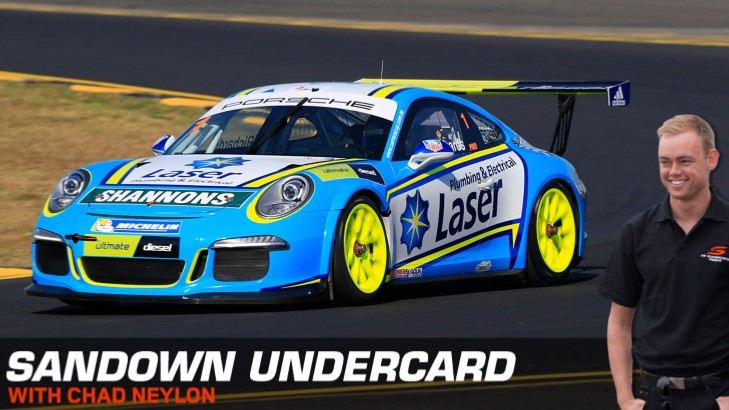 The support racing at Sandown is going to be excellent - the categories we have lined up are top drawer and they all have an enthralling points scenario playing out.

There's also a few sons of former 'enduro' winners to watch out for too.

I don't believe it but after scoring zero points in the first four races of the season Nick Foster is in a position where he can win the championship.

He's still a whopping 90.5 points behind series leader Steven Richards with only three events to go but in the last three rounds he scored 177.5 points more than Richards - so, yeah, it's doable. At the rate he's going he'll be leading the championship before we even get to the last round in Surfers Paradise.

I should also mention that a bloke by the name of Craig Baird is second in the points at the moment and can never be written off.

Want some young guns to watch out for? 20-year-old Matt Campbell broke through for his first race win recently in Sydney and 17-year-old Aaron Seton (yes, son of Glenn) will make his Carrera Cup debut.

The V8 Utes have now entered the second half of their season and with four rounds to go it's still very much an open tailgate.

Ryal Harris had his lead slashed to just 13 points at the last round in Townsville. He now has the in-form Adam Marjoram and David Sieders breathing down his HANS Device.

Harris won three out of the last four rounds last season in a hot streak that started at Sandown, repeating that this year will be difficult as he's carrying 40 kilograms of ballast for leading the championship.

Keeping with the theme of second-generation debutants we have Ben Grice (no prizes for guessing who his father is) making his debut in the V8 Utes this weekend.

Is Grant Denyer a good driver? The survey says, 'yes'. All those years doing weather reports really paid off at the last round in Sydney, as he calmly steered his Ferrari to victory in a wet race.

He's now third in what appears to be a 'two-horse-race' in the championship and what better place for a two horse race than Sandown.

Nathan Antunes has a slim 11-point buffer over German GT ace, Christopher Mies and this is the penultimate round, giddy up.

Sydney was a great display of skill from the F4 kids. It was pouring rain for most of the weekend and not one of them crashed, that's a ripper effort for a bunch of lads who are barely old enough to vote.

Weathering the conditions the best was Thomas Randle who took his first round win without winning a race. Points leader, Jordan Lloyd picked up two race wins while Nick Rowe dominated the wettest of the races. If it rains this weekend (and let's be honest, this is Melbourne after all) expect the young speedway racer to be near the front.

Porsche: We've had five different pole sitters from the five Carrera Cup rounds so far. Richards, Baird or Campbell could help the streak continue to six.

F4: Formula 4 is set for some girl power this weekend as Caitlin Wood becomes the first female to race in the category. Wood is actually the only lady racing on the undercard.

You can check out the undercard action on Fox Sports 506 and Network Ten this weekend.