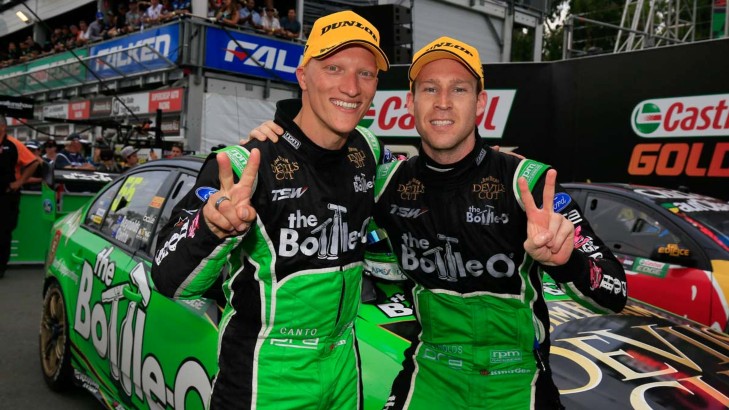 Even though his future at Prodrive Racing Australia is in severe doubt, David Reynolds has vowed to fight his way past Craig Lowndes into second place in the V8 Supercars Championship and deliver a one-two finish for the team that is expected not to renew his contract at season's end.

After finishing second in today's opening 300km race at the Castrol Gold Coast 600 in the Bottle-O Ford Falcon FG X with long-time co-driver Dean Canto, Reynolds has closed to within 24 points of the Red Bull Holden Commodore VF ace, who finished a close third.

But Reynolds' team-mate and championship leader Mark Winterbottom had a shocking race, finishing 23rd in the Pepsi Max Falcon he shares with Steve Owen. That has allowed both Reynolds and Lowndes to cut the gap by around 100 points.

Winterbottom now has 2527 points, Lowndes 2221 and Reynolds 2197. Including tomorrow's 300km race there are still a maximum 1050 championship points up for grabs.

But rather than locking his sights on Winterbottom, Reynolds says his motivation is to pass Lowndes and then finish one-two in Prodrive's final year as a representative of the Ford factory.

"Mark's still got a massive lead in the championship so he just has to play it cool because if he finishes up the front he'll probably end up winning it," said Reynolds.

"We're just worrying about our own championship at the minute and trying to get second and a one-two for Ford."

Reynolds is having by far his best season since joining the championship full-time in 2009, but is also emerging as the leading out of contract driver not to have a confirmed drive for 2016.

But he made it clear his strong recent performances were not related to having to show off his skills for teams looking for a driver for 2016.

"Every time you roll out of pitlane you want to be first. Doesn't matter - I'm always on show every time I leave the lane and the back-end stuff can take care of itself next week.

"I'm always inspired to drive. It doesn't matter if it's the start of the year or the end of the year, every time you leave pitlane you give it 100 per cent."

Reynolds also drew strong support from Canto, who has shared the Bottle-O car with him since 2012.

"There's a lot of guys who deserve to be out there but Davey's doing a great job," said Canto. "He always has and look at his qualifying performance, he's third in the championship, and closed the gap to Craig then.

"His results speak for themselves, he's doing the best he can and I think he's doing a bloody great job."

While Reynolds was assigning the championship to Winterbottom, Lowndes was insisting he was still in with a shot, despite forecasting after his Supercheap Auto Bathurst 1000 triumph that the Falcons would most likely reassert themselves on the Gold Coast street circuit.

"At the end of the day we just need to keep pressing on. Dave's closed to us, we've both closed to Mark, it's not hard to realise what the maths are.

"We'll keep going the way we are. This is probably the first race Frosty's really struggled in the sense of mechanical issues and everything else.