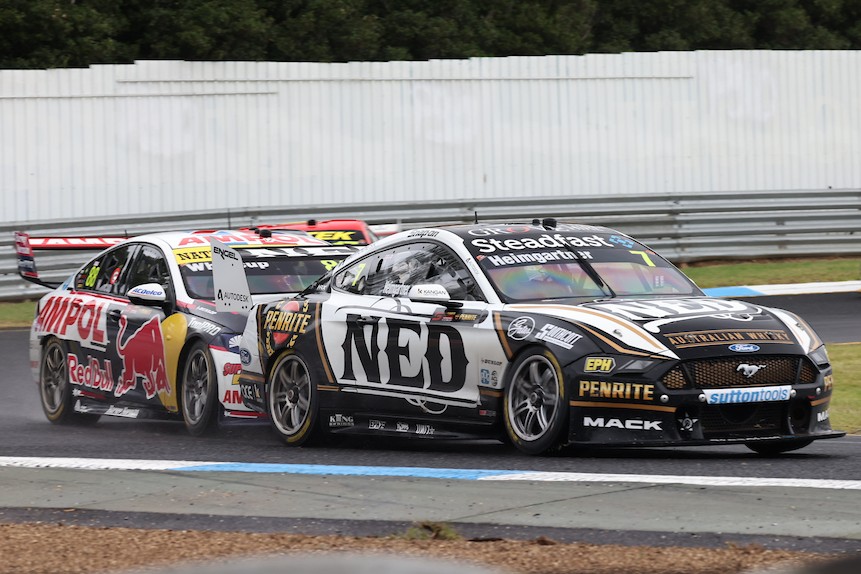 Andre Heimgartner has admitted his disappointment in missing the Race 4 podium at Sandown after running third in the dying laps.

The Kiwi held the final spot on the podium heading into the penultimate lap before a dive from Chaz Mostert forced Heimgartner’s hand.

The manoeuvre enabled Jamie Whincup to clinch third, with Heimgartner bundled to fifth behind Mostert by race’s end.

Through all his speed, Heimgartner finished where he started the 36-lap race.

“I’m pretty disappointed I finished fifth in that one after we were coming third,” the NED Whisky Mustang pilot said.

“The car’s pretty speedy. The podium got away.

“I went as deep as I could into [Turn] 1, and when I knew Chaz was coming up the inside, I knew he was going to be pushing it to get around the corner.

“Unfortunately I got pushed wide onto all of the grass and stuff that had been fed to the right, and that gave up the spot to Whincup as well.”

Heimgartner said he accepted Mostert’s apology, with the Walkinshaw Andretti United driver going down to the KGR garages after the race.

In admitting he should have defended better from a rampant Mostert, Heimgartner was adamant a podium was up for grabs.

“Pretty disappointing; it’s not entirely his fault, but it’s just one of those racing things,” said Heimgartner, who will start Race 5 from fifth.

“I was more annoyed we weren't able to get that trophy. The guys did a fantastic pit stop, the NED car was really fast in that race.

“A little bit more red mist straight after that happened.

“It’s all part of it, I would’ve done the same thing.

“In hindsight, I probably could’ve blocked a bit more, but I wasn’t thinking he’d go up the inside due to the inside being so wet and dirty.”

Heimgartner remains in the top 10 in the championship heading into the Sandown finale, which will commence at 4:30pm AEDT on Sunday. Tickets are on sale now.