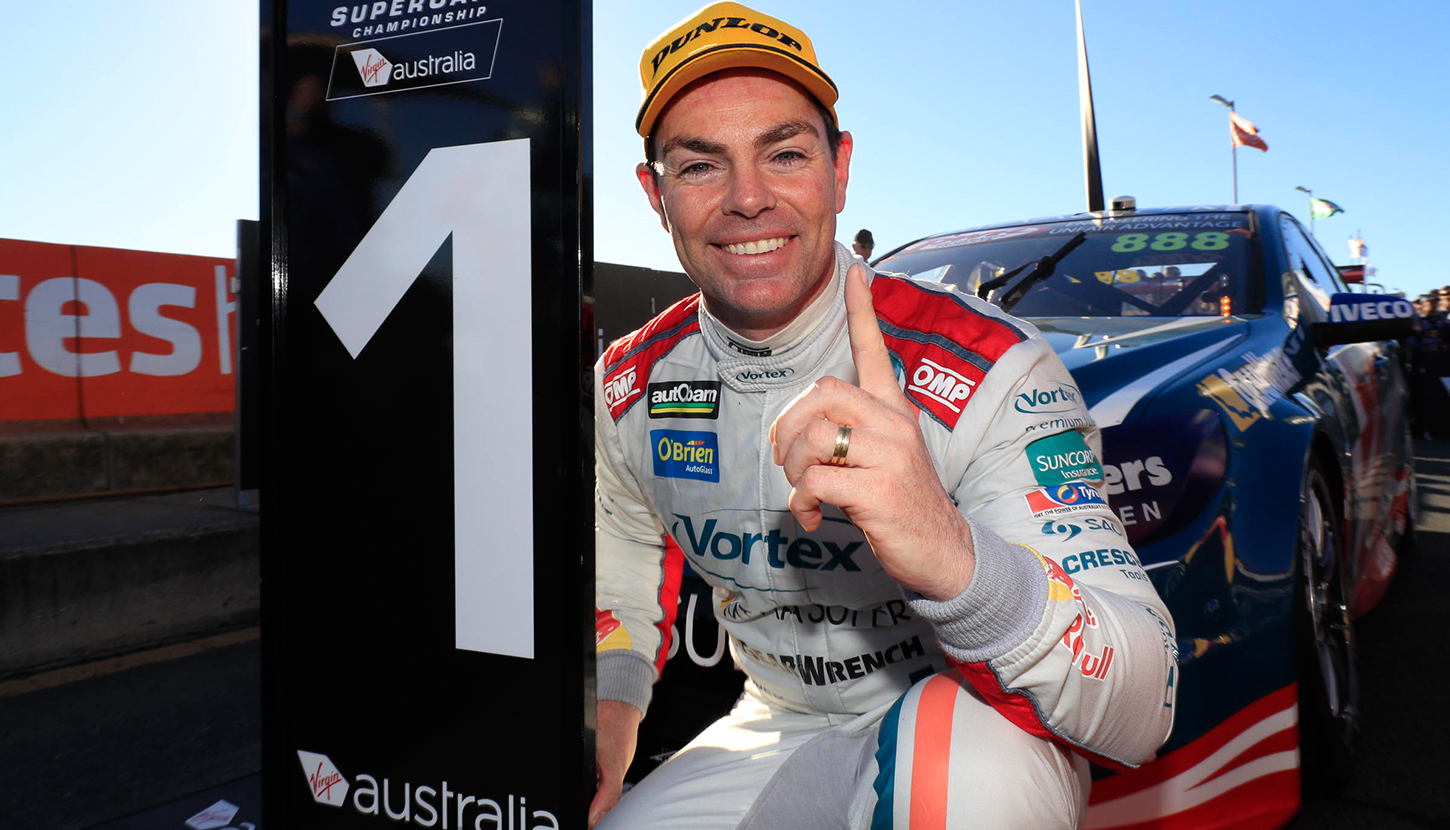 It was here in 1996 he made his winning debut as a full-time Holden Racing Team driver, the team with which he became a household name and won three championships in the opening phase of his career.

And it was here in 2005 that he scored the first win in this country for Roland Dane and Triple Eight Race Engineering, the owner and team with which he re-birthed his career after several years in the wilderness.

Lowndes is now 42 and the second oldest full-time driver in the category, so being the first to achieve 600 starts here at SMSP is symbolic of the arc of his career from rookie, to star, to veteran.

But it isn’t that simple either. Lowndes isn’t at SMSP this weekend as an elder statesman on a farewell tour. He is still astonishingly competitive and committed and undoubtedly a potential championship winner … 17 years on from when he last took the crown.

Now situated happily in his own little satellite TeamVortex operation, Lowndes and his wily and unorthodox engineer Ludo Lacroix are doing their own winning thing while next door at Red Bull, young bulls Jamie Whincup and Shane van Gisbergen fight it out in the spotlight.

It’s almost presidential the way Lowndes can stay above the fracas, able to leave behind the conflicts and tensions that come with having a hugely competitive and talented team-mate like Whincup parked across the garage.

Mind you Lowndes does owe Whincup a debt of gratitude, which might sound odd considering the championship score read 6-0 Whincup’s way when they raced alongside each other.

But Whincup’s immense focus on the job forced Lowndes to keep lifting his game; work harder on his fitness, on his qualifying, his race craft, his data analysis.

That improvement has helped him endure. Lowndes has immense natural ability, but so have plenty of other drivers who unlike him have been unable to survive and prosper in the white heat of Australian touring car competition.

There is a certain irony in the fact that Lowndes led a whole new generation of young drivers on to the grid, yet he has now outlasted almost all of them and is better than most of the next generation too.

Recognising the need to constantly progress is a sign of an intelligence that sometimes isn’t obviously appreciated because of Lowndes’ relaxed and friendly nature.

He learned a lot through the tough years of his failed European bid, the breakdown of his relationship with Holden and the Walkinshaw Group, that horror period early in his Ford career when he raced for three teams in four years.

As many leading sporting people do, he has also built a small but very important group of confidantes around him, people whose advice he trusts and he knows have his best interest at heart.

Talk to some of those people and they will tell you that there are layers to Lowndes, but even when you peel them back that sunny personality we see in public is there in private too. Maybe not always, even he has his bad days, but far more often than not.

Most drivers have learned to slip on the ‘happy mask’ when dealing with punters, corporate appearances and the media, but it comes naturally to Lowndes. Considering the demands on his time – partially brought on by his position as by far the most commercially salable Supercar driver – that must make life easier.

There’s no doubt that positive personality has been at the core of Lowndes’ ongoing and outstanding popularity. Supercars CEO James Warburton calls him the “modern day Peter Brock” and he’s right in the sense that they connect better with fans than any driver of their generation and they are inextricably linked with the Bathurst 1000, the Australian motor race that penetrates the mass consciousness above all others.

But while Brock was a wild and handsome boy who morphed into a wisened philosopher, Lowndes has evolved and improved yet remained fundamentally familiar through more than 20 years in the public eye; a smile, a thumbs up and a permanently unsated appetite for racing and winning.

Don’t bet against us being back here at SMSP celebrating another Lowndes milestone years from now.

Courtney breaks through at home

Mostert breaks his own record