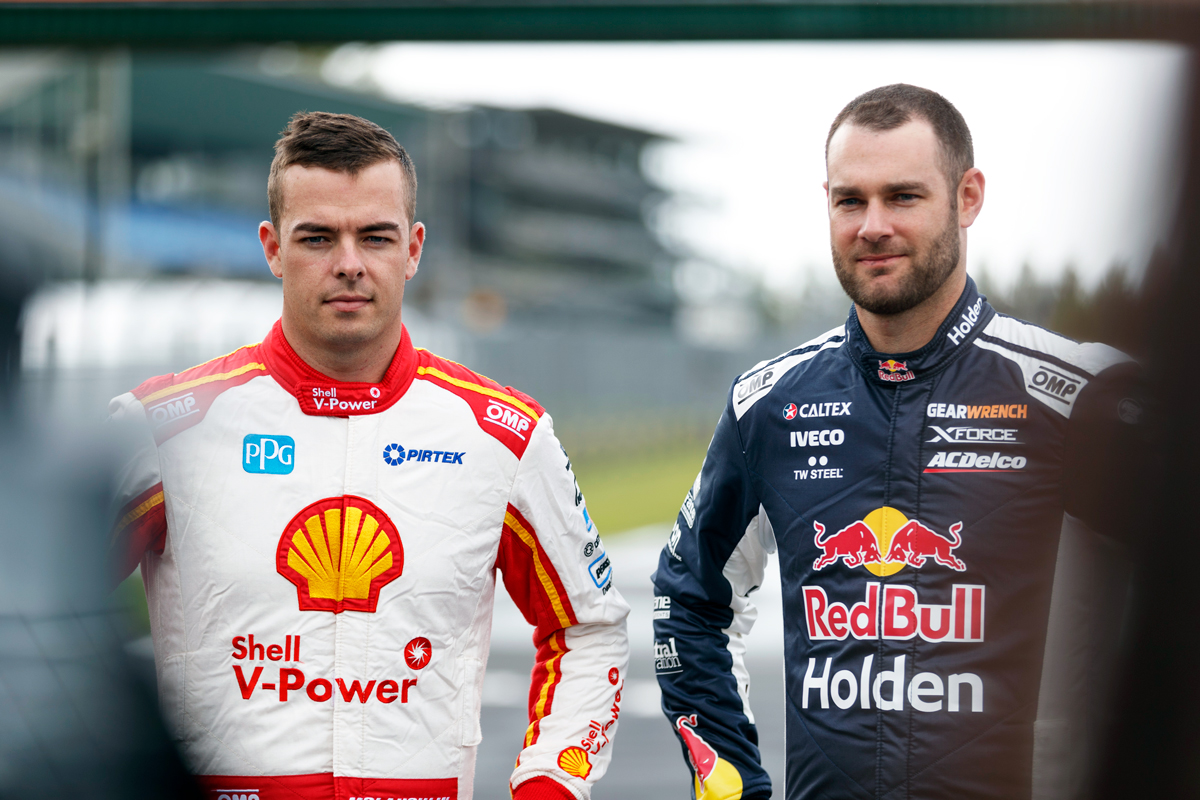 After more than 2,000 laps and nearly 7,000km of racing across 16 events and spanning 267 calendar days, we have a 2018 Virgin Australia Supercars Champion.

He emerged on top from a fierce fight with fellow Kiwi Shane van Gisbergen, from the Red Bull Holden Racing Team.

Their battle raged through the second half of the season, after van Gisbergen regrouped from an up-and-down start – compared to McLaughlin at least.

Both drivers spent time atop the standings in the closing months, and after the Saturday race of the Pukekohe event were split by just two points.

McLaughlin's final margin of 71 points belies how closely-matched they were.

But where was the championship won? Supercars.com picks out the 10 key moments. 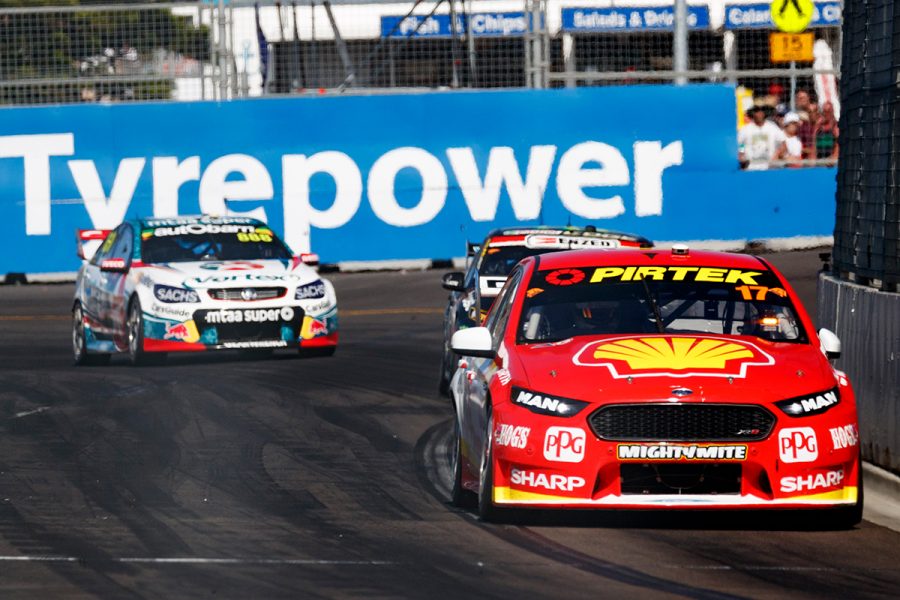 There's no way to talk about 2018 without first looking at what happened in Newcastle last November.

The Ford driver even said on the eve of the 2018 decider that he still hadn't watched that Sunday race, in which he incurred three penalties and lost the fight.

What McLaughlin did do, crucially, was learn from his experience. Race drivers continue to mature anyway and it's easy to overlook that he was just 24 at the time.

Similarly, the team and driver sharpened their procedures – including key details like radio communication – entering their second campaign.

Behind the scenes, and unsaid until it was all run and won, McLaughlin also started working with high-performance mind coach Emma Murray on his own approach. 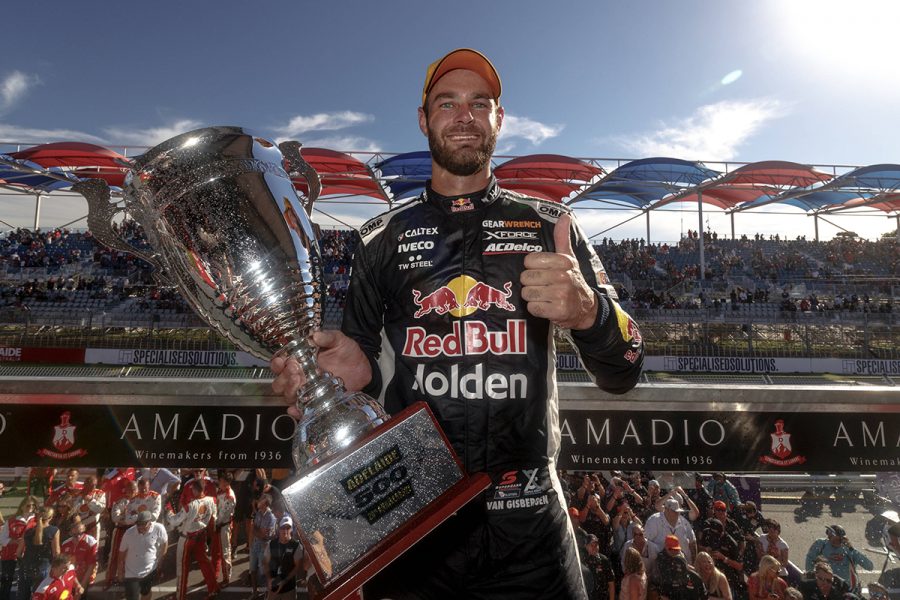 When van Gisbergen rocked up to Adelaide in 2017 as the defending champion and won both races, the odds on back-to-back crowns shortened.

A title bid never really got going, but like McLaughlin lessons were taken from that 2017; namely that van Gisbergen and Triple Eight could ill afford a similar number of mistakes.

His Sunday victory was aided by race leader Whincup suffering a gearbox failure, it should be noted.

McLaughlin grabbed a third and then a 10th, the latter due to a mid-race puncture, but all the talk was about Holden's new Triple Eight-developed package.

Its use of composite panels prompted Ford teams to push through their own lightweight bonnet and roof in time for the very next event, Albert Park. 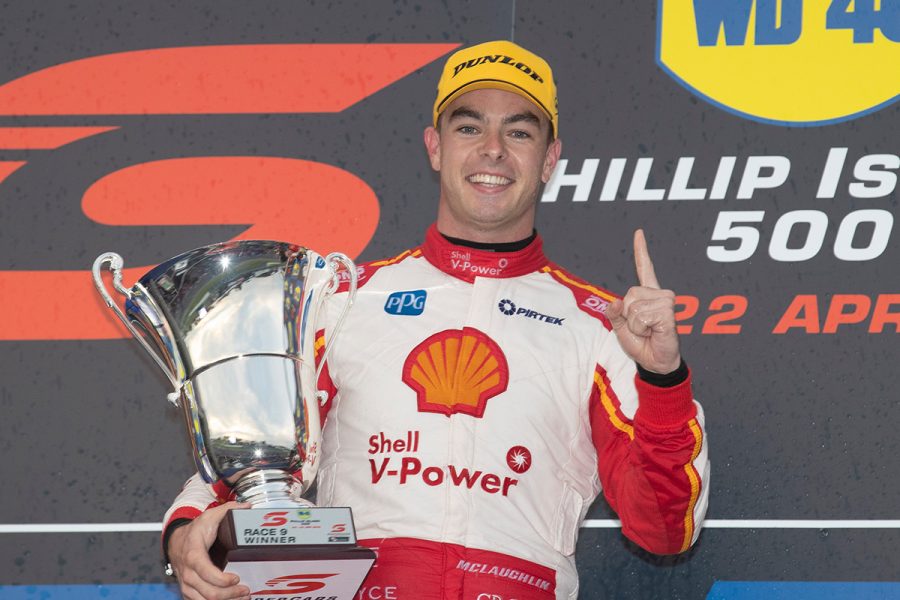 Triple Eight's dominance of the Symmons Plains weekend even prompted suggestions the new Holden would be unstoppable around the fast and flowing Phillip Island.

McLaughlin, though, was the class of the field, winning both races from pole.

Near-identical Turn 2 passes on Whincup on Saturday and Reynolds on Sunday were a particular highlight, as he moved into the championship lead.

Van Gisbergen was navigating a tricky patch. A pair of lowly grid positions at Albert Park were followed by mechanical problems on the Sundays at Symmons and then Phillip Island.

While throttle overrun left him 25th in Tassie, he salvaged sixth on the other side of Bass Strait with intermittent power steering to go with a third on the Saturday. 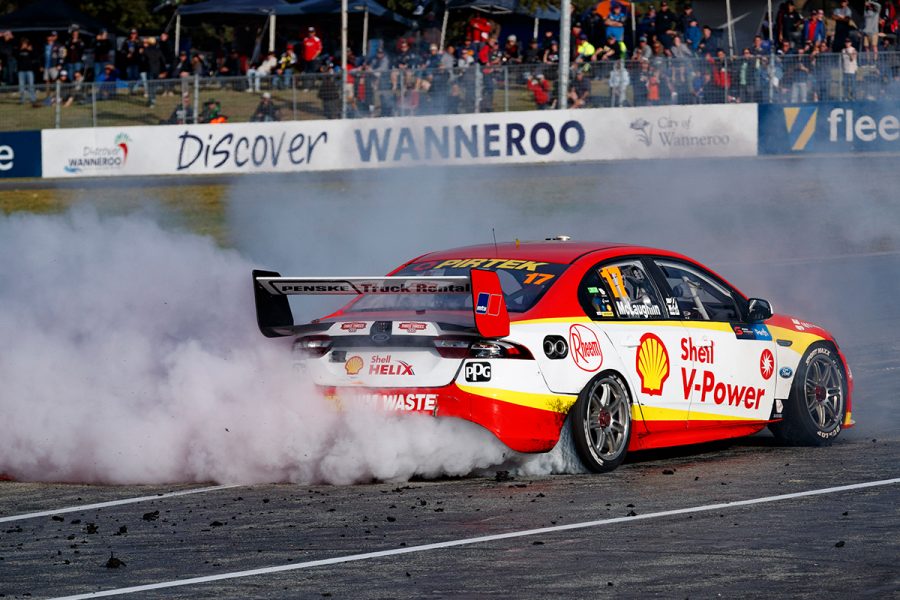 McLaughlin makes it four, from 19th

McLaughlin carried his imposing form across the Nullarbor, taking another double at Barbagallo Raceway.

His Saturday victory was largely routine, from another pole, but he did it the hard way on Sunday after getting it wrong in qualifying.

That left McLaughlin in 19th, but he carved his way through the field – with strategy playing its role as well – to make it four wins in a row.

Van Gisbergen raced from 12th to third on the Saturday, but a costly double-stack amid radio problems left him playing catch up 24 hours later.

An aggressive four-stop strategy ultimately helped him get back from 18th to fifth. 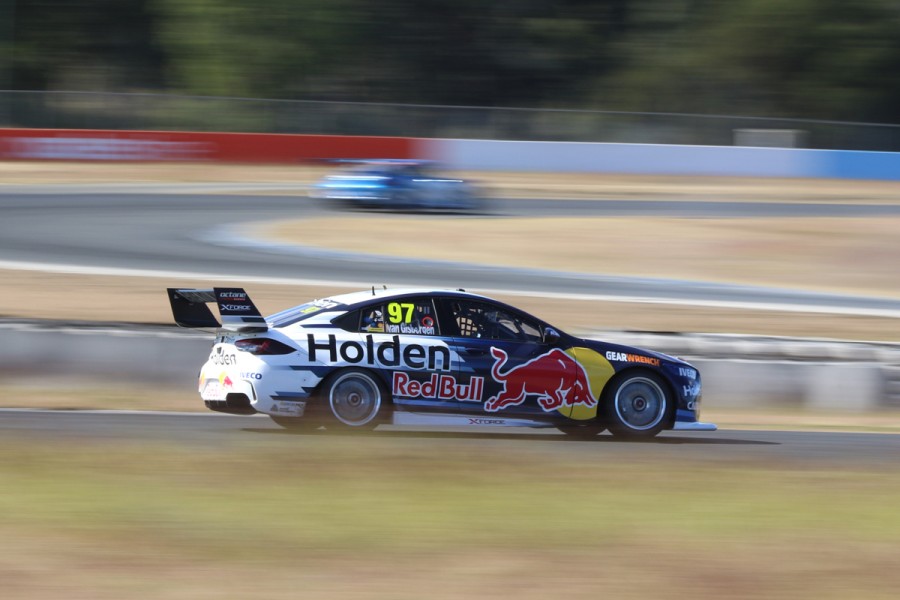 Test gets Triple Eight back on track

Van Gisbergen trimmed McLaughlin's points lead across the Winton weekend with a pair of podiums, after the latter lost a likely win on Saturday with a late off.

But while McLaughlin started on pole each day, van Gisbergen had to bustle his way to the podium from 14th and seventh.

Triple Eight and its drivers were largely happy with the race pace of its new ZB, barring the un-T8-like mechanical gremlins that had sprung up.

Its qualifying pace, though, was erratic.

After 14 races, McLaughlin's average grid position was 3.5, against van Gisbergen's 6.9, with the importance of qualifying difficult to overstate.

Triple Eight finally got a chance tackle that with its first in-season test day on June 4, arriving with a to-do list that had only been growing.

While it was out of the spotlight, the factory Holden squad's work that day paid off. 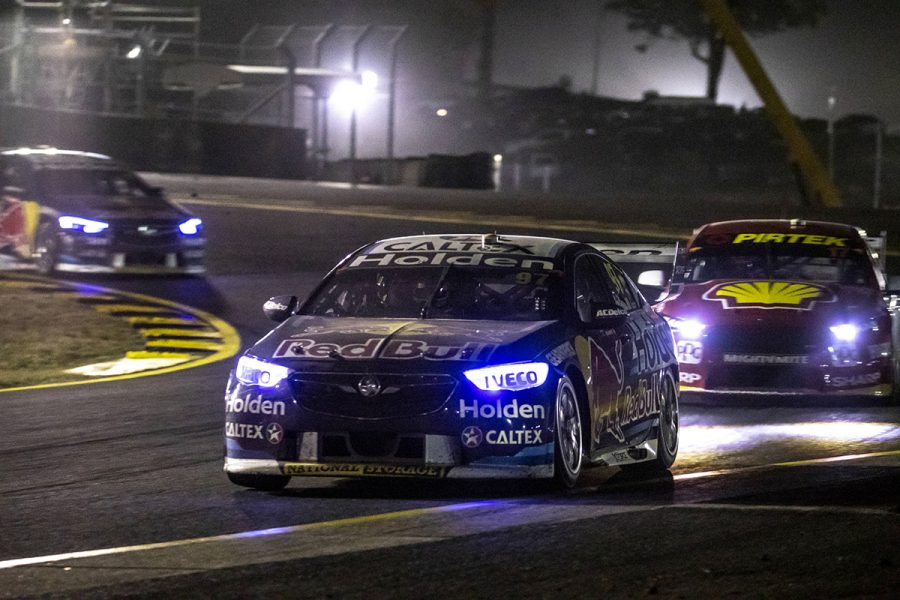 Triple Eight didn't get back on the winners' list the next time out at Hidden Valley, but it did dominate the Townsville event that followed.

Van Gisbergen ended a three-month winless streak there, and any thoughts that it was a street-circuit-specific result were quashed at Queensland Raceway.

There, van Gisbergen and McLaughlin split the victories, and asserted themselves as the two men set to fight it out for the 2018 crown.

The gap at the top was 131 points in McLaughlin's favour heading to Sydney, with third-placed Reynolds a further 320 behind van Gisbergen.

McLaughlin was in the box seat in the maiden SuperNight race, having got back ahead of Lowndes by the time the strategies played out.

Van Gisbergen and Whincup had, meanwhile, delayed their final stops and were ultimately rewarded with a Safety Car period under which to make them.

It brought them back into the game with four-lap fresher tyres for the restart with 15 laps remaining.

Van Gisbergen jumped Lowndes with his stop, then took it to McLaughlin in a pearler of a battle, ultimately getting past with 10 laps remaining.

Whincup then also overtook McLaughlin, to bring the his team-mate back to within 100 points of the leader. 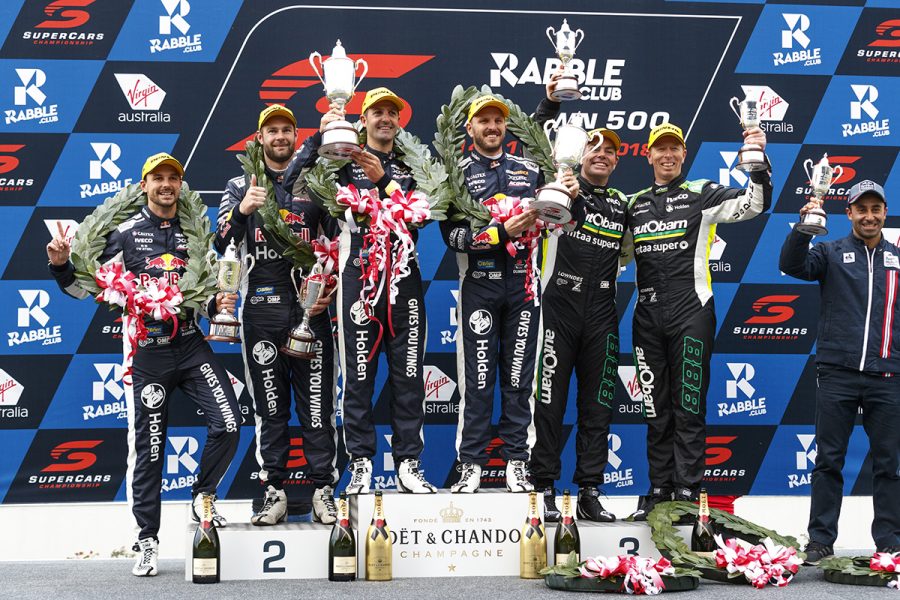 McLaughlin's late position drop in Sydney was a low-level setback compared to what was to follow at Tailem Bend and Sandown.

The Bend event was the first time in McLaughlin's DJR Team Penske career that his Falcon was genuinely uncompetitive.

He had to settle for sixth and 10th, while van Gisbergen took a first and a second and the championship lead he'd last held in April.

The Shell Ford squad was, though confident the weekend was an aberration, that struggling to get the harder-compound tyres to work on the new circuit was a one-off.

The looming enduros offered a 'reset', but there was more frustration.

McLaughlin had to settle for fourth, 25 seconds behind the race-winning Red Bull Holden, his Falcon's fastest race lap only 10th among the field.

With the result, van Gisbergen held a 55-point championship lead and all of the momentum, his new co-driver Bamber also showing he was more than a safe set of hands.

In other garages, there were longer faces, frustration and mumblings about parity. 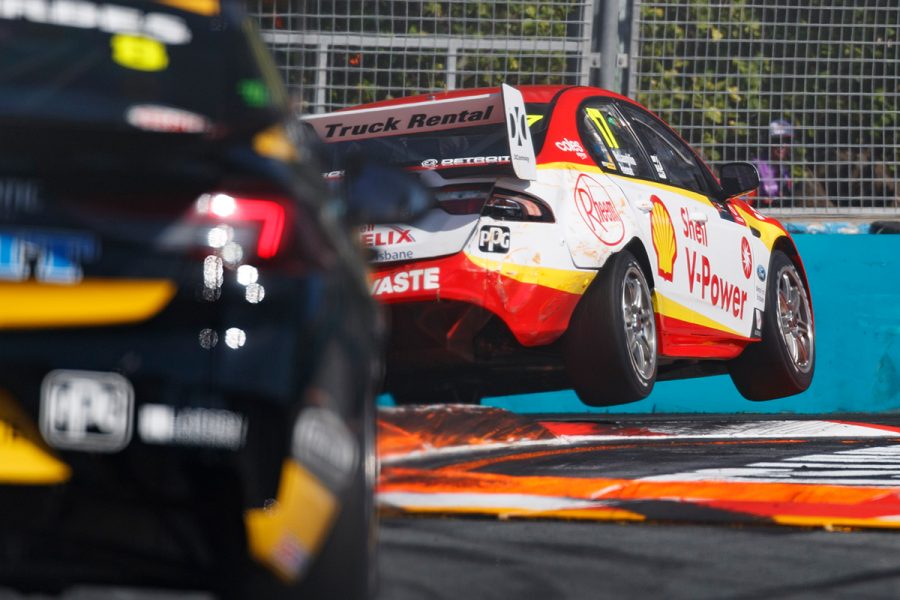 McLaughlin gets back on top

McLaughlin trimmed the gap back to 19 points at Bathurst, with third alongside Alex Premat to fifth for van Gisbergen and Bamber.

The Gold Coast event started with a tangle between Premat and Dumbrell, from which the #17 Ford was fortunate to escape relatively unharmed.

Dumbrell, though, would inadvertently play a major role in the championship changing hands.

With the bulk of the field double-stacking during early Safety Car pitstops, Dumbrell had Bamber waiting behind and then stalled.

He then clouted into James Moffat in the Supercheap Falcon in a frenzied attempt to get away.

Already delayed, Bamber was also ultimately deemed to have been released unsafely, into the path of Garry Jacobson in the Castrol Nissan, which had to prop.

Both Red Bull cars served drive-through penalties and fell to 21st and 22nd.

Crucially, DJRTP sacrificed Fabian Coulthard and Tony D'Alberto during the first stops, short-filling the sister Ford so McLaughlin would not have to double-stack.

With a fifth-place finish, McLaughlin reclaimed the top spot, by 14 points before Sunday's washout. 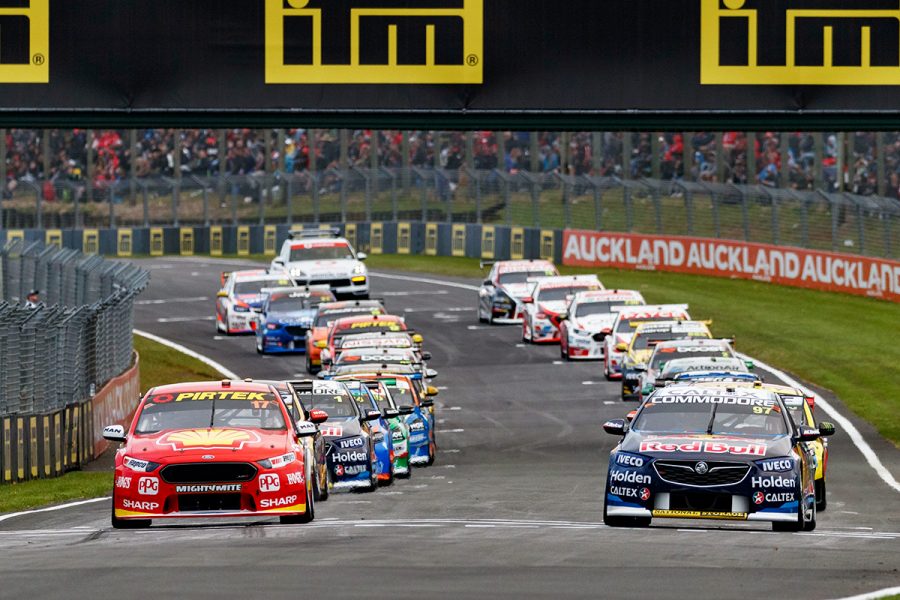 Things heat up on home soil

McLaughlin and van Gisbergen went the long way to arriving and leaving their home event at Pukekohe with the same, 14-point gap at the top.

In chronological order, van Gisbergen passed McLaughlin twice in Saturday's race to win despite a five-second time penalty for the second move.

He then managed to park McLaughlin in when they arrived in parc ferme, and was the subject of a post-race investigation into spinning rear wheels at a pitstop.

McLaughlin then ended a winless run that stretched back to Queensland Raceway in July in the Sunday race, in a fine drive to beat Whincup, who let van Gisbergen past on the final lap.

That restored McLaughlin's pre-event points lead, in a weekend of high-drama, controversy and emotion, the pair's every move watched by a boisterous New Zealand crowd.

By now, both camps knew any mistake could decide the title.

They cleared that home-event hurdle successfully, and could turn their attention to the finale. 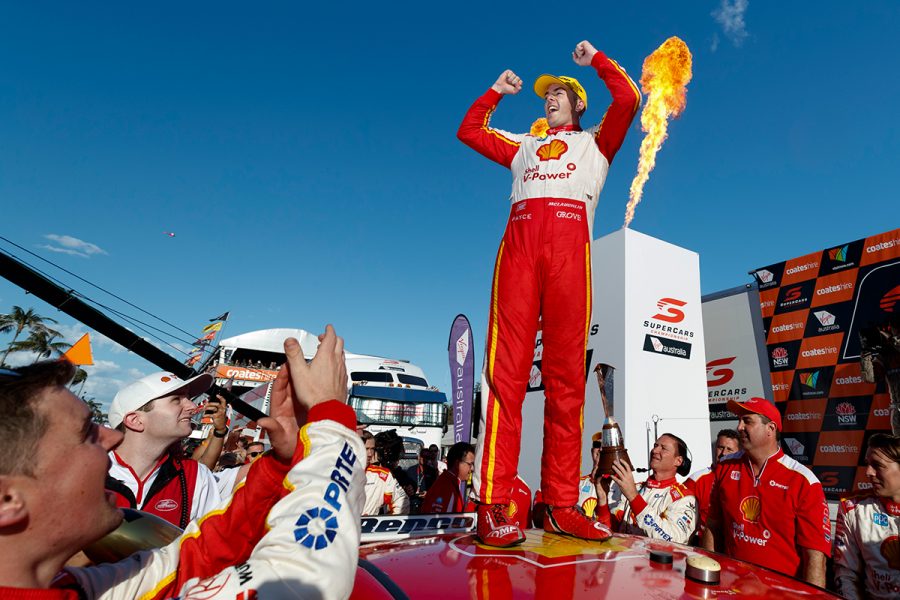 More drama and a champion

Somehow, the drama of the whole New Zealand weekend was crammed into a 24-hour window between midday Saturday and Sunday in Newcastle.

Both protagonists fell behind their team-mates at the start but were back into first – van Gisbergen – and third – McLaughlin – by the end of Saturday's opening lap.

McLaughlin got in front, with van Gisbergen pitting on consecutive laps to complete his mandatory 140-litre fuel drop.

Ryan Story boasted on TV that McLaughlin could make it home on his fuel load, and he led the second half of the race.

What became apparent, though, was that McLaughlin was having to save more and more fuel as the laps ticked on, as van Gisbergen closed in from nearly 10s behind.

On the final lap, van Gisbergen swooped to take the lead as McLaughlin finally ran out, two corners from home.

That result – van Gisbergen first and McLaughlin second – would have meant the pair started Sunday with McLaughlin just two points ahead.

Like Pukekohe, however, a van Gisbergen pitstop had attracted the scrutiny of stewards, this time for the fuel hose being connected as the Commodore was lowered.

That time penalty dropped van Gisbergen to fifth in Saturday's result and 53 points behind, and took some sting out of the day.

It meant McLaughlin only had to finish sixth on Sunday but everybody, the driver included, knew what had unfolded 12 months earlier.

There was no repeat of that, though, and van Gisbergen ultimately had a quiet race, stuck in traffic and then hindered by tyre pick-up.

McLaughlin relinquished the win to Reynolds late, rather than getting stuck in a battle, but still beat his chief rival on track.

The final, 71-point gap doesn't indicate how hard the title was to win, and how closely-matched the two were through the second half of the campaign.

But that won't matter to the newly-crowned – and immensely deserving – 2018 champion.