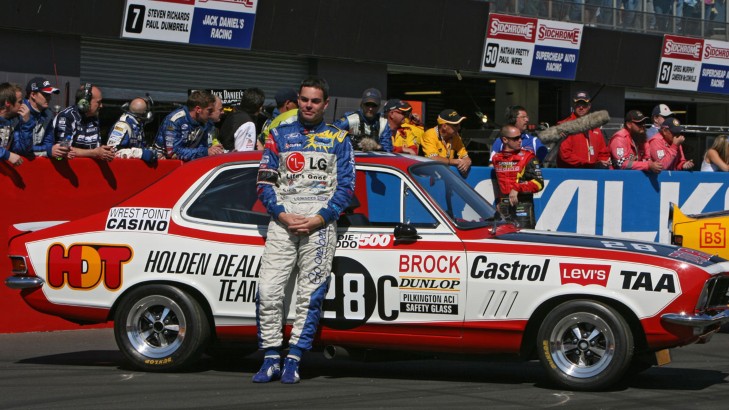 Craig Lowndes is the closest any racer has come to emulating Peter Brock, according to Brock’s long-time partner Bev Brock.

With Lowndes set to line up for his 600th Supercars race at Sydney Motorsport Park, Bev explained how Lowndes modelled himself on Brock and why he has become the sport’s most recognised and popular figure today.

With the personality to match his talent, Lowndes was Brock’s protégé and friend since his debut in the early 1990s. He won the first ever Peter Brock Trophy in 2006 in an emotional and fitting scene, and could yet equal or surpass Brock’s record nine wins at Mount Panorama after taking his sixth victory last year.

“Craig is incredible, he’s very much the one in Peter’s mould – they were close and talked and communicated exceptionally well,” Bev told supercars.com.

“Craig’s the one who listened when Peter handed out advice on being more than just a motor racer.

“It’s more than having that ability, it’s engaging the public, stepping outside the confines of motorsport, being relevant to the broader community. And Craig does all that, which is fantastic.”

It’s about being someone in and out of the car.

“In terms of ability, he certainly has it,” Bev said.

“But the sport is changing so dramatically and competitiveness between the cars, it’s luck of the draw. Sometimes a minor thing can happen that bumps you back in the field. There was a time you could drive through from the back of the field and win the race – that is near an impossibility today.”

This year’s Supercheap Auto Bathurst 1000 marks the 10th anniversary of the Peter Brock Trophy, named in the nine-time Bathurst winner’s honour in 2006 after his death in a racing accident in Western Australia.

For Lowndes, the opportunity to recognise Brock and reflect on the enormity of the event is special each year.

“I think Bathurst was always an iconic race regardless of what the legacy of Peter has now,” he said.

“For me, it’s a race I grew up wanting to be part of and an event you’d hope to win one day.

“His ability to carry on the information and to help that young generation – which I was at that point – was really amazing.

“I probably wouldn’t have been able to adapt to the track as quick as I did, which we sat down, we literally talked a lap of the track and all the things that he was describing I was seeing – and that was exactly how it happened.”

So much has changed in Supercars since the early days of Lowndes’ career, particularly the approach to Bathurst. At the end of 1000km, it’s not unusual for the cars to be separated by less than a second – 2010’s 0.1733sec margin from winners Craig Lowndes/Mark Skaife to Jamie Whincup/Steve Owen is the second closest in history, followed by 2010, ’11, ’12 and ’13 (The closest was the 1977 form finish, Moffat/Ickx to Bond/Hamilton by 0.1sec).

“It’s great to talk to Bev about the history and everything else and how they used to nurture the cars through that first two thirds of the race,” Lowndes said.

“Now the cars are mechanically strong, they’re reliable – we get the chance to run them hard and fast from the green light to the chequered flag…