Of its five wins, the first for Kelly brothers, who will leave the championship at the end of the season, will remain the most special.

At a rain-soaked Hamilton Street Circuit on April 16, 2011, Kelly Racing claimed its breakthrough win in the Supercars Championship.

It marked Rick Kelly’s first victory since Oran Park in 2008, and a significant moment for the Braeside-based team in its third season.

Older brother and teammate Todd Kelly made it a one-three result for Kelly Racing in New Zealand, holding off a late charge from Mark Winterbottom to finish on the podium.

Qualifying on the second row for the 200km-long opener, the #15 Jack Daniel’s Racing driver darted across to the inside off the start, pushing pole-sitter Jamie Whincup wide heading into Turn 1.

Steven Johnson also benefited from Kelly’s move on the championship leader, seeing the pair side-by-side through the first corner.

Locked in a drag race to Turn 2, Kelly outpaced the Dick Johnson Racing Ford to take the lead.

By lap 3, the 2006 champion was four seconds ahead of Johnson, who was coming under fire from Shane van Gisbergen.

The varying conditions caused havoc through the 59-lap event, but mostly in pit lane.

Whincup hit the wall when leaving the pits on cold tyres, while many others failed to stop on the slippery concrete surface.

Lee Holdsworth spun at the entry to pit lane, causing several drivers to take quick action to avoid a pile-up.

The Safety Car was deployed when Tim Slade slid off the circuit at high-speed and hit a tyre bundle on lap 29, seeing most of the field stop for tyres and fuel.

It proved a smart move for both the Kelly Racing brothers, who both took on enough fuel to see them to the flag.

The rain produced unpredictable conditions, with another Safety Car called late in the race to collect debris on the front straight.

With poor visibility, a common complaint throughout the field, Todd Kelly reported his single windscreen wiper had stopped working with less than 10 laps to go. 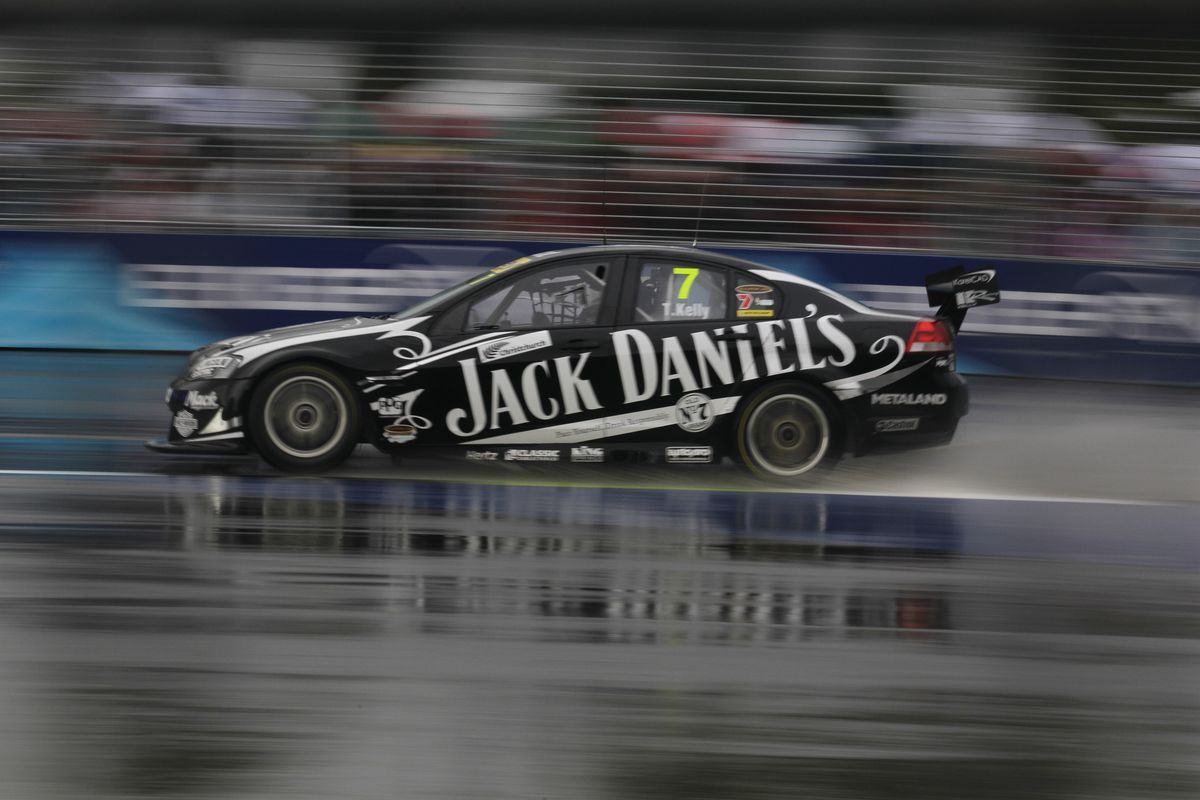 Driving blind and unable to defend against Craig Lowndes on the restart, the #7 Jack Daniel's Racing driver slipped back to third with four laps to go,

A battle ensued between race leader Kelly and Lowndes, with the former using an old chassis after his new car was damaged following an opening lap pile-up at the Australian Grand Prix less than three weeks earlier.

The sun came out for the final three laps at the Hamilton Street Circuit, causing blinding glare for the drivers at Turn 3.

A spirited exchange between third-placed Kelly and Mark Winterbottom saw the latter momentarily reach a podium position in the closing moments before Kelly forced the Falcon wide through Turn 6 to regain the place.

After his win on the Saturday, Rick Kelly backed it up on Sunday with a pole position with Todd starting next to him on the front row.

Unable to convert it to another win in New Zealand, Rick Kelly finished sixth with Todd crossing the line 15th.

Rick Kelly’s win and top 10 result catapulted him from eighth to second in the standings, 81 points behind Whincup.