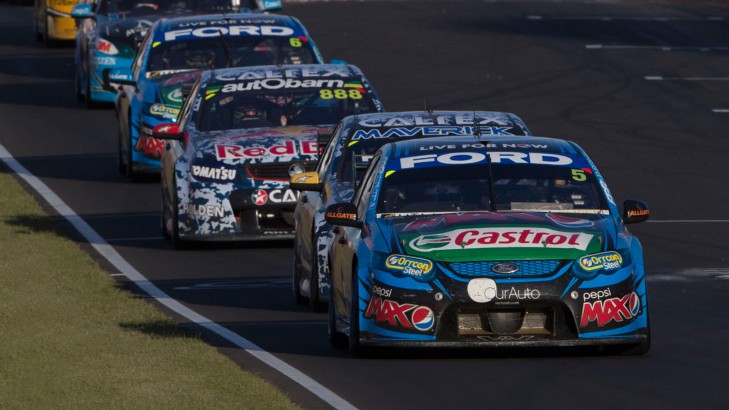 Jamie Whincup may have locked in the points he needs to secure the 2014 V8 Supercars Championship - but the battle will still be red hot for second overall at the Sydney NRMA 500 next week.

Red Bull Racing Australia has claimed 1-2 finishing positions for the past threeyears and now the team's full focus is on catapulting Craig Lowndes up to p2 in the Championship at the grand finale.

Lowndes trails Ford foe Mark Winterbottom by 95 points, with three races left to run on the treacherous Sydney streets at the December 5-7 event.

"There's still 300 points up for grab at Sydney. We've had good runs there in the past and I really looking forward to getting out there. The three-race format will be interesting to have three cracks at trying to bridge that gap."

Lowndes' second place Championship finish is the last thing for the team to tick off this season - and while Winterbottom is the main competitor, TEKNO Autosports' quick Kiwi Shane van Gisbergen is also in the race for p2, just 39 points behind Lowndes and 134 behind Winterbottom.

"The first focus was getting Jamie across the line - and he's been able to do that [at Phillip Island], which was great," Lowndes said. "It's been fantastic to put that chapter to bed.

"We've [also] got the team's Championship now, which again Roland [Dane, team boss] is happy with, and we can put that chapter to bed.

"The only chapter left obviously is the fight for second. We're in a good position, so I think it will come down to the three of us."

For Winterbottom, spoiling the Red Bull party would be a thrill, though he ultimately is unhappy with the way the year has panned out, after having a strong points lead early in the season.

"It'd be good to upset them," Winterbottom said. "[But] finishing second is a massive disappointment ... as a team 1-2 looks good but he'd have to get sick of finishing second!"

Last year the Sydney finale saw Frosty fall from third to fourth in the standings after an accident in the first race and incidents with Lowndes.

"I crashed last year - win or bin it, type thing," Winterbottom said of his charge in the 250km Saturday race.

"This year I'll have a go again I guess, see where we end up.

"But it's a long race - if you qualify nowhere you can strategise your way back. It's definitely a tough race. And who knows, I might get zero points - and we've gone there with double podiums."

The Pepsi Max pilot was concerned his Ford Falcon FG may not perform as well at street tracks - in fact, he mentioned ahead of Phillip Island the team was already looking forward to the final event to kerb issues at the style of circuit. He said the team would just need to wait and see how practice goes before making any calls on where the car would be.

"Homebush is going to be tough for us," Winterbottom said.

"But you roll out and some days you think it's going to be tough and the car just goes, so you never know.

"We're working hard, all the guys are pushing pretty hard at the workshop ... we're definitely not talking up our chances, but you don't go there thinking you can't win either.

"Homebush is always tough, whether you're in form, out of form - it's probably the hardest race of the year."

Given Winterbottom's assessment of the circuit, he knew it would be a tough ask for returning champ Marcos Ambrose to tackle the street track straight out of the box. "It'll be interesting to see how he goes," Winterbottom said.

Ambrose will complete his final test today at Queensland Raceway, before the XBOX Falcon hits the track at the December 5-7 Sydney NRMA 500.