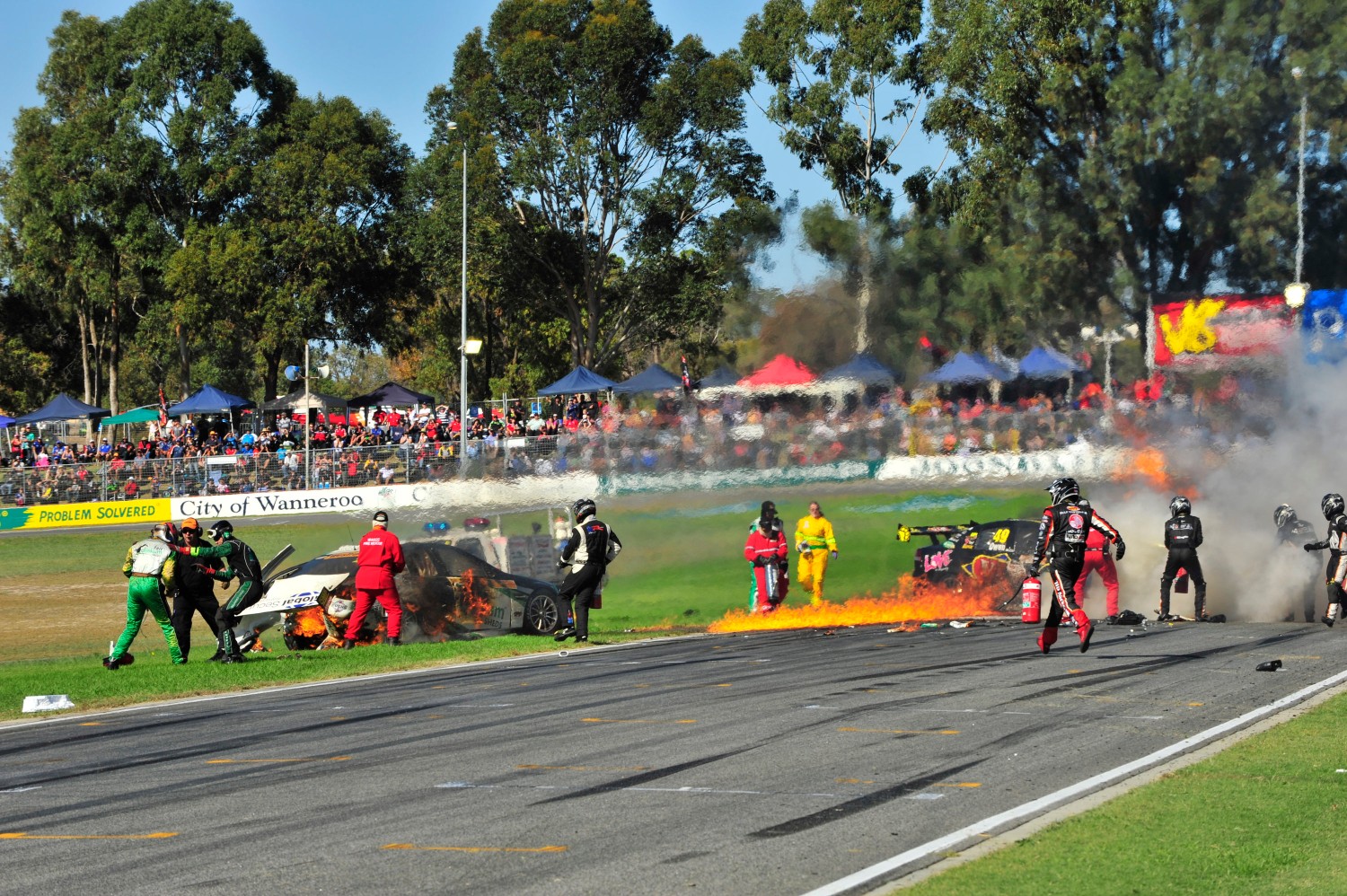 It was one of the scariest scenes seen in Australian motorsport, and 10 years on, the images of the horrific Perth fireball start-line accident still carry much weight.

On May 1, 2011, Karl Reindler and Steve Owen marked their names in infamy as the two drivers who walked away from the ferocious accident.

Wanneroo Raceway came to a standstill after Reindler, whose clutch in his Commodore failed, stalled on the grid in the second race.

His stranded car was collected by Owen, with the 37g impact instantly erupting the fuel cell of Reindler’s Commodore.

It was a bittersweet day for Brad Jones, whose team won its first race on the same day through Jason Bright.

“If you’re ever going to lose a car in a big incident like that, it probably dulls the pain if you win the race at the same time,” Jones recently told Supercars.com.

“It happened right in front of our garages. We saw it all unfold. 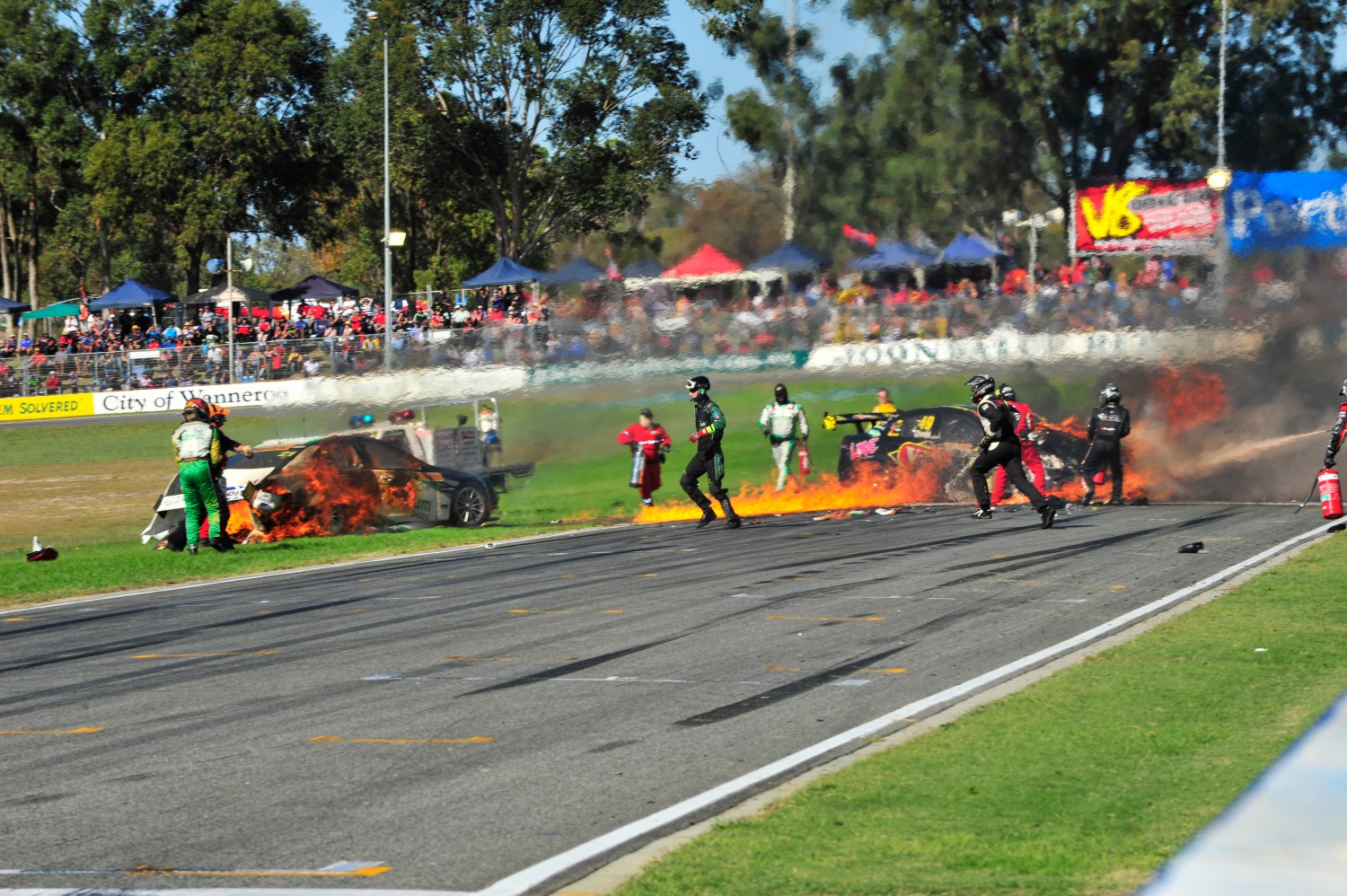 “The noise of the impact was deafening, and then the massive fire.

“It was such a relief to see Karl and Steve were okay."

The impact was such that Reindler’s car jumped into the air.

“I loaded the clutch up and it stalled,” Reindler said at the time. 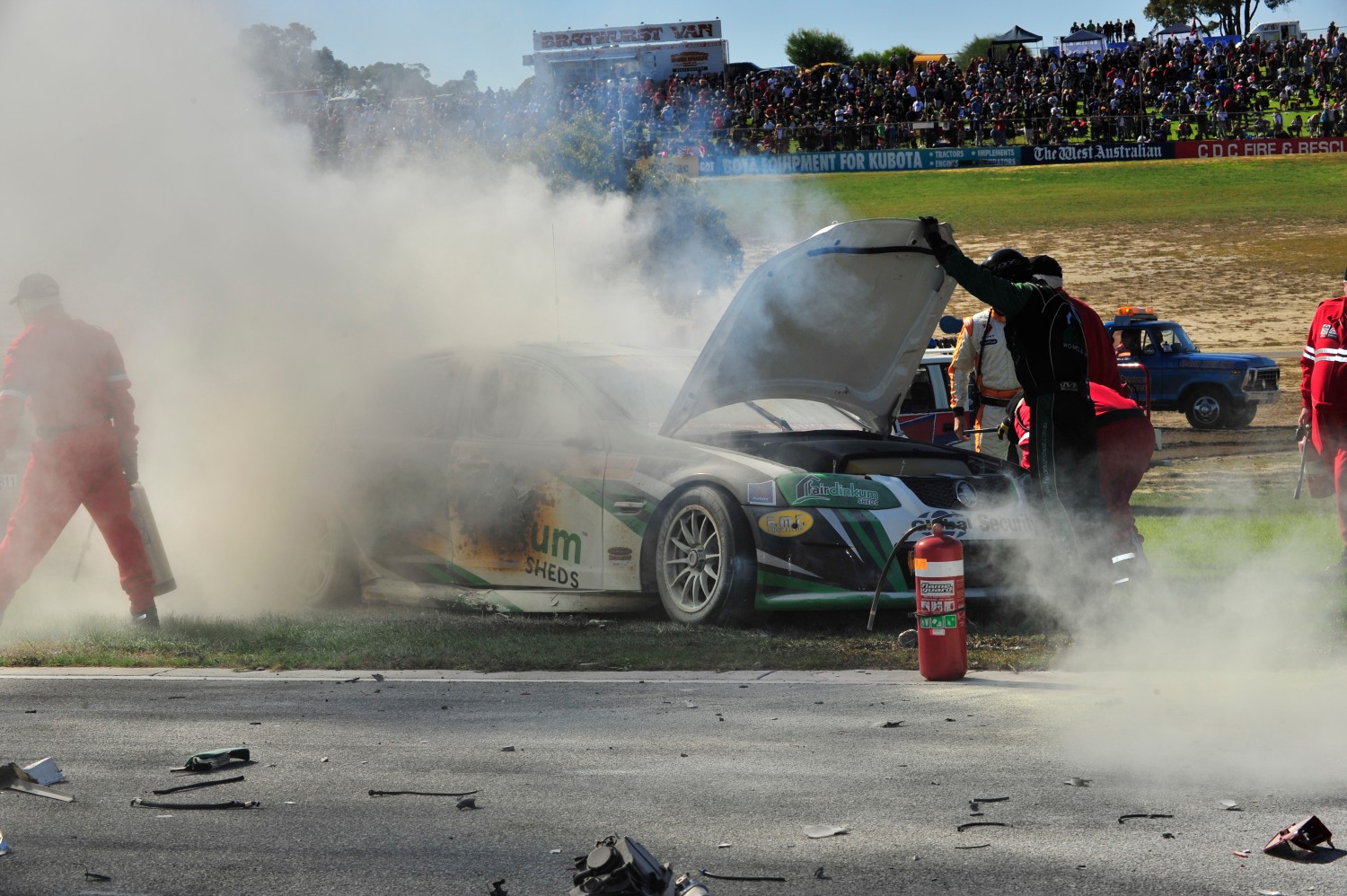 “I had my foot all the way down; I didn’t even release the clutch. I couldn’t get it going at all.

“There was nothing I could do. Before I knew it I saw flames inside the car. I guess I panicked and tried to get out as quick as I could.”

Reindler had started from 13th on the grid, with Owen launching from 25th.

The impact, with Owen unsighted at at full throttle, was registered at approximately 150km/h.

“It happened that quick I barely got on the brake by the time I hit him,” said Owen at the time.

“I was in third gear, flat out after getting a pretty good start. I opened both doors and there was fire.

"The officials were straight there and put the fire out which allowed me to get out quickly.” 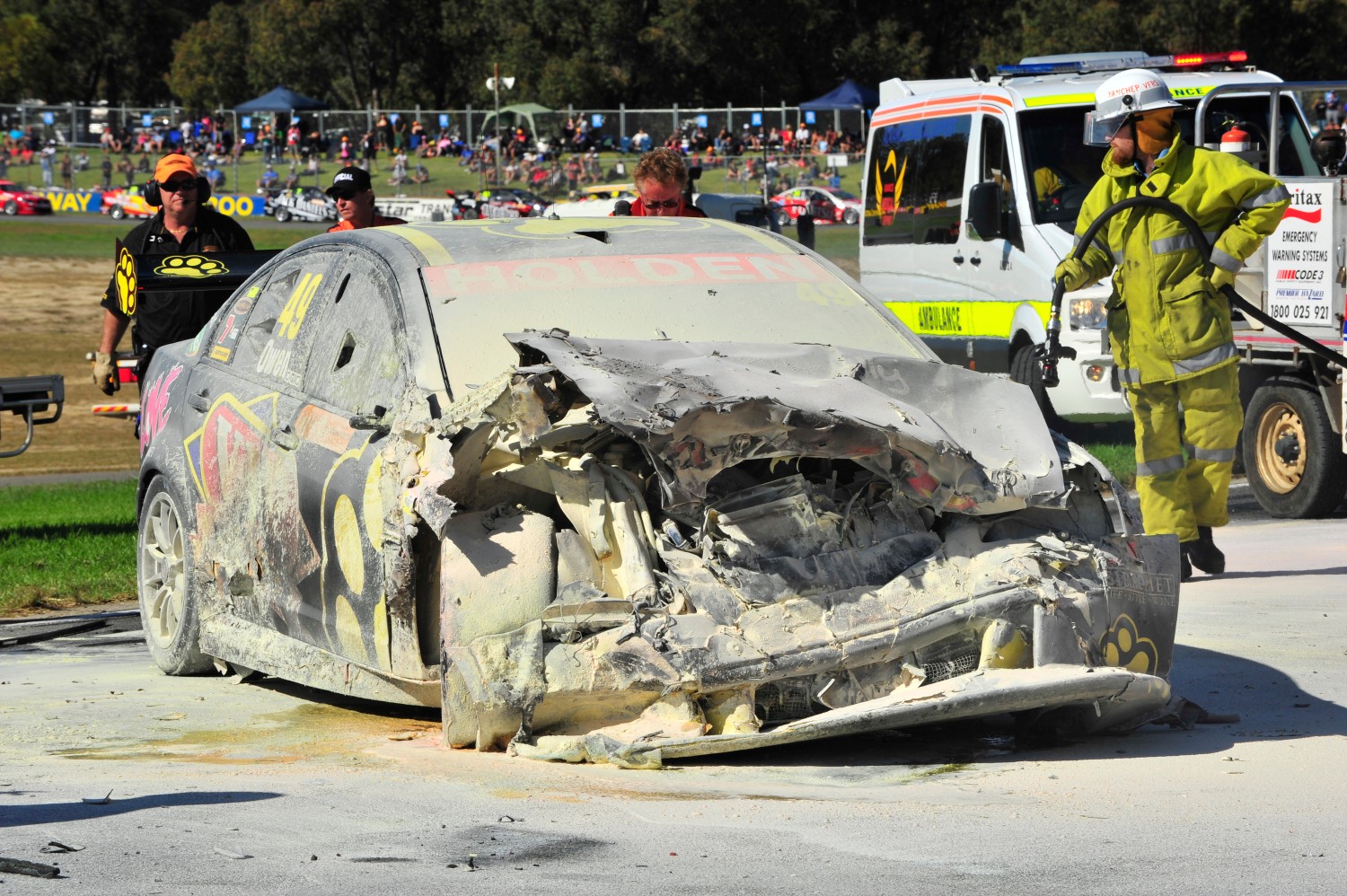 Remarkably, neither driver missed an event; Owen’s car was repaired in time for the next round at Winton.

Reindler moved into a spare chassis; after the Perth accident, the damaged chassis was stripped.

The later Car of the Future regulations, implemented in 2013, saw fuel tanks moved from the rear of the car to a more centralised position.

However, the incident itself still triggers nasty memories, even for Jones, whose team recovered to aid Bright to victory just over an hour later. 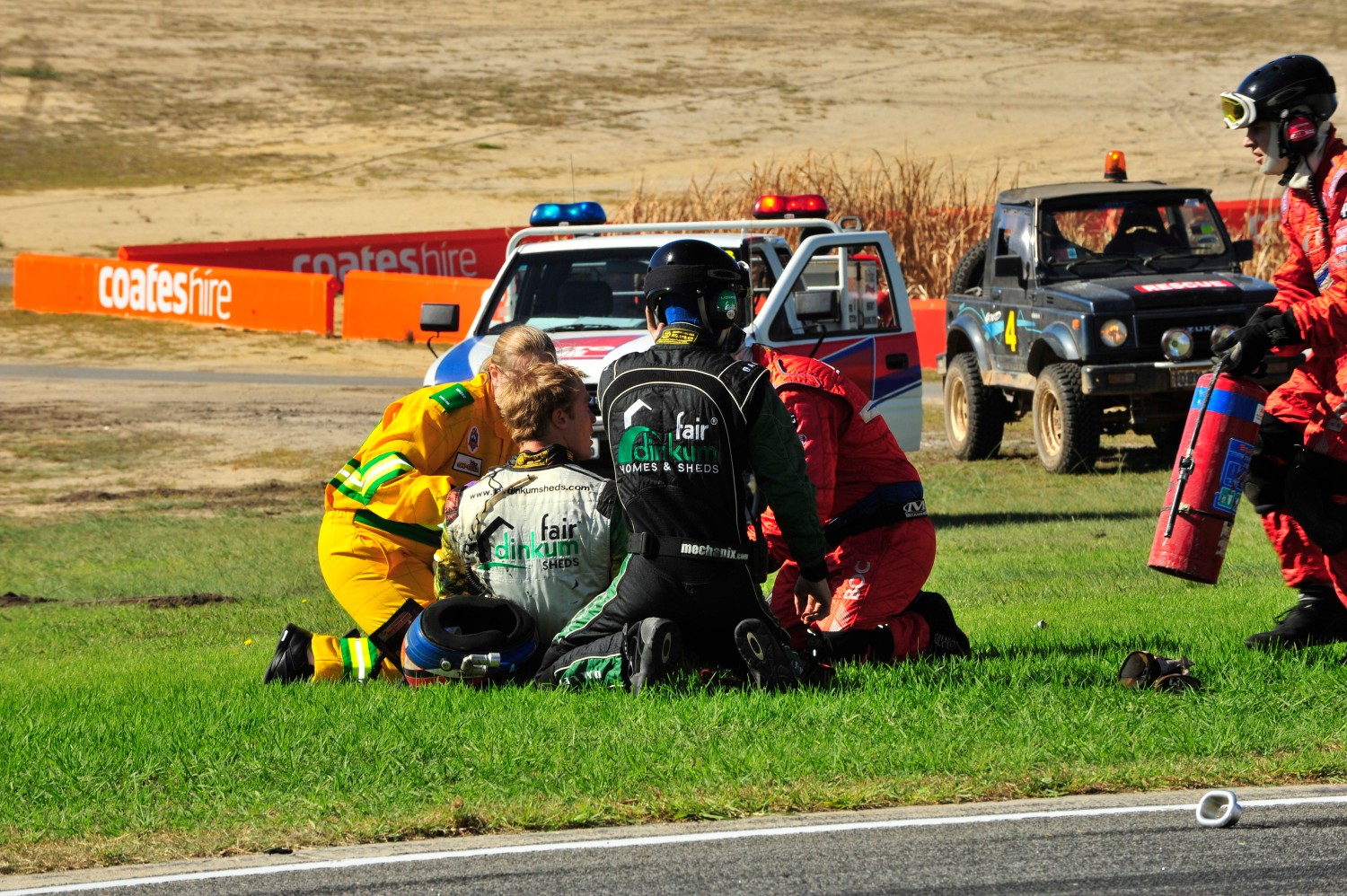 “In those days, the pit lane was on the other side; there was no catch-fencing,” Jones said.

“It’s one of those things; once everything’s cleared up and everyone’s fine, you have to focus on the race again.

“We had to put it all in the back of ours minds, and focus on the other cars.”