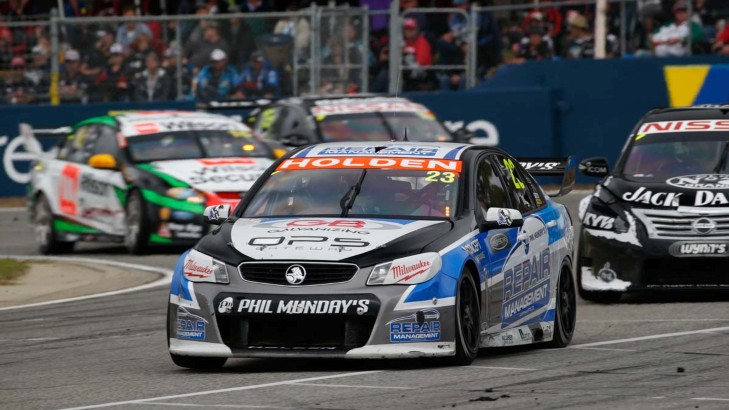 Russell Ingall has always considered qualifying one of his weaknesses - but two second row starts at the last event in Perth showed he mastered the one-lap dash at Barbagallo.

After promising race pace earlier in the year at Winton, according to the V8 Supercars veteran, it's now just a matter of putting it all together for the weekend's SKYCITY Triple Crown at Hidden Valley in Darwin - a circuit where he's had plenty of success before.

"There's definitely two aspects to it - you have to have a setup that is suitable for qualifying to get that one back, and then one for the race," Ingall told v8supercars.com.au.

"We've always been strong in race pace during the first half of the year and we've probably flipped it around - so at least we know how to get both, and we now have to incorporate the two, which I now think we can."

When Ingall signed with Lucas Dumbrell Racing for 2014 - which raised some eyebrows, given 'The Enforcer' was a big name to head to a small team with limited success - he knew there would be work to do. But that seems to have come to fruition with the Repair Manangement Australia Racing Commodore sooner than he'd first imagined.

With the tracks he enjoys coming up on the V8 Supercars calendar, Ingall feels LDM is now ready to strike.

"We've been working hard for Darwin," he promised.

"Probably one of our only weaknesses (from WA) was, we felt we were a bit down on straight-line speed.

"We are concentrating on that for the moment, and hopefully we've picked up a bit of that, so that'll help us in Darwin."

Ingall has more wins at the Hidden Valley circuit than any other driver in the field, with six to his name. Only Mark Skaife has a bigger tally with nine victories; while Red Bull duo Craig Lowndes and Jamie Whincup boast five apiece. He is also one of just three current drivers who has completed every event at the Darwin track.

And while plenty changes from year to year, Ingall doesn't dismiss the confidence past wins at a circuit can give a driver.

"For sure when you go to tracks you enjoy you always come on strong - these are some of my favourite tracks coming up, so now's the right time.

"The timing is actually perfect, we are getting things sorted with the team.

"My performance should be strong inside the car from now on so everything's starting to fit in."

He joked plans rarely came to fruition in motor racing - but at the moment, everything is on target.

"I don't think we could ask for anything more, to be honest.

"Obviously the biggest disappointment was the Winton fiasco but after that everything else has been on track ... If we keep trucking on the way we are and get to some of those better tracks - Ipswich and Gold Coast as well - I think it should be pretty much on for the rest of the year."

Team boss Lucas Dumbrell said he, along with Ingall, was proud of what the team has been able to achieve after just five Championship rounds.

"The year has been pretty good and Russell has been a big part of it - proud is a good word for it," Dumbrell told v8supercars.com.au.

"We've made progress and we still obviously have to keep that going."

As the Pirtek Enduro Cup approaches - including the Supercheap Auto Bathurst 1000, where Ingall is notoriously strong and the team recorded its best race finish last year with Scott Pye and Paul Morris behind the wheel - there's only positives to come.

But Dumbrell felt it was an injustice to say they'd come good in the second half of the season - Ingall should always be considered a threat.

"With Rusty I think we're definitely capable of getting a result in any race," he said.

"It's just about finishing off - we've had three third place qualifying sessions, which has been great, and it's just about getting the whole job done now.

"We have to get our pit stops up to spec; try to make sure the crew is holding up their end of the deal."

Can Ingall add to his tally of wins at the Hidden Valley circuit this weekend? Book your tickets now to be there in person to see who crosses the line first.

The V8 Supercars events are almost back-to-back at this time of year, with the Castrol Townsville 500 - Driven by TAFE Queensland running less than a fortnight after, from July 4-6. Tickets are available for the Northern Queensland event now as well, with grandstands providing the best view at the street circuit.

Russell Ingall  ›
15' Repair Management/Team CoolDrive ›
2014 SKYCITY Triple Crown Darwin  ›
Stay In The Know
Sign up to the Virgin Australia Supercars Championship Newsletter
We use cookies to ensure that we give you the best experience on our website. If you continue to use this site we will assume that you are happy with it.Ok