'The Enforcer' puts his foot down on litter

‘The Enforcer’ puts his foot down on litter

'The Enforcer' puts his foot down on litter 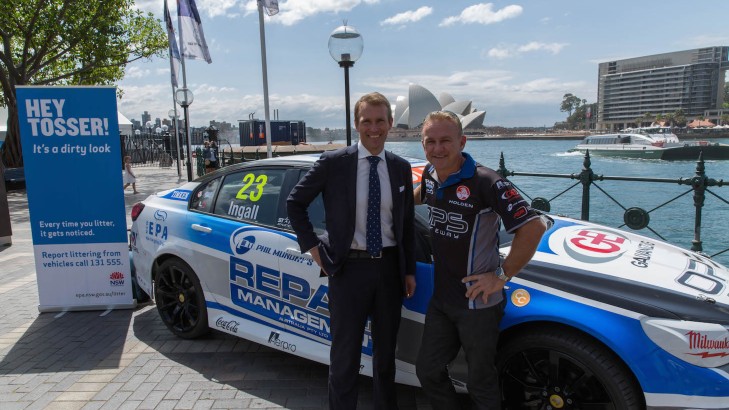 Ingall has joined forces with the NSW EPA's Hey Tosser! campaign, and didn't mince his words to racegoers.

"Nobody wants to be known as a tosser," Ingall said.

"I encourage race fans to be responsible with their rubbish over the Bathurst 1000 race weekend. Let's keep it clean on and off the track.

"I am sure our V8 fans will have a fantastic weekend. It will make it even better if they support this initiative and spread the message that littering is not acceptable."

Stokes said litter damages the environment, and could wreak havoc on your favourite race team if their car ingests littered items.

"I'm sure no race fan wants to cost their favourite team the race because they were careless with their litter.

"This anti-litter message goes beyond Bathurst, because litter is a tax on everyone. The estimated cost of dealing with litter nationally is $300-$350 million a year, and it damages our environment and degrades of our surroundings.

"The NSW EPA will have more than 30 officers around Bathurst for the four-day motorsport festival, fining people who are caught littering from their vehicles.

"Litter thrown from vehicles is a major priority for the NSW EPA. The Bathurst 1000 is a major drawcard for motorists, and EPA and council officers will be patrolling key routes to and from the racetrack."

To report littering from vehicles, call 131 555 or visit www.epa.nsw.gov.au.

The old meets the new at Mount Panorama

Russell Ingall  ›
15' Repair Management/Team CoolDrive ›
2014 Supercheap Auto Bathurst 1000  ›
Stay In The Know
Sign up to the Virgin Australia Supercars Championship Newsletter
We use cookies to ensure that we give you the best experience on our website. If you continue to use this site we will assume that you are happy with it.Ok