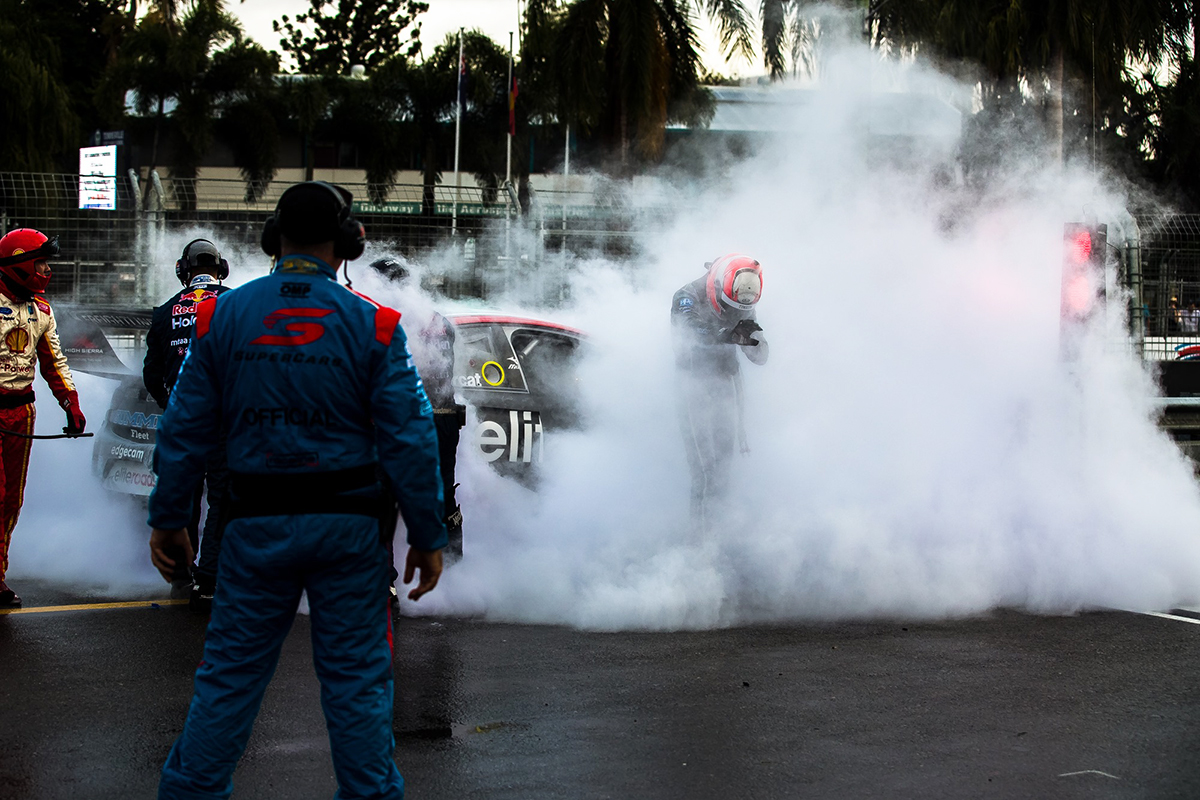 Scott McLaughlin and Shane van Gisbergen split the wins at the Watpac Townsville 400, but those performances – as good as they were – weren't really the weekend's big talking points.

The first ever wet race at Reid Park on Sunday, in particular, had plenty to dissect; a clash between McLaughlin and David Reynolds, Jamie Whincup's crash and Nick Percat's pitlane fire to name a few topics.

A powerhouse finding form again and young talent standing tall were among the other features of the second leg of Supercars' northern swing.

Rivalries are great. Think back to any given era of what's now Supercars and chances are you'll think of a battle along the lines of Ford vs Holden, Brock vs Moffat or Johnson, or Skaife vs Ambrose or Ingall.

McLaughlin vs Reynolds might not ever reach those heights, but it's been simmering away nicely in recent weeks and has the potential to be pretty tasty.

Podcasts, because everybody has one these days, have fanned the flames amid McLaughlin's dominant run.

On Friday in Townsville, McLaughlin said discussing podcast comments made by himself and Reynolds were "flogging a dead horse", but 48 hours later they were the story.

Reynolds looked down the inside of McLaughlin's Mustang into Turn 2 on the opening lap of Sunday's race in greasy conditions, and the pair made contact as a result.

McLaughlin picked up a puncture but got back to 11th and Reynolds lost four laps with steering damage, ultimately classified 20th.

Post-race, neither driver backed down about blaming the other, while stewards took no action.

The championship leader went to Reynolds' pit area and said the move was "just a desperado" on TV, while Reynolds was adamant McLaughlin moved over.

While McLaughlin is romping towards back-to-back titles, a feud between a pair of high-profile and leading drivers makes a compelling subplot. 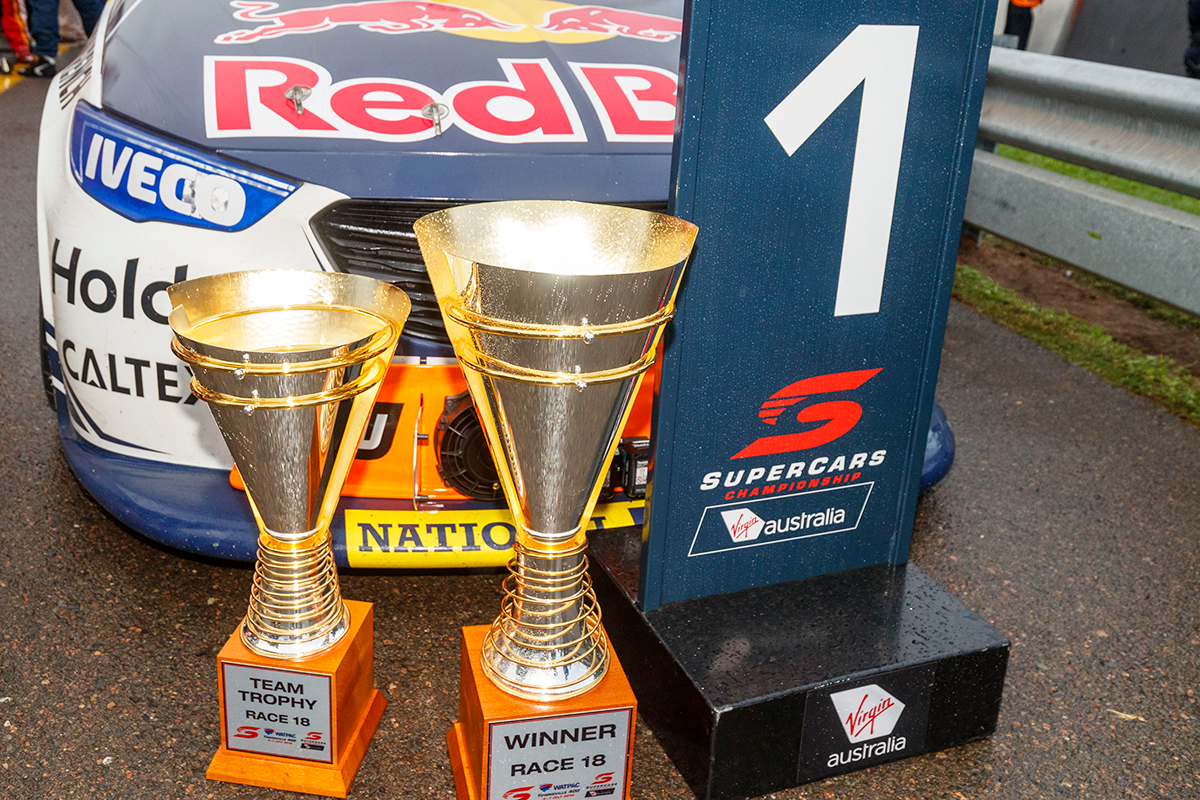 The Red Bull Holden Racing Team has been on the recovery trail through the first half of 2019, seemingly on the back foot thanks to new suspension rules.

There have been ups and downs, but the team headed to Townsville with just a single victory on the board, through van Gisbergen at Symmons Plains.

Townsville has always been a happy hunting ground for Triple Eight; Jamie Whincup and van Gisbergen split last year's wins and the former has won 10 in total at Reid Park.

So there was an element of 'if Triple Eight's going to strike back, Townsville will probably be the place' to the weekend.

In the end, the fruits of its 2019 trip were handy. Whincup finished second to McLaughlin on Saturday and van Gisbergen was on the top step 24 hours later.

Is Triple Eight back back? That's a little harder to answer.

Strategy helped Whincup lead into Saturday's final stint until he was outgunned, and he was very quick in Sunday's greasy conditions before crashing.

The rain, and varying levels of, along with McLaughlin's early incident cloud Sunday's form to a point.

That won't trouble Triple Eight while fresh silverware is added to the cabinet, but, as van Gisbergen said after winning, Queensland Raceway looms as an interesting indicator.

Through Supercars' first 10 events in Townsville, wet tyres were about as much use as a collection of old TV guides in an annex.

In the 11th, the grooved Dunlops got a serious workout, in Friday practice and then Sunday's race, when chaos reigned supreme.

Painted lines on the road surface caught many a driver out, contributing to a slew of the incidents across an afternoon when it was all-too easy to lock a brake.

Strategy played a big part, too, namely being able to clear minimum fuel-drop requirements during the change to wet tyres.

That the race finished behind the Safety Car following separate fires for Garry Jacobson's Nissan and Percat's Holden probably sums up the mayhem.

Yellows initially came out when Jacobson stopped on track with an engine failure, prompting pitstops by those with fuel to take.

Percat's blaze started due to an apparent fuel-rig failure as he arrived at his Brad Jones Racing pitbox, fuel flowing out of the hose before he'd even stopped.

When the hot car was dropped, the fuel ignited, sparking a fire that accompanied Percat down pitlane.

That is being jointly-investigated by Supercars, CAMS and BJR, but one thing that does not need to be questioned is the response to the fires.

At the original scene, BJR crew were accompanied by Walkinshaw Andretti United and Erebus mechanics in springing into action, while Triple Eight and DJR Team Penske personnel tended to Percat's Holden.

"There's no team hat on at that stage," T8's Mark Dutton said of the all-in response, which also included the dedicated pitlane fire marshals.

Job well done by all. 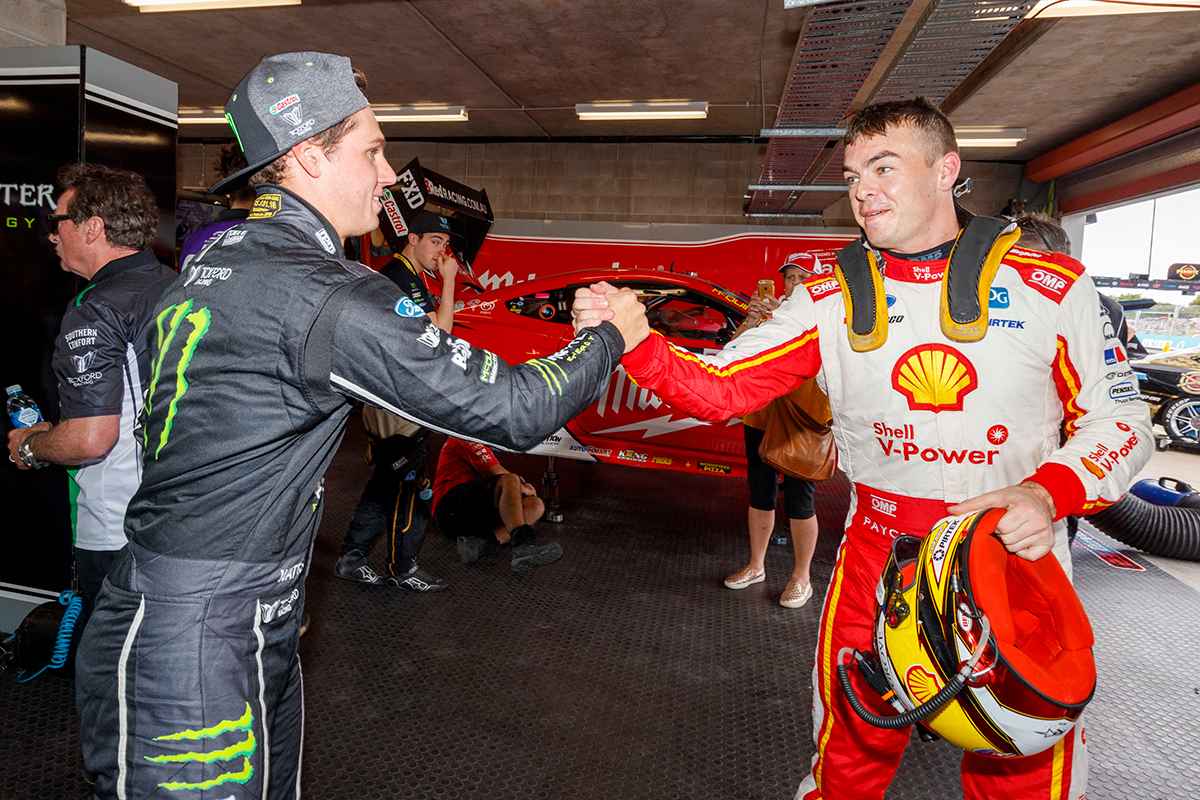 With a little help from my friends

Beyond the on-track mayhem, the big Townsville talking point was of Chaz Mostert's looming 2020 move to Walkinshaw Andretti United.

Losing a second star driver in as many years, following Mark Winterbottom's end-of-2018 exit, looks likely to be a big blow for Tickford Racing.

Especially as Mostert has led the line for the team for the last three years, and at 27 has a long future ahead.

But that will be eased somewhat by another of its homegrown talents, Cameron Waters, continuing to step up.

Tickford's torrid 2018 could hardly come at a worse time for Waters, who was one of the breakthrough drivers of '17 including taking his maiden victory at Sandown.

He is currently three spots behind Mostert in the standings – fourth to seventh – and Mostert has the team's only win.

But Waters is far from being overshadowed at the rejuvenated Ford squad.

Last Sunday he beat McLaughlin to ARMOR ALL Pole in the Shootout, which Mostert didn't even make, and led the opening stint.

A mid-race mistake while the effective leader hurt Waters' chances of winning, but he ultimately grabbed third, a fifth podium of the campaign.

It did, of course, follow a blot on the copybook on Saturday afternoon, when Waters spun Rick Kelly's Nissan and copped a penalty.

Overall, tough, Waters is standing up as a very capable team leader. 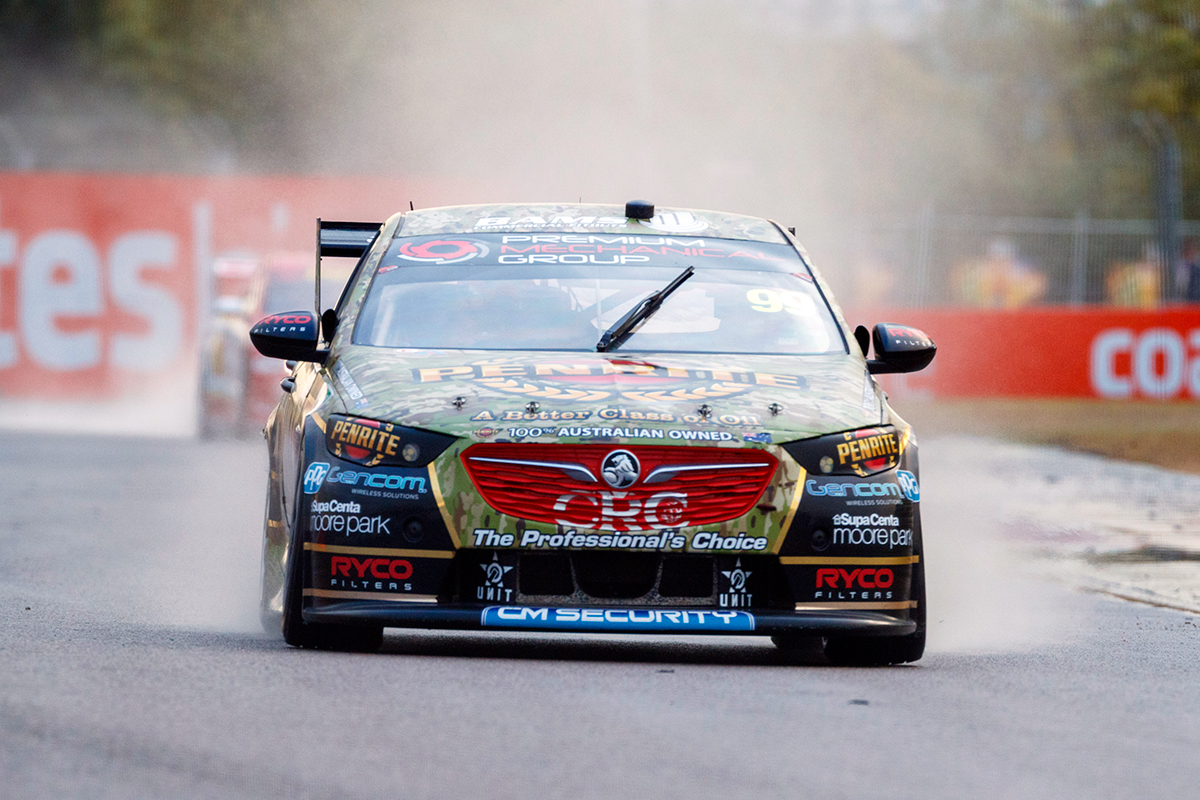 At 24, Waters is among the next generation of Supercars drivers coming through.

The notion of that is, admittedly, skewed by McLaughlin having only just turned 26...

Both 23, Anton De Pasquale and Todd Hazelwood put in star turns on Sunday and deserved to finish better than fourth and 16th.

De Pasquale was the first driver to take the leap onto wets, and the savvy call to do so during the Safety Car period paid off initially.

The Penrite Holden led by 35 seconds after the Waters-led pack pitted to change tyres under green, but with the caveat of needing to stop again for fuel.

Running off twice in tricky conditions did cut De Pasquale's lead, but he was far from alone in doing that across the afternoon.

A maiden victory was not forthcoming based on the extra stop, and he was pipped by Waters exiting pitlane under Safety Car conditions for the final podium place, classing fourth that as bittersweet.

Fourth is where Hazelwood started, after taking third in provisional qualifying and fourth in the Shootout itself.

He ran second on the opening lap and stayed in the top six through the first stint.

However a right-rear puncture picked up early in the second, after the Safety Car restart, quashed his hopes of a breakthrough race result. 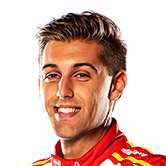