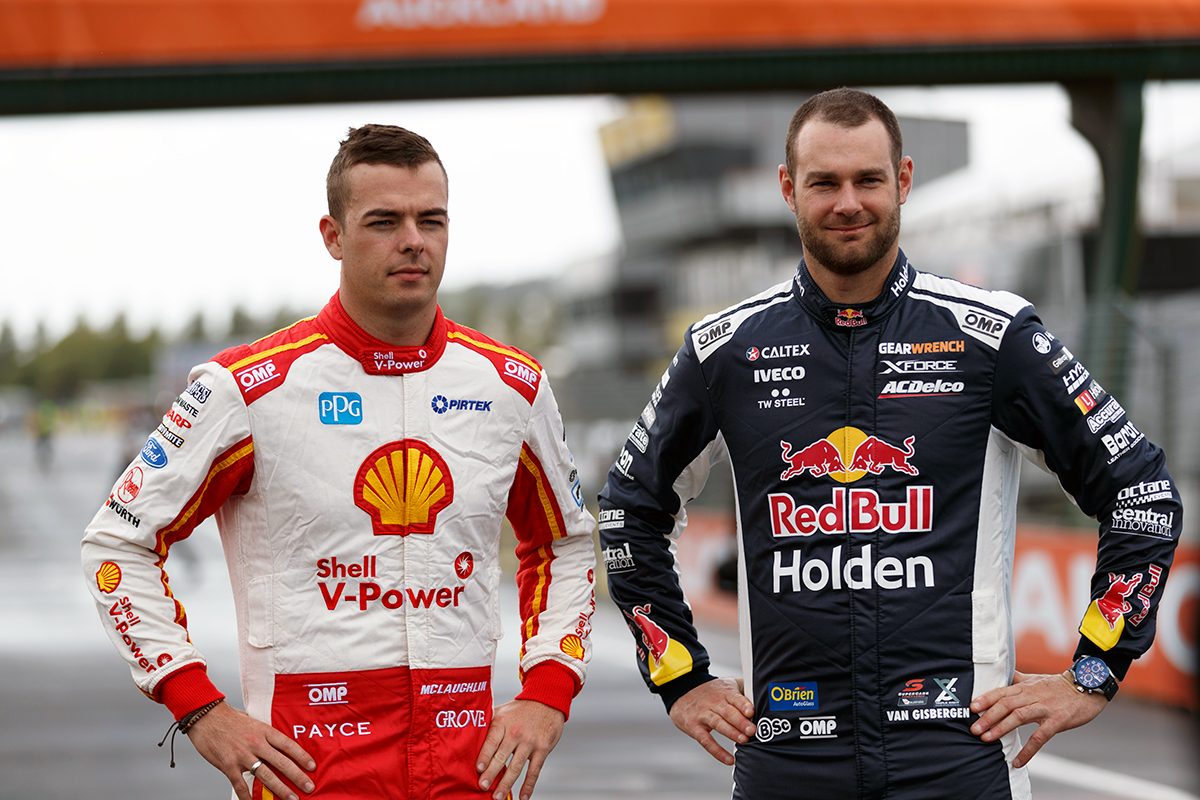 There was no shortage of on or off-track drama when the Virgin Australia Supercars Championship visited New Zealand for the ITM Auckland SuperSprint.

Title protagonists Scott McLaughlin and Shane van Gisbergen took a victory and a second apiece over the weekend, meaning the gap between them balanced out at 14 points.

On home soil and supported by a big and boisterous crowd at Pukekohe, the Kiwis were also the key players in the weekend's major storylines.

Van Gisbergen in particular was never far from the headlines, including a controversial pitstop, piece of parking and last-lap position change.

Supercars.com revisits a massive weekend that sets the scene perfectly for the Coates Hire Newcastle 500 finale later this month. 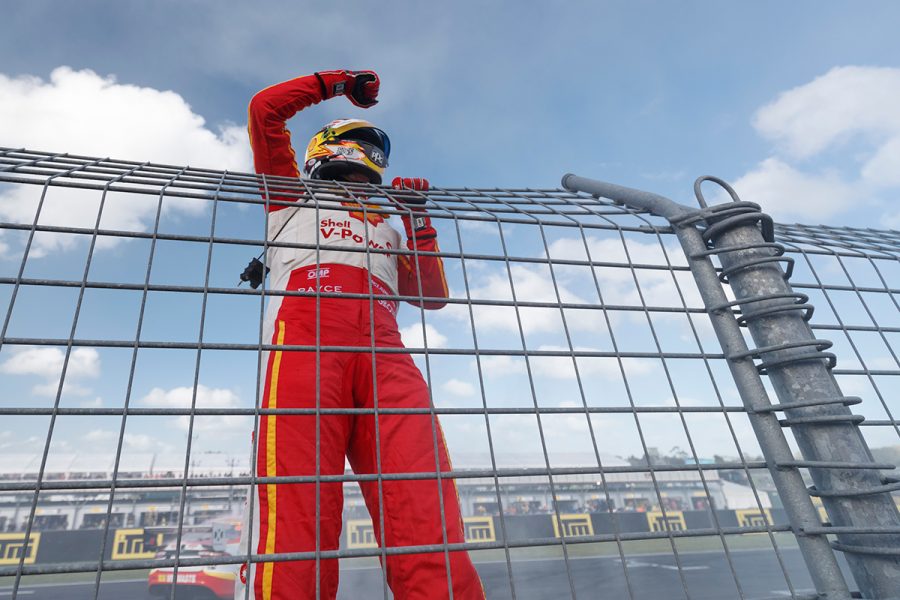 He regrouped on Saturday and claimed a 13th ARMOR ALL Pole of the year, but ended the day having been out-gunned by van Gisbergen.

Yes, the second pass did include contact for which van Gisbergen was handed a five-second penalty.

But even with that, van Gisbergen was charged away into the distance – and safety – in the closing gaps to win by 5.5 seconds, McLaughlin, on older tyres, unable to go with him.

Then there was that parc ferme incident and an unsuccessful protest by DJR Team Penske into van Gisbergen's second pitstop. More on those shortly.

All of that meant that when McLaughlin and van Gisbergen lined up for Sunday's race, they were split by just two points.

What followed, though, was a massively impressive performance from McLaughlin to take his first victory since Race 19 of the season, at Queensland Raceway.

He finished that July day 143 points ahead of van Gisbergen, who followed that with three-straight victories, launching a run that had him leading the points by Race 23.

McLaughlin has fought back since a quiet Tailem Bend and Sandown and Sunday's victory at Pukekohe is important on so many fronts.

It comes with the Jason Richards Trophy, and could hardly have been better-timed leading into the grand finale.

And he didn't do it easy. After getting ahead of Jamie Whincup during the second round of pitstops, he withstood serious pressure during the final stint, while van Gisbergen lacked outright pace and had a slow pitstop.

What's clear from here is that neither driver can afford a mistake in Newcastle.

Even after he beat the clock, van Gisbergen's Saturday victory was ultimately under a cloud into Sunday.

The results of the race were initially subject to an investigation into his second pitstop, during which the rear wheels of the Red Bull Commodore spun while the car was being dropped.

Rule 11.8.8.1, which states "the wheels must not be rotating while the Car is being lowered to the ground", came into question in what many deemed a black-and-white case.

What later came into light is a tolerance applied to these cases. Effectively that a wheel must complete a full rotation to be considered 'rotating'. 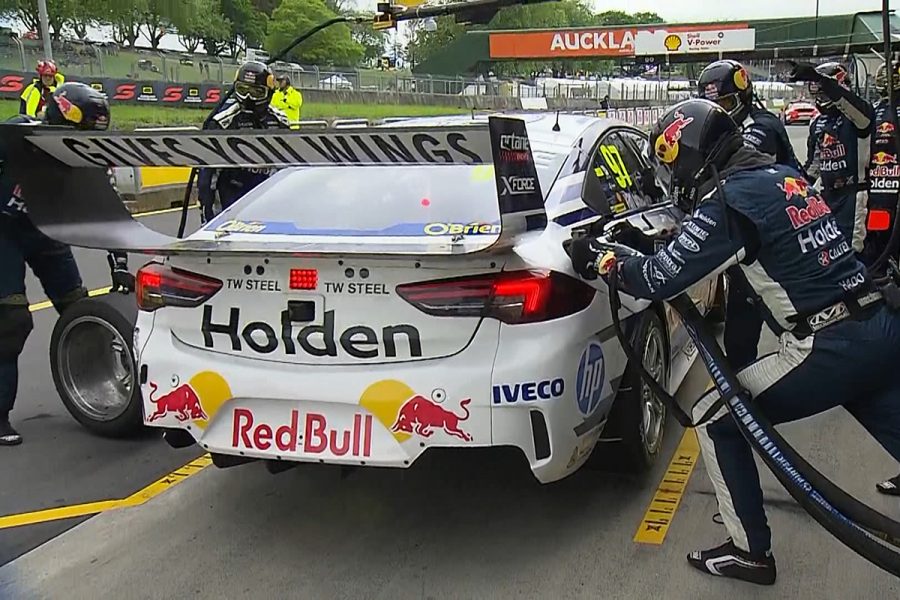 Deputy Race Director Michael Masi applied that, as was the case in a pair of cited precedents with David Reynolds' Commodore – one at Adelaide and an early Bathurst pitstop.

Masi's call to clear the #97 on Saturday evening was immediately protested by DJR Team Penske, with a stewards' hearing completed on Sunday morning.

The protest was unsuccessful, the outcome relayed just before the start of Sunday's race.

"There's been some precedents set and they're pretty clear," Roland Dane said.

"The fact is there are tolerances on an awful lot of our rules, but they don't always tell us there are those tolerances because otherwise, being race teams, we'll use them all up."

DJR Team Penske noted it had "no choice but to accept this decision", but responded in style in that afternoon's race. 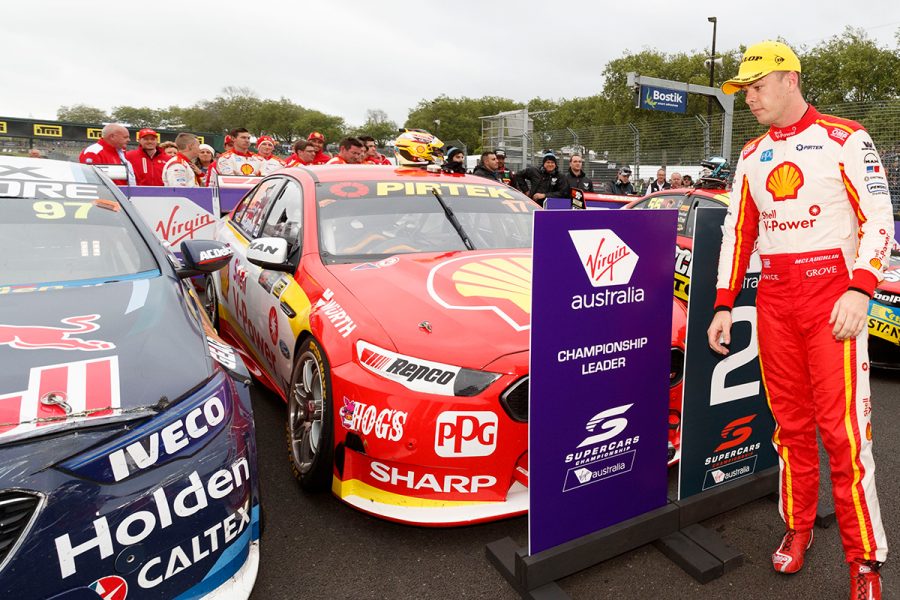 "The shit parking mistake turned out to be a big shit fight, more than I thought," van Gisbergen mused on Sunday afternoon.

Supercars champions Mark Skaife and Russell Ingall were in no doubt it was a deliberate act of intimidation on Fox Sports, a view shared by many on social media.

McLaughlin was clearly frustrated inside his car, from the time van Gisbergen pulled up alongside until his Falcon was pushed back so he could alight.

It did, after all, compound being beaten by van Gisbergen in a straight fight on home soil, with so much on the line.

Van Gisbergen said it was a mistake on his part and apologised, which McLaughlin accepted with good grace, even with a couple of playful jabs over the balance of the weekend.

There was no retaliation on Sunday, even though Triple Eight reminded van Gisbergen to open his door as soon as he stopped in parc ferme. Just in case...

It was just one of the spot fires that broke out in a high-stakes subplot to the 2018 showdown between the Kiwis. 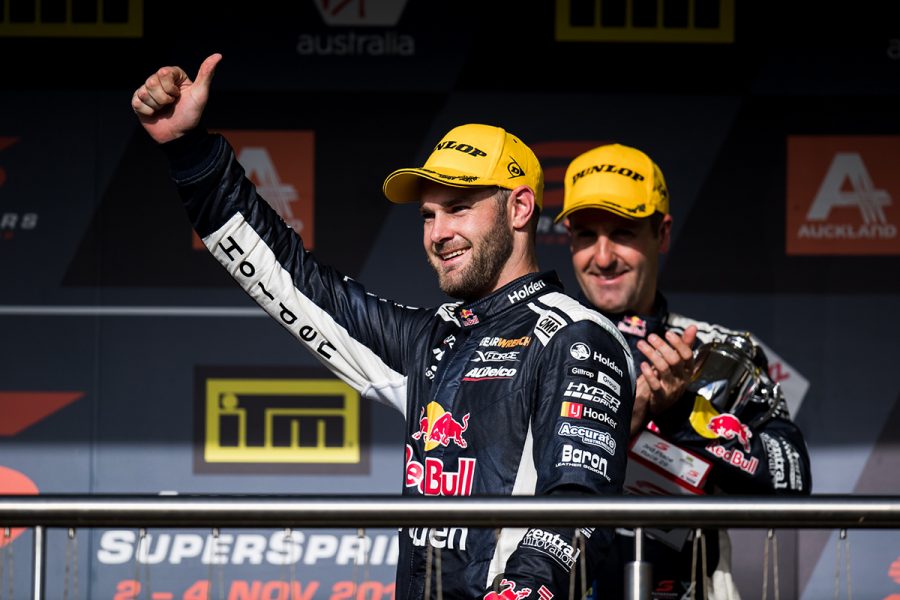 More fuel on the fire

Titles can be decided on fine margins; 2017's outcome highlighted the importance of grabbing what you can, when you can.

Twelve points changed hands between Whincup and van Gisbergen on the final lap on Sunday, and the value of that won't be known for a couple of weeks.

Whincup led the first two stints but was passed by McLaughlin in the second stops, as strategies played out, then spent the final stint trying to pass the Shell Ford. 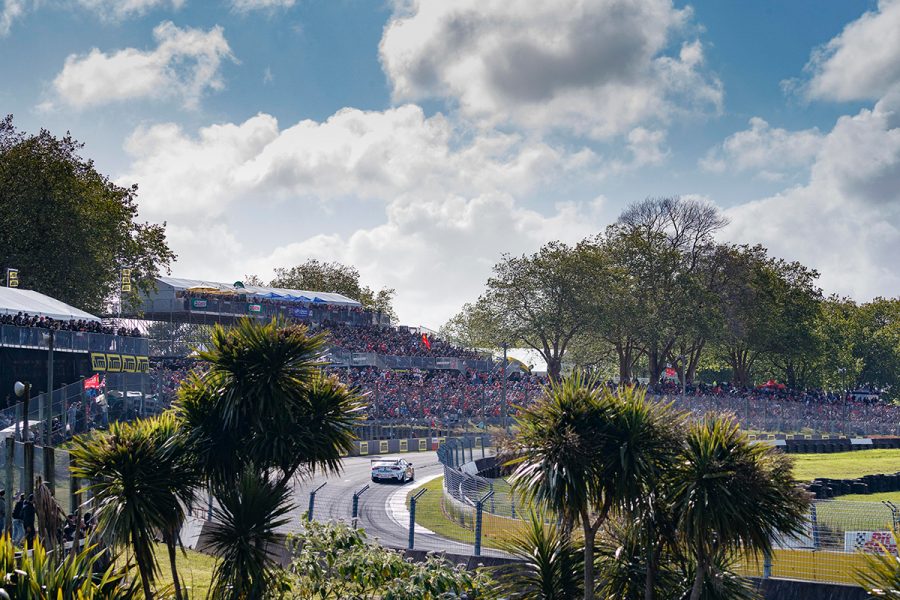 That was amid radio messages from Triple Eight including "Jamie's running out of fuel" to van Gisbergen, who started the final lap 12 seconds behind but beat his slowing team-mate to the flag.

Post-race, Triple Eight team manager Mark Dutton reiterated his outfit had genuine concerns over Whincup making it to the flag on fuel, denying it was a case of team orders.

Supercars rules prohibit "an instruction to a Driver or Team member... which may interfere with the race result", making such a switch a delicate manoeuvre.

Whincup, meanwhile, was more focused on the frustration of missing out on a race he felt he should've won, while McLaughlin said he wasn't fussed by the position swap.

"It is what it is," he said, "and I think we probably would have done the same." 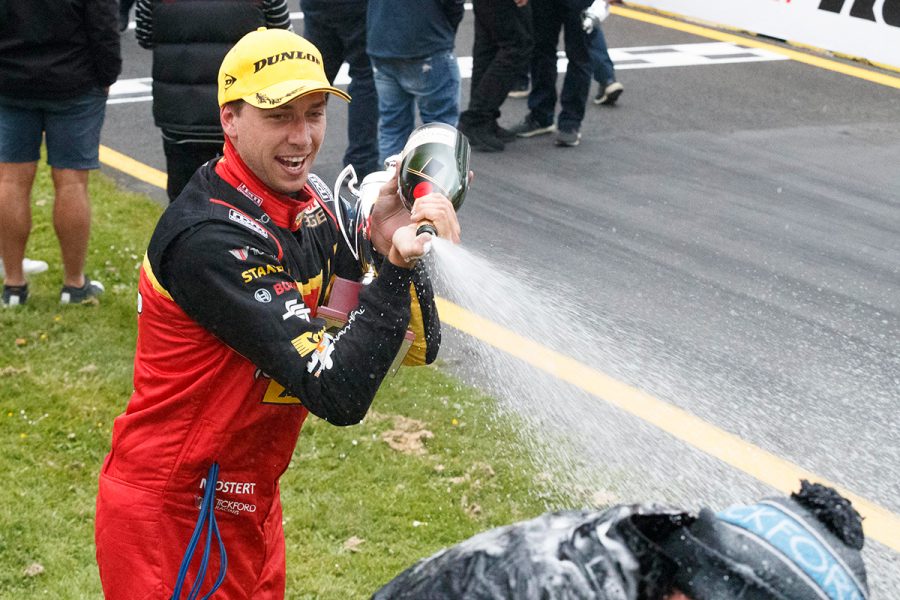 Tickford and Erebus lead the rest

Beyond the title fight and off-track mayhem, Tickford and Erebus fought it out for best-of-the rest honours.

Chaz Mostert and David Reynolds scored identical points for the weekend, with third and sixth and fourth and fifth respectively.

For Tickford, Mostert's Saturday silverware was the first time he's finished on the podium in consecutive races since the 2017 Queensland Raceway event, following his Gold Coast win.

It also makes it three strong weekends in a row, including fourth at Bathurst, as the Ford squad looks to salvage something from a below-par 2018.

Encouragingly, he wasn't alone in the top 10 each day, while rookie Richie Stanaway even made the Sunday Shootout.

Stanaway was joined in the single-lap run by fellow rookie Anton De Pasquale for Erebus. 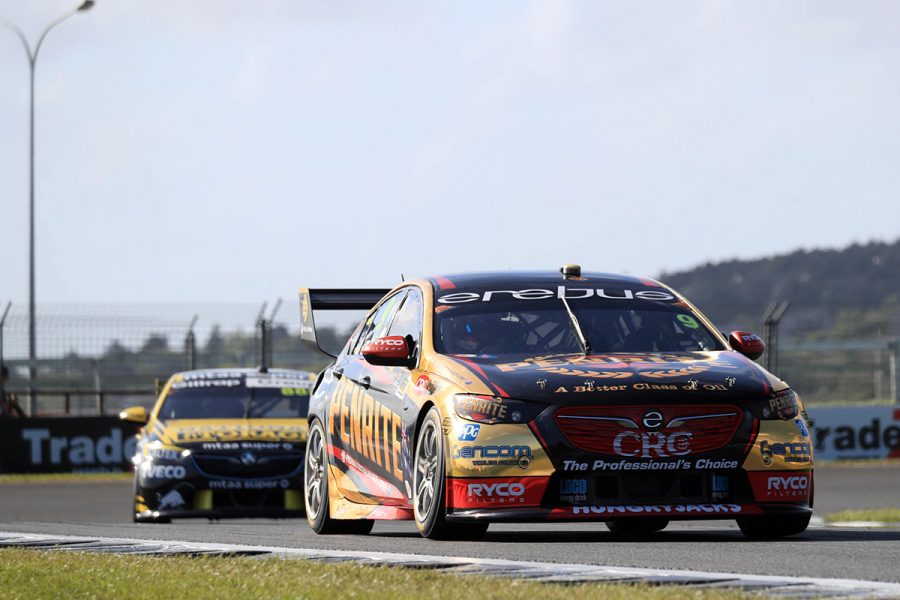 While a first-lap tangle cost De Pasquale dearly, Reynolds was strong again both days, only overrun by van Gisbergen and Craig Lowndes late on Sunday afternoon.

Further down the order, Walkinshaw Andretti United could not maintain the momentum it had built with podiums at Bathurst and the Gold Coast.

Qualifying woes left its drivers trying to fight from down the order, including lap-one stops for James Courtney each day – Scott Pye salvaging a sixth on Saturday.

Nissan was keen to bounce back from a disappointing PIRTEK Enduro Cup, but had to settle for a best of eighth on Sunday with Andre Heimgartner.

That was a timely result for the young Kiwi, amid uncertainty over the driving line-up at what reverts to Kelly Racing in January.