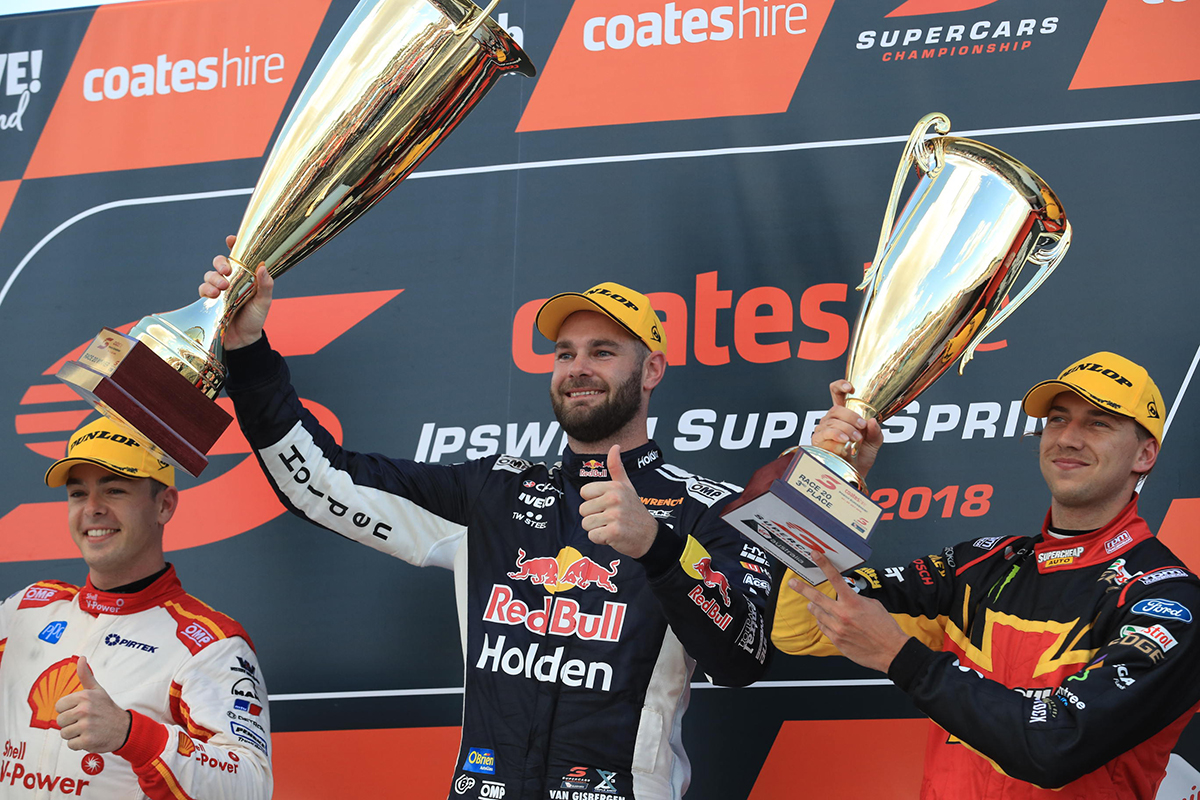 Supercars' hat-trick of northern events concluded with the Coates Hire Ipswich SuperSprint, and no change in the title fight between Scott McLaughlin and Shane van Gisbergen.

The pair recorded identical results at Queensland Raceway of a first and a second, and leave separated by the same margin – 131 points – they were before a wheel was turned.

It wasn't just about a draw at the top of the order, though, as Tickford Racing's Chaz Mostert finally recorded his first podium of the campaign.

Two teams further down the order, though, had weekends they would rather forget, as Supercars.com reviews the big talking points. 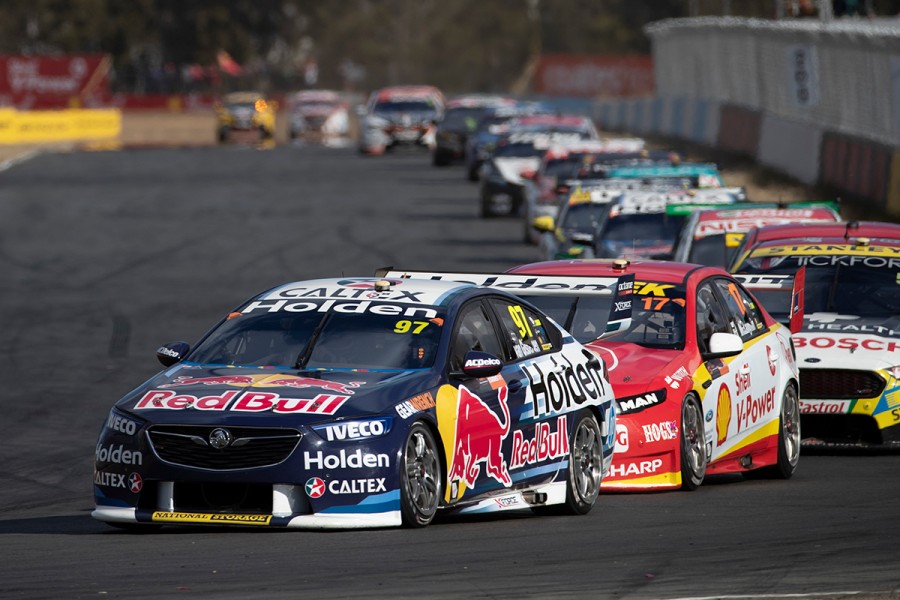 You won't see many better first laps this season than van Gisbergen's to go from eighth to third on Saturday.

He did most of the damage with a launch that had the 2016 champion yelling 'woo hoo', before crediting a new part with helping him get off the line.

It was far from a fluke. The #97 Commodore had cleared fellow front-row starter McLaughlin well before Turn 1 on Sunday, setting up his fourth win of the season.

Van Gisbergen, by his own admission, hasn't been on top of starts in Triple Eight Commodores since joining its customer Tekno from Stone Brothers Racing in 2013.

This latest "creature comfort" development, though looks to have changed that and leaves his rivals with some more thinking to do.

In their battle for the title, McLaughlin and van Gisbergen's matching results leaves the gap between them at 131 points.

They put some more air back to third place, though, going from David Reynolds 387 behind McLaughlin to Jamie Whincup, sitting 451 adrift.

Could Shell V-Power Racing have made van Gisbergen's life harder in the middle stint on Sunday?

You have probably seen the vision of Fabian Coulthard letting van Gisbergen past at Turn 6 on lap 24 of the 65, with his right indicator on.

Coulthard had pitted eight laps before his countryman, whose tyres were only four laps old, and was told "forget about him, let him through" by the team over the radio.

The instruction was duly followed, as Coulthard drove to a lap time in his fight against Craig Lowndes and Rick Kelly.

That's all good race management; as van Gisbergen said post-race there's no point getting into an unnecessary battle with someone you're not racing in the middle stint.

Coulthard's team-mate McLaughlin was, though, racing van Gisbergen – otherwise largely in clear air at the time – for the lead.

McLaughlin and van Gisbergen pitted on laps 35 and 37, the latter emerging ahead with a 1.5s advantage.

Track position was king from there, with McLaughlin getting close but unable to make a move.

Could van Gisbergen spending a bit of time – even a lap – behind Coulthard have made the difference later in the afternoon? 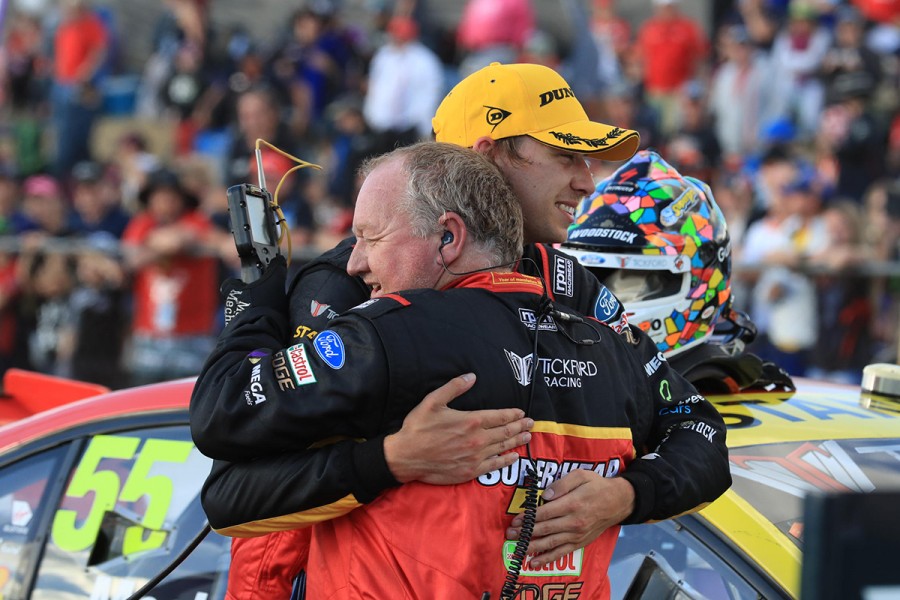 Champagne, not salvation for Tickford

As much as its personnel might dare to dream, Tickford Racing will know its second podium of 2018 through Mostert is just a step in its recovery.

The Ford squad has tested in public to get its Falcons back on the pace in recent months, with its drivers braving different development paths and ideas.

There have been some positive signs, and Tim Edwards was confident leaving Townsville that its improved form there wasn't specific to the street circuit.

He was right, and Queensland Raceway was probably its strongest weekend of the year.

Mostert led the way, but quipped more than once he didn't just want to be like the kid doing well at his home karting track, given his record there.

Qualifying in the top three both days was a big tick, as was the Supercheap Falcon's first podium in nine months with third behind van Gisbergen and McLaughlin on Sunday.

Those lessons will be paired with what was gleaned from Mark Winterbottom and Cameron Waters on a different program.

Winterbottom is hopeful the team can "fast-track our understanding of what’s working and what’s not".

There might well be some more pain, but a little bit of sugar never hurts. 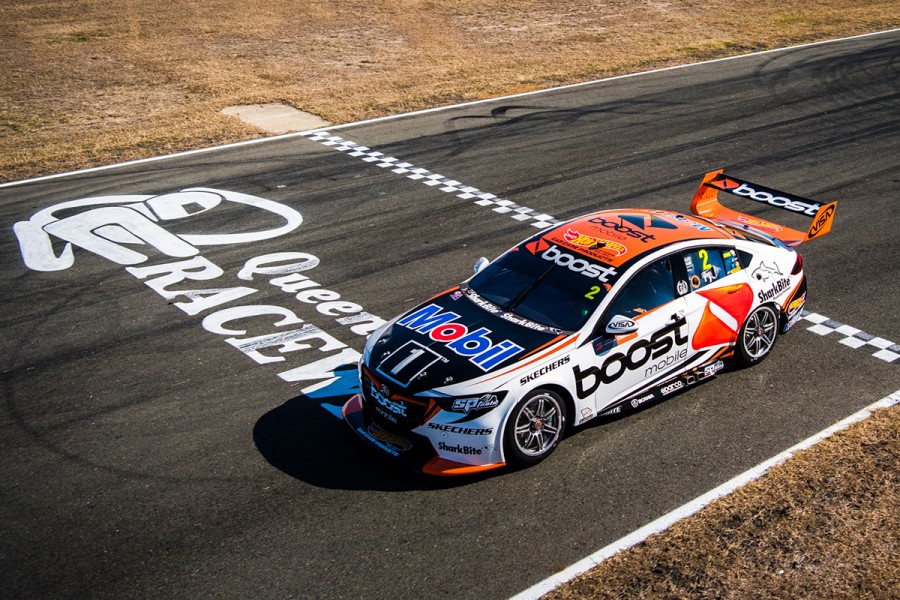 Having started the season so well, with podiums at four of the first six events, Mobil 1 Boost Mobile Racing has hit a lean run.

A lack of a test day with the new ZB Commodore, while it waits for big-ticket development items, is starting to hurt.

The only shot the team fired at Queensland Raceway was self-inflicted, at Turn 4 on the opening lap of Sunday's race.

Scott Pye's move down the inside of James Courtney resulted in contact and led to Courtney turning Winterbottom's Tickford Falcon around.

While Pye continued to 19th, his fifth-straight race out of the top 10, Courtney later retired after lengthy repairs, having at least finished eighth on Saturday.

The 2010 champion took aim at his team-mate on TV, and it would have been a stern debrief, either side of a lengthy visit to the stewards' hut in which no driver was deemed wholly at fault for the incident.

Pye has fallen from sixth to ninth in the points across the three northern events and Courtney from ninth to 12th, as that early-season form becomes the target again rather than the norm. 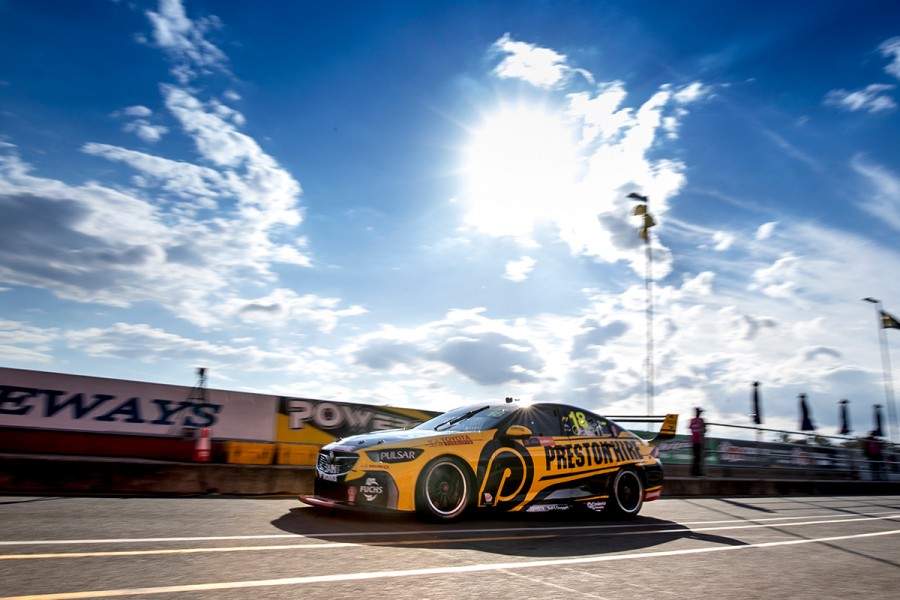 It's tough going in Supercars, with the entire field covered by a scant 1.0802 seconds in ARMOR ALL Qualifying on Sunday.

It's especially hard work for the single-car outfits. Preston Hire Racing is mired in a forgettable year that is rapidly passing without change in its fortunes.

Lee Holdsworth is 21st in the points, having started 25th and 21st and finished 24th and 21st at Queensland Raceway, with that qualifying form its biggest challenge.

The team can't get Holdsworth's Commodore into the set-up window, with the change of tyre construction, shift to the ZB aero, and its move away from Triple Eight front-end components.

Holdsworth grabbed five top 10 finishes from eight races on the run home in 2017, while 11th at Symmons Plains is his best of the current campaign.

Matt Brabham finished at the foot of the times in Friday morning's co-driver session, and has since been replaced for the PIRTEK Enduro Cup by Jason Bright.

Charlie Schwerkolt and his outfit will be hoping to turn things around sooner rather than later.