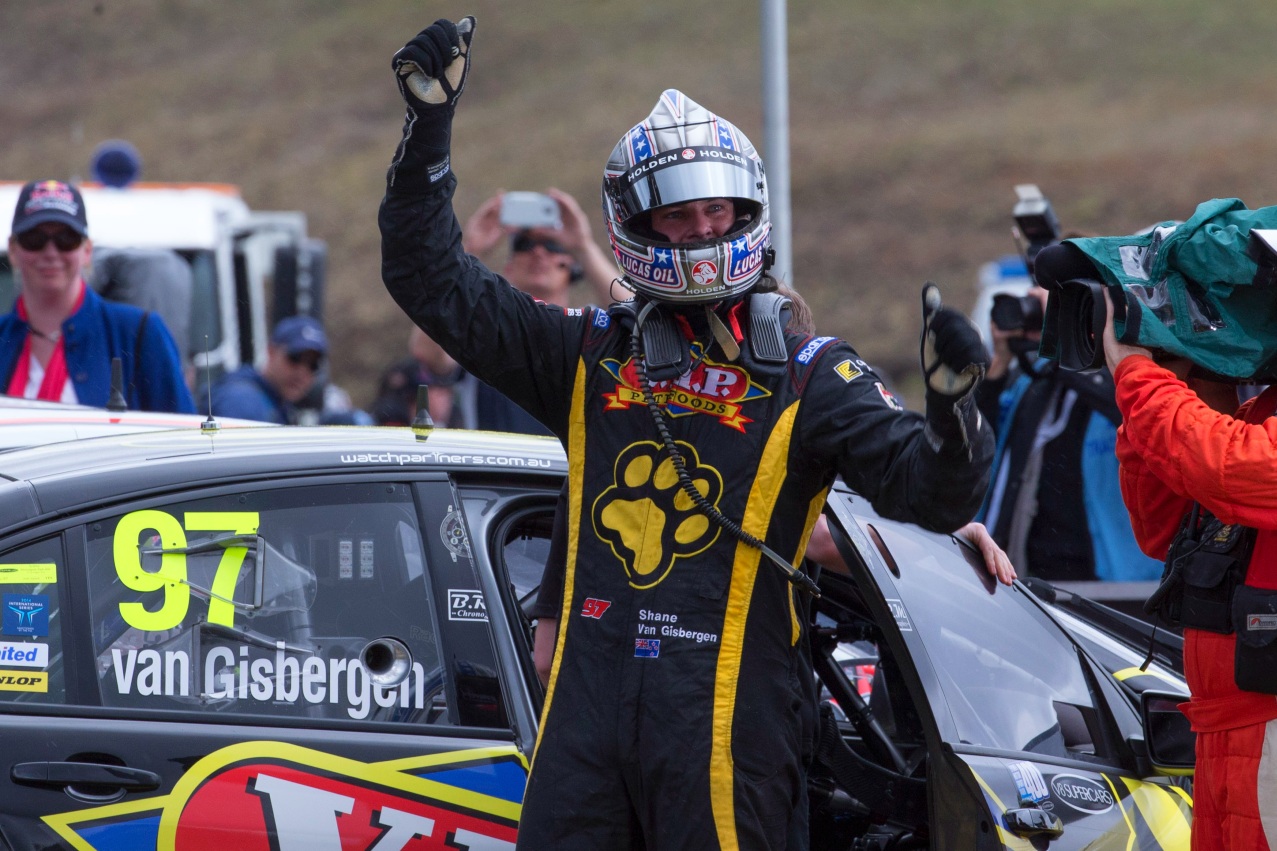 Of his 51 career wins, Shane van Gisbergen’s dual victories at a sodden Sydney Motorsport Park in 2014 remain two of his best.

On August 23 seven years ago, a 25-year-old van Gisbergen was the class of the field on a chaotic day in Sydney.

Driving for Tekno Autosports, van Gisbergen was imperious in the dicey conditions, holding off the likes of Jamie Whincup and Chaz Mostert in two tricky sprints.

Van Gisbergen’s wet weather mastery was on show as recently as March’s Sandown event, and he made his presence felt on debut as a teenager at Oran Park. 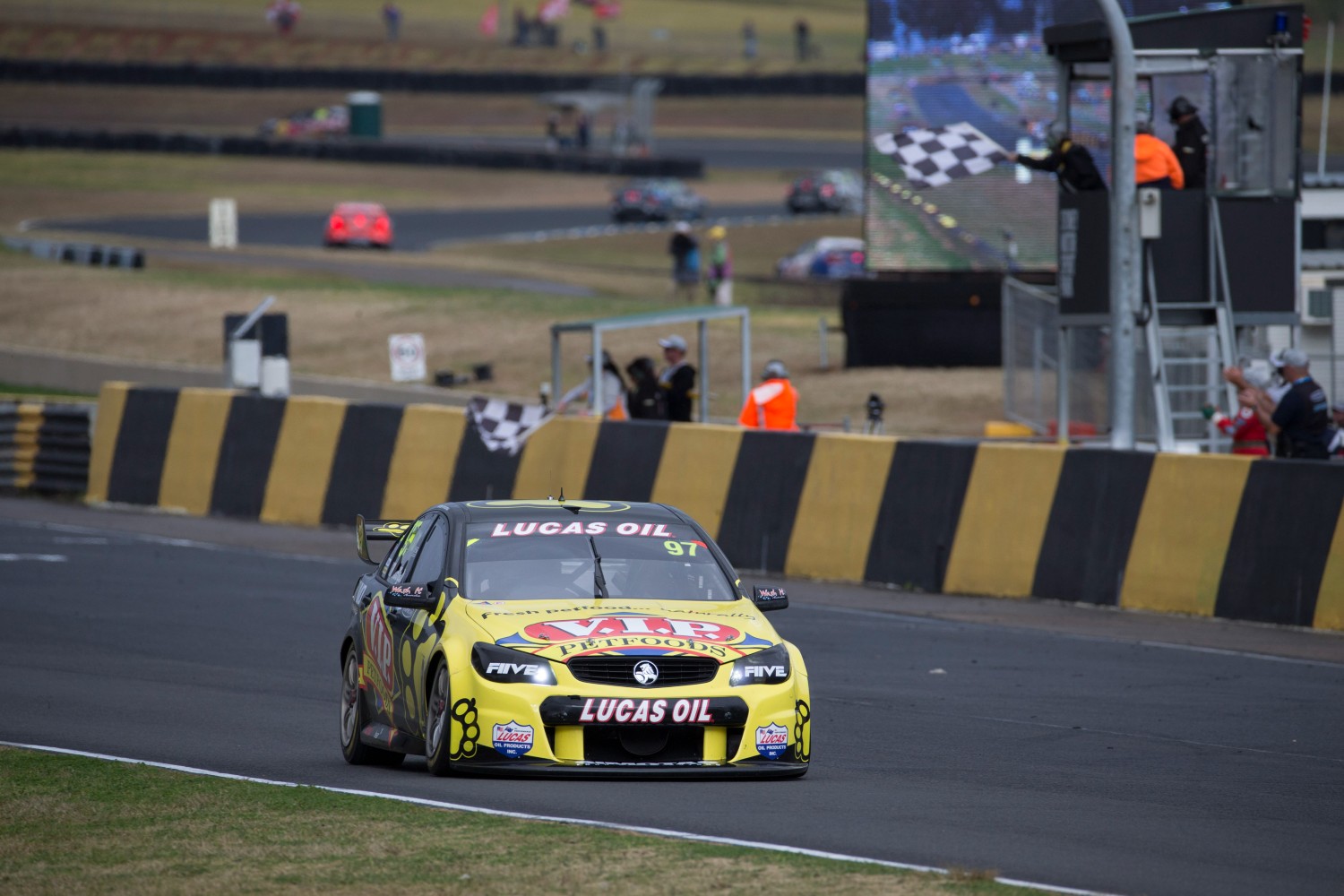 Seven years after his debut in the rain, van Gisbergen’s double Sydney delight validated his car control prowess, even if he later admitted he ‘hated’ driving in the wet.

To the 2014 Sydney event, the championship had taken several twists and turns, with Whincup moving into a clear lead after a dramatic Ipswich event.

Van Gisbergen surged from sixth on the grid to win the first race of the day following an error from Whincup.

Rain began to fall an hour before the start, leaving the field facing a treacherous first lap.

The first wet Supercars race since 2011 continued to unravel; van Gisbergen slipped by McLaughlin on the restart, before McLaughlin suffered an engine failure.

It came after Whincup bowled a major wide, gifting the lead to van Gisbergen on a platter. 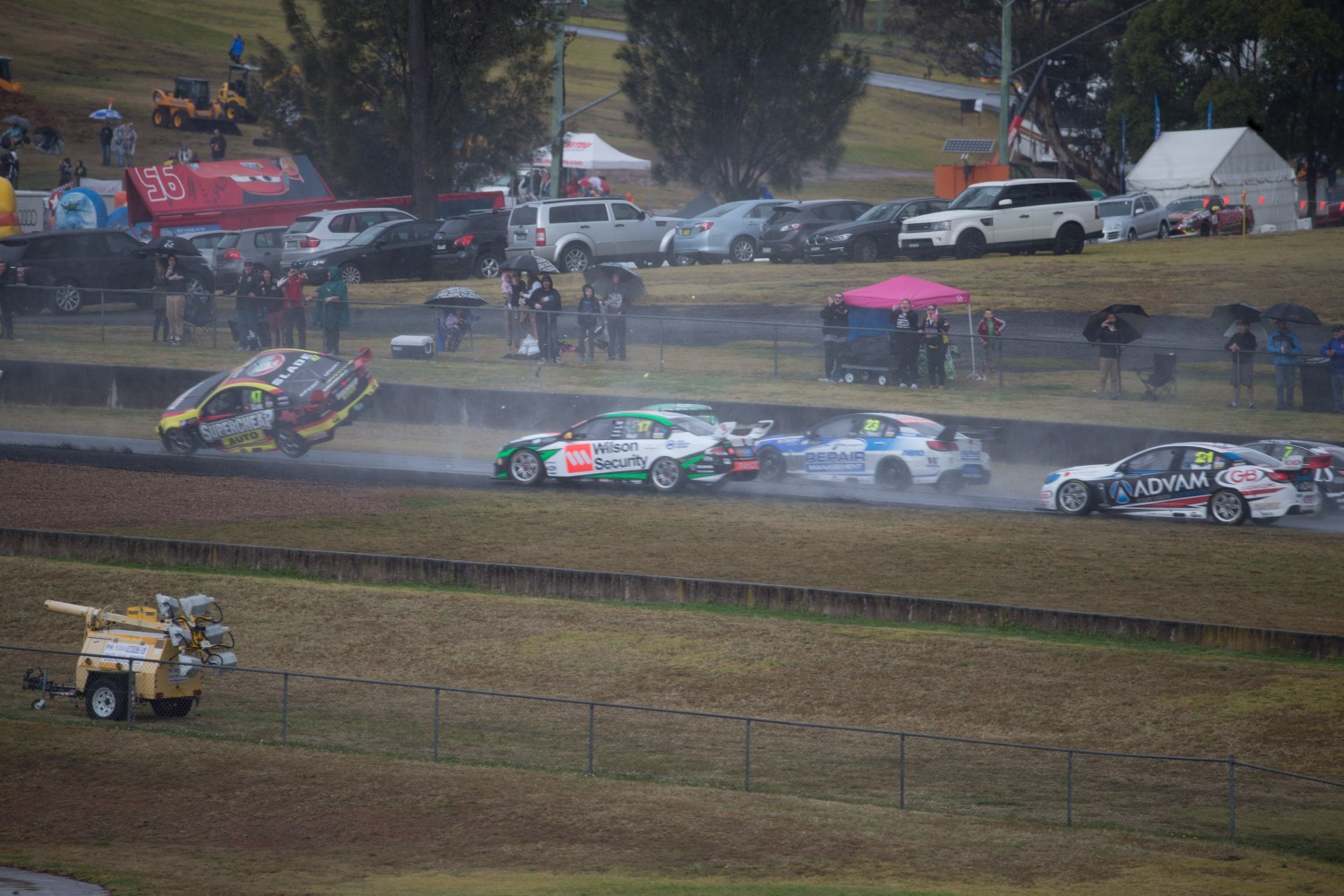 Craig Lowndes moved into the podium positions through the pit cycle, with Garth Tander firming for a trophy of his own after starting 14th.

Van Gisbergen, however, was peerless, claiming his first win since his Pukekohe breakthrough earlier in the season.

Smarting from his engine failure in the first race, McLaughlin launched from pole for the day’s second race in more challenging conditions.

Van Gisbergen, though, fired past McLaughlin, Whincup and Fabian Coulthard with a remarkable start on the run to Turn 1. 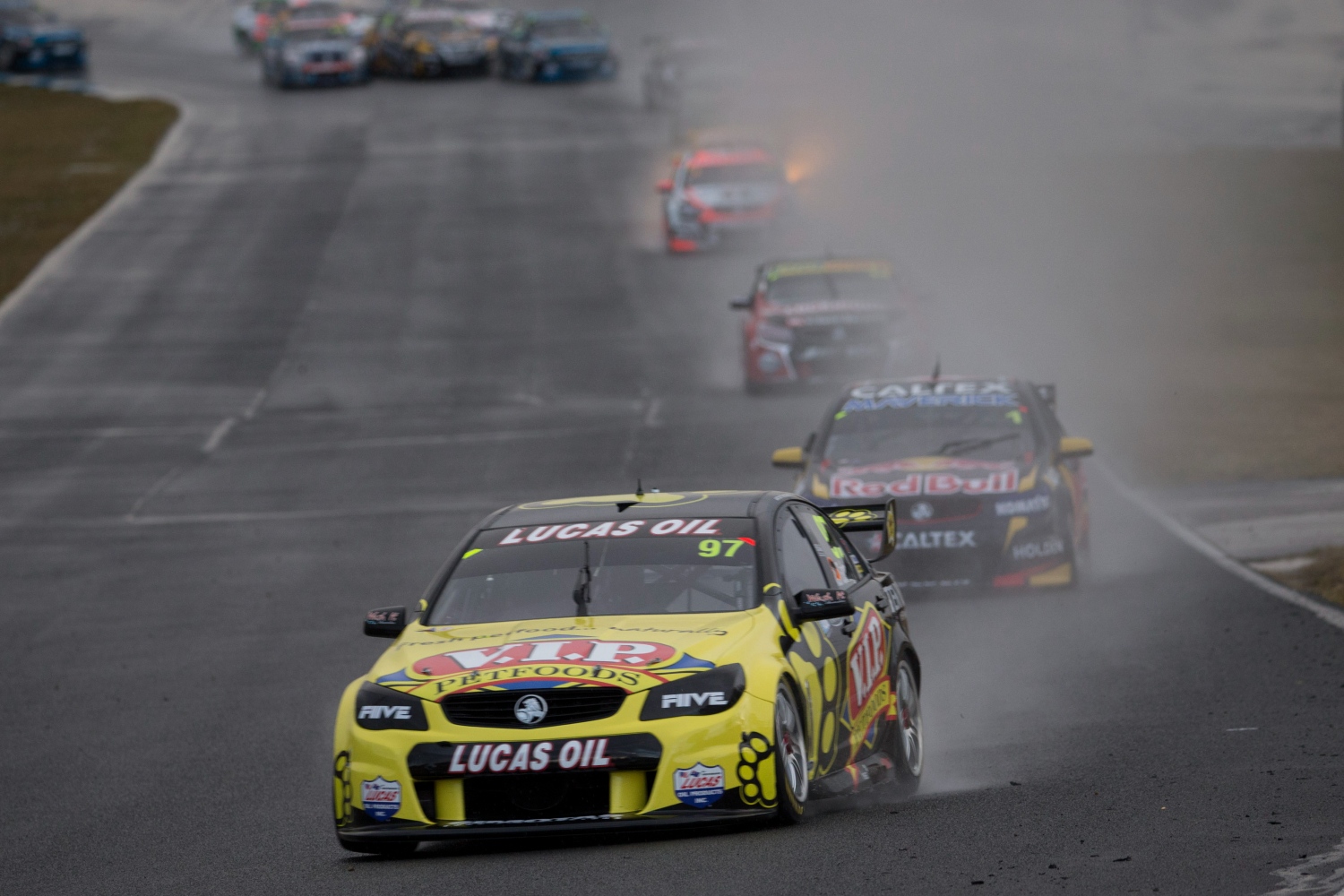 McLaughlin’s heartache would continue, with the #34 Volvo shedding its right rear wheel towards the end of the first lap.

It got even worse for Garry Rogers Motorsport, with the Safety Car deployed following a heavy accident for Robert Dahlgren.

Van Gisbergen made a strong restart and streaked away, with Coulthard displacing Whincup for second.

James Moffat, a pole sitter at the previous event in Ipswich, firmed for a podium but threw it away with a mistake.

It allowed Mostert, who had started 11th, to close on the podium battle.

Coulthard fell behind Whincup and Mostert, who moved past the series leader following a second error of the day from Whincup.

Van Gisbergen had eked out a six-second lead, which was wiped out when the Safety Car was called following an incident between Scott Pye and Michael Caruso.

Desperate to atone for his mistakes, Whincup tried to move past van Gisbergen at the restart, but only allowed Mostert to take second.

Tander’s day was ruined after contact with Todd Kelly at Turn 2, with Russell Ingall and Nick Percat also coming to grief. 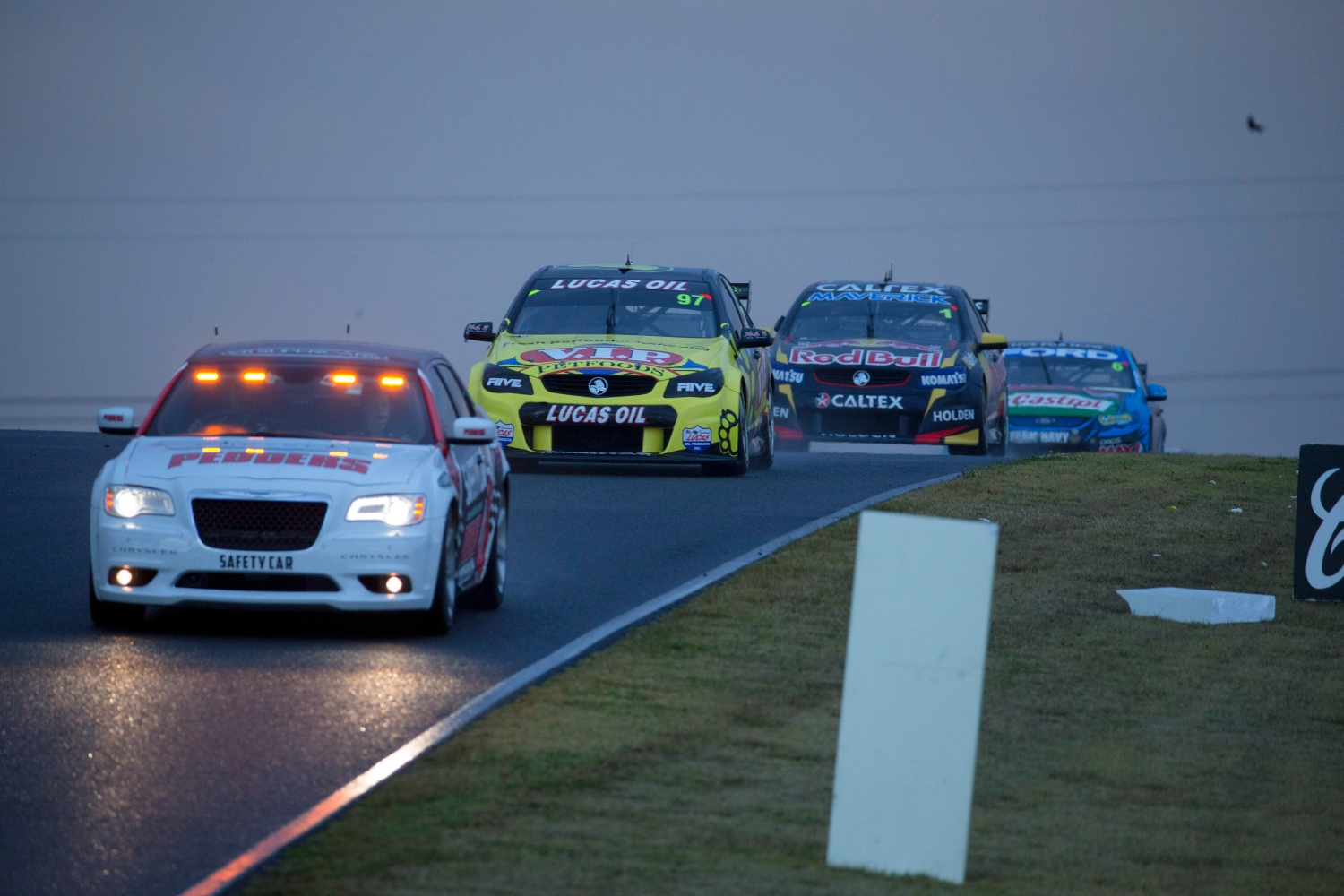 Van Gisbergen weathered the storm to win again. He had taken his career win tally from five to seven on the same day, his first win coming in similarly tricky conditions three years earlier.

The Kiwi, along with Mostert and Whincup, celebrated the result with synchronised drifting around the circuit.

"I had to fight for it in the last one. After the Safety Car my tyres were gone and I could see Chaz doing some good lines in the mirror.

"I copied him a bit and just held him out.”

The dominant performances led to questioning of why he loved wet weather driving, but van Gisbergen answered in pure coy van Gisbergen style.

"I hate driving in the wet, but for some reason, I'm all right at it," he said after the race.

"It rained almost every race in Formula Ford back in New Zealand.

"Sitting in an open-cockpit car, that was the worst.”

The Repco Supercars Championship will return to Sydney Motorsport Park in November for the Beaurepaires Sydney SuperNight.